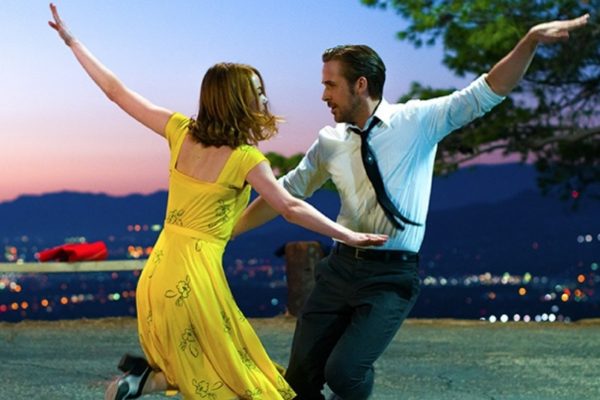 The world seems pretty dark these days but remember: It’s in darkness where we dream most vividly. And no film this year has captured the hearts and minds of weary audiences quite like the Technicolor musical La La Land. The movie follows two also-weary yet optimistic Hollywood dreamers, actress-writer Mia (Emma Stone) and jazz pianist Sebastian (Ryan Gosling) as they navigate the highs and lows of life, love, and art in perpetually sunny Los Angeles. A cinematic love letter to such classics as Singin’ in the Rain and The Umbrellas of Cherbourg (a primary influence on wunderkind director Damien Chazelle), La La Land seduces viewers into its dreamy, old-fashioned take on Tinseltown romance with bright colors and snazzy song-and-dance sequences even if its tale is one of yearning and heartbreak.

[amazon template=right aligned image&asin=B01MPXX9GE]While La La Land seems old-fashioned, it’s actually not. Sure, Mia and Seb may go rapturously floating off into the stars at the Griffith Observatory, but Chazelle ultimately keeps the emotional reality firmly planted on the ground. This is especially true of scenes depicting Mia and Seb’s career struggles, which Chazelle wisely chooses not to sweeten. Much like in his superb 2014 Academy Award-winning Whiplash, Chazelle highlights the brutal truths alongside the artistic triumphs. Down-on-his-luck Sebastian takes on a string of thankless gigs playing Christmas tunes at a restaurant or key-tar in an ‘80s cover band. Mia runs from her barista job countless emotionally demeaning auditions. Both seem to be searching for something real amidst the artifice.

And this is where Ryan Gosling and Emma Stone especially shine. For their third onscreen pairing, Stone and Gosling have an easy rapport that recalls screen legends like Bogart and Bacall or Hepburn and Tracy, and it’s not just zippy lines. Their trust in one another allows for an emotional rawness and freedom that is entirely modern. The always-charming Gosling unearths Seb’s cynicism while Stone, who is quickly turning into one of Hollywood’s most valuable players, captures Mia’s optimism and ache in equal parts. What unites it all, however, is the music.

That musicality extends to the visuals, especially the often rhythmic editing from Oscar-winner Tom Cross who also edited the jazzy Whiplash. And the cinematography from director of photography Linus Sandgren is gorgeous; full of purplish, hazy sunsets, jazz club neon greens and blues and bright, MGM-style soundstage musical sequences in vivid color. It’s the most beautiful and sumptuous Los Angeles has ever looked on film and with a lovely, affecting score from Justin Hurwitz, it sounds pretty good too.

It’s no surprise the feel-good film has become an audience favorite and critical darling, picking up BAFTA nominations, Critics Choice Awards, and a record seven Golden Globe Awards including Best Picture, Director, Actor and Actress. It was already considered an Oscars favorite before it was announced Tuesday that the film had picked up a record-tying 14 nominations, including all the major categories. If many Academy Awards predictions come true, La La Land may just sing and dance its way into the L.A. sunset with quite a few golden statues; a fitting, triumphant end to Mia and Seb’s magical Hollywood romance.

PS. Two other major contenders at the Oscars this year will be Moonlight and Manchester by the Sea. Read our post about Moonlight here and check out more about MBTS’ leading man, Casey Affleck, here. Plus, don’t miss our post on the Oscar-nominated documentary 13th.

0 comments on “Here’s to the Ones Who Dream: The Magic of La La Land”