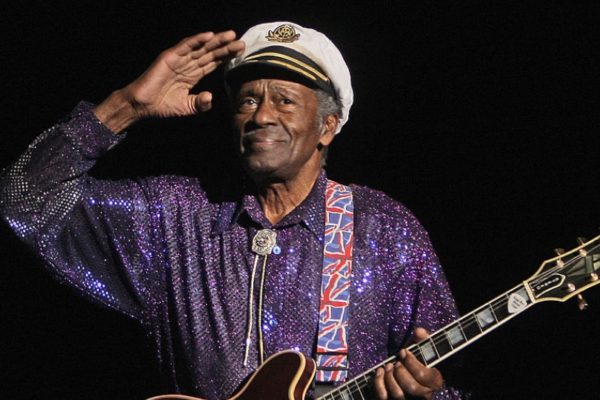 When Chuck Berry passed away in March, many obituaries referenced him as the “Father of Rock and Roll,” and Rolling Stone’s cover story on the legendary guitarist featured the title prominently. Hopefully, enough time has passed to explore the topic more fully, and this month is Father’s Day to boot, so it seems a good time to explore whether Berry is indeed Rock and Roll’s big daddy and, if not, who the title’s proper bearer is. It’s a debate almost as old as the music itself, and while we don’t claim anything approaching final authority, it’s always a fun subject to reinvigorate.

So, who are the men most cited as the father of rock and roll, and which of them have legitimate claims? It turns out that while Berry is one of a handful of men regularly name-dropped as The Father, the others certainly have a claim to stake. The following list explores the five men most likely to hold the title, as well as the validity of those claims. Enjoy!

1. Robert Johnson
Everybody knows that bluesmen like Muddy Water, Howlin’ Wolf and Big Joe Turner and their peers played outsized roles in creating early rock and roll. But when you peel back a few layers, you see Robert Johnson sitting in the center (or, if you prefer, the crossroads) of everything. If it’s true – and it most assuredly is – that rock and roll was impossible without the blues, it’s also true that there is no blues music without Johnson.

Does that give him a credible claim on the mantle? Only in the most roundabout way. It’s probably more accurate to think of him as rock and roll’s grandfather than anything else, which probably provides cover to his adherents.

2. Ike Turner
Now we’re getting somewhere. As with the “Father of Rock and Roll” debate, the “First Rock and Roll Record” has any number of different songs that could be the one. But Turner’s 1951 hit “Rocket 88” is easily the most referenced of the small group of contenders. And, to be sure, it’s a rockin’ little record your jockey would be wise to play.

Here’s the catch, though: Plenty of people, Turner included, don’t think of the record as being rock and roll in the sense that the music came to be known. Turner always considered it a straight boogie record, and do you want to be the one to tell him he was wrong, even a decade after his death? No, you most certainly do not. It’s hard to have a father of rock and roll who denies his own parentage. And Turner despised Berry for self-consciously appealing to white kids, which tends to put a damper on rock and roll’s loftier ideals.

Despite all of this, Turner remains a constant part of the discussion, and not without reason. Hard to see that changing at this late date.

3. Little Richard
Even today, more than six decades after the fact, Reverend Penniman’s early records scream (and, it should be noted, Little Richard himself did as well) with the debaucher and wild abandon that came to define what great rock and roll was intended to be. In the best sense of the words, Little Richard was a complete raving lunatic. And, he often describes himself as (among other things) the “originator” of rock and roll. In terms of sound and attitude, he’s got a point.

Unfortunately, his first single, “Tutti Frutti” debuted in November 1955, making Little Richard a little late to assume the title. Using Little Richard as a demarcation point between the relatively pedestrian sound of Ike Turner and Chuck Berry and Fats Domino and the raging, orgiastic melee that he introduced, the title begins to make a lot of sense and ensures his place in the discussion.

4. Elvis Presley
Can The King of Rock and Roll serve double-duty as The Father of same? It’s hard to think of any good reason why not. More than two decades of revisionist history have left a generation rock and roll fans dismissing any idea that Elvis could qualify as father of a genre due to, among other things, his relative lateness of getting into the rock and roll game (he wouldn’t record “That’s All Right” until mid-1954).

The truth is more complicated. In many parts of the country, playing “race records” was largely unthinkable for white disc jockeys, and Elvis provided an introduction to rock and roll that simply wouldn’t have been possible for Ike Turner or Chuck Berry. His co-opting of black music and playing it to a white audience not only foreshadowed English groups like the Rolling Stones and the Animals, but also proved to black audiences that, yes, a white man could sing the blues credibly. If Elvis isn’t the father of rock and roll, it’s because somebody else got there first.

5. Chuck Berry
What, like we’re not going to include him here? Despite his many rivals for the title, the simple fact is that if anybody can truly be called the Father of Rock and Roll, it’s Chuck Berry. As the first major rocker to write his own songs, play showy guitar solos and make teen angst a thing, Berry provided the blueprint for what was to follow. He was prickly even before getting arrested and jailed on trumped-up charges and having various and sundry white musicians steal his licks, making him the first rocker to provide the anti-authoritarian impulse that defined the music. Despite everybody on this list (and plenty of others) having some claim on fatherhood, Berry stands alone on the top. Without him, the music just plain doesn’t exist. Happy Father’s Day, Chuck!