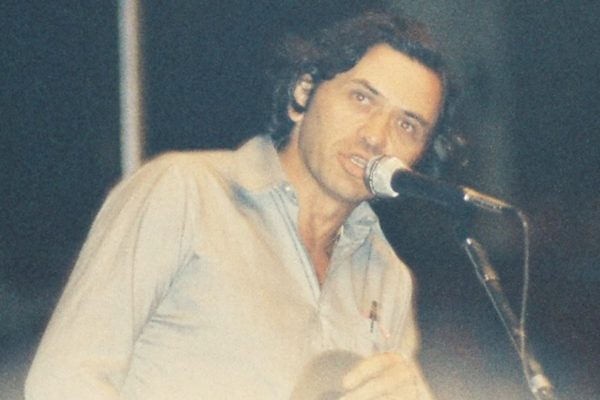 The logistics of rock ‘n’ roll music aren’t super sexy. At concerts, most audience members are much more focused on what’s happening in the moment, jamming along to whoever has the volume cranked up the loudest. But it likely took a village to organize the show you’re seeing, or it might have taken just one Bill Graham.

The list of bands associated with Bill Graham’s name is endless: The Grateful Dead, Janis Joplin, Jimi Hendrix, Santana, The Rolling Stones, and so on and so forth. Now, an exhibition of photography, film, concert posters and other memorabilia comes to the New York Historical Society. Titled Bill Graham and the Rock & Roll Revolution, the exhibit immerses visitors in an audio-visual tour of Graham’s legendary career as a rock promoter.

Born in Berlin in 1931, Graham fled Nazi Germany at the age of 10 and originally came to New York City. Shortly after, he moved to San Francisco just as the hippie movement began to gain some momentum and it soon became clear that Graham would be a part of it. In his early years, Graham served as a manager for various acting troupes and bands. By the time the 1960s rolled around, Graham had taken over the lease on the Fillmore Auditorium in San Francisco, where he hosted dozens of sold-out shows from groups like Cream, The Doors, and Jefferson Airplane, but also included more diverse acts like Otis Redding and B.B. King. The exhibit features numerous classic psychedelic concert posters from that era.

“I never give the public what it wants,” he famously said. “I give it what it should want.”

But Graham’s influence soon found its way cross-country and in 1968, he opened what many New Yorkers still regard as one of the city’s musical cornerstones: The Fillmore East on Second Avenue in Manhattan.

“I wanted Fillmore East to be the white man’s Apollo Theatre,” said Graham. “You got the stuff? You got something you want to say? Walk out on that stage and do it!”

Though it closed its doors after only three years in business, The Fillmore East showcased some of the biggest names in rock ‘n’ roll, including Led Zeppelin, The Who, Pink Floyd, and many more. There to document it all was the in-house photographer, Linda McCartney.

“Bill was one of the great mavericks who redefined what freedom really meant in the United States,” Pete Townshend said of Graham. “He drew us into his evolving world of rock show-business revolution, with the authority of a leading Boy Scout: bossy and generous at once.”

And that revolution was constant. There was almost no large-scale rock event that Graham didn’t have a hand in, and his name is attached to some of the most memorable music moments in history, including Woodstock, The Last Waltz concert, and Live-Aid in Philadelphia.

Graham, an expert at the technical aspects of producing a rock concert, knew the ins and outs of the business. It was Graham who warned The Rolling Stones to not play the Altamont Speedway Free Festival — he had told the band that the venue couldn’t handle the crowd — and he was right. He called it “the Pearl Harbor of rock” and for a few years after, the tension between Graham and The Stones was palpable.

Related: “Sympathy for the Drummer: Why Charlie Watts Matters”

But tensions eventually dissipated and Graham was still beloved by nearly everyone he worked with. A handwritten note from Donovan lovingly signed “thy humble minstrel,” hangs in the exhibit.

“Bill, you are, by far, the friendliest, most considerate promoter I have had the pleasure to work with. Together we have given direction to our audience and pleasure to each other.”

Graham continued his work into the 1980s, producing a variety of benefit concerts featuring more world-famous artists like Tina Turner, U2, Sting, Peter Gabriel, and countless more. But his 30-year career came to a screeching halt when he was killed in a helicopter crash on October 25, 1991. He was 60 years old.

Rock ‘n’ roll happens in the moment, so, as fans, we don’t typically give too much thought to the behind-the-scenes work. But it’s through the dedication of people like Bill Graham that our favorite bands play our favorite venues, gifting us memories that will last long after we’ve gone home for the night. Graham inevitably would have continued to produce star-studded concerts had his life not been cut short, but, as they say in the industry, the show must go on.

Bill Graham and the Rock & Roll Revolution will be on view at the New York Historical Society until August 23, 2020.

Photo of Bill Graham by Tony Morellia (via Wikimedia)