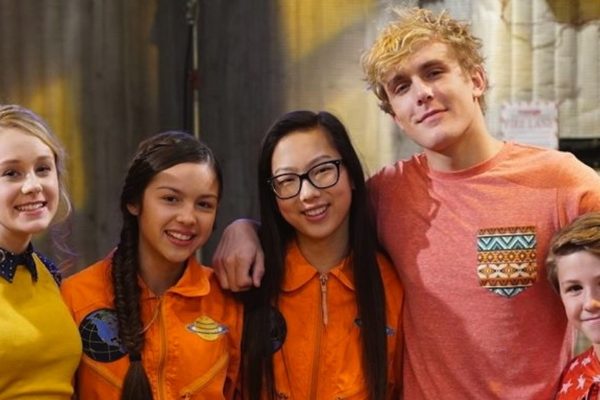 One of the challenges of parenting that nobody tells you about is having to sit through hours of horrendous, annoyingly dumb “kids’ shows.” The handful of cable channels catering to the pre-adolescent “tween” demographic have been producing popular, if grating, sitcoms for many years. But binge-watching these series would test the patience of even the most dedicated parent. Too many of them are rife with irritating and unsympathetic characters, hackneyed dialogue, implausible premises, and aesthetic sensory overload. So it was a pleasant surprise when my 9-year-old daughter introduced me to Disney Channel’s Bizaardvark; after a few episodes, I was hooked on the show’s silly charm and actually let out a few involuntary LOLs!

Bizaardvark follows the adventures of two best friends — Paige (Olivia Rodrigo) and Frankie (Madison Hu) — who have their own internet video channel on a YouTube-like entity called “Vuuugle.” Their modestly [amazon template=right aligned image&asin=B078TQJRRV]growing number of subscribers has earned them the privilege of making their videos at Vuuugle Headquarters, where most of the action takes place. Their friends are two fellow Vuuugle video-makers: Amelia (DeVore Ledridge), a makeup/beautification expert and Dirk (Jake Paul), a muscular dude who does crazy dares. (Note: Paul’s real-life antics on YouTube have led to legal troubles and a recent exit from Bizaardvark.) Then there’s Bernie Schotz (Ethan Wacker), their diminutive “agent” who lives with his grandmother. Vuuugle’s president is Liam, the pretentious son of the company’s founder; he appears as a talking head on a video flat screen mounted on a motorized robot.

Most of the storylines center around Paige and Frankie’s relationship as both video-makers and friends. There are many superficial — but completely plausible — premises involving schemes to gain more viewers, outdo competing fellow video-makers, etc. But there are genuine moments of tween angst and dramatic tension that are unexpectedly engaging. In one episode, Paige enrolls in a kickboxing class to be alone and have some “Paige Time” (separate from Frankie) so when Frankie finds out and enrolls, the two must confront some heavy emotions to resolve their dispute.

The friendship between Paige and Frankie is ultimately why I approve of Bizaardvark, both as a parent and an adult viewer. Regardless of the situation, the girls always resolve their differences with honesty and mutual respect. It’s refreshing to find a program for kids that models moral integrity, trust, and what it means to be a good and faithful friend, as well as accurately depicting today’s all-consuming world of technology and social media. The show also creatively tinkers with the sitcom format, as we see the girls in their clever videos and well-crafted song parodies reminiscent of Flight of the Conchords. Trust me: It’s genuinely entertaining.

Adults trapped in front of another Disney Channel sitcom with their kids will also enjoy Bizaardvark beyond simply approving of its moral compass. If you enjoy the surrealistic silliness of Bugs Bunny cartoons, The Three Stooges and some occasional harmless gross-out humor, you may find yourself laughing uproariously in spite of yourself and much to your child’s delight. [Many, many thanks to my own daughter Francesca Montagna for her assistance in researching this article!]

PS. Remember those school days?  These movies about school celebrate ’em!  And calling “Schoolhouse Rock:” we want you back!

0 comments on “Bizaardvark: Reconnect with Your Inner Tween”