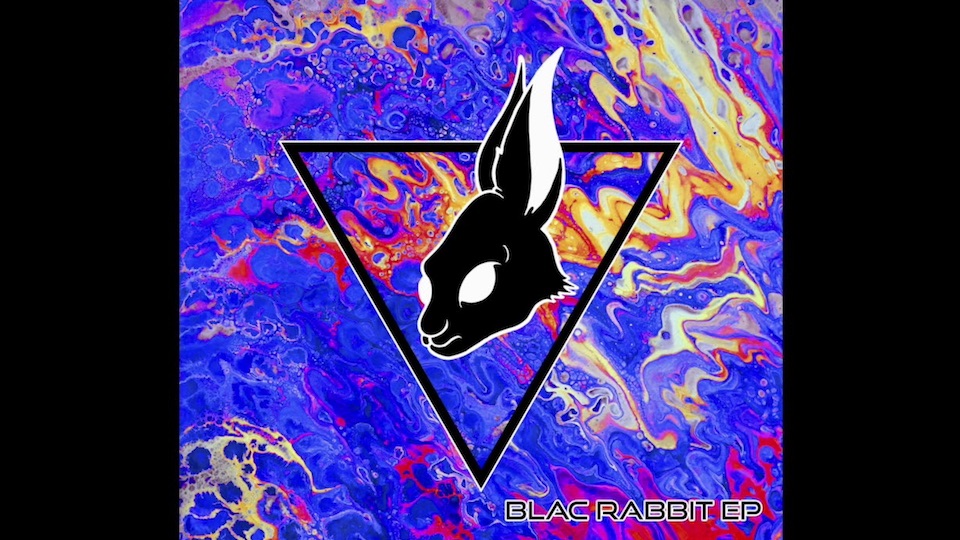 Give any hardcore Beatle fan a time machine and many would probably set sail for Hamburg in late 1960, when the unpolished, pre-fame Beatles were first honing their skills in clubs on the Reeperbahn. Among the strippers, speed, and booze, the Beatles were really rocking back then, as John Lennon told Jann Wenner in the 1971 Rolling Stone interview. “Our best work was never recorded,” he concludes. Classic Lennon, such a tease.

Of course, you can’t get back to Hamburg’s Bambi Kino, Liverpool’s Cavern Club, or any other moment on the 1960s Beatles timeline. Those days are gone forever, and some of them are even undocumented. You may not be able to find a time machine, but you can still step into a musical rabbit hole, one that’s happening today. This is no impossible thing, though it will give you that sought-after feeling of time slipping between past, present, and future as you encounter a Millennial vision of the Beatles, one perfectly suited for this century.

Blac Rabbit will take you down.

Related: “Everything Fab Four: A Cellarful of Noise”

Amiri and Rahiem Taylor, 24-year-old identical twins, replicate the Lennon-McCartney harmonies we know so well. Their versions add washy guitars evocative of Tame Impala (another big influence), along with jazzy, funky keyboard courtesy of Justin Jagbir and some unexpected, creative drum fills by Patrick Jones. Jones is, understandably, a fan of Ringo (who the band has met), but the 23-year-old drummer also digs Paul for his “charm.”

McCartney, ever hungry for lasting popularity, would surely appreciate this recognition by twentysomethings with more than 100K followers on Facebook and half that many on Instagram. If given the chance to tour with any classic rockers, Blac Rabbit immediately and unanimously said “Paul McCartney,” adamant in that selection, before getting a little wistful at the dreamy notion of opening for McCartney.

While Rahiem at times sounds a lot like McCartney in the Rooftop Concert, Amiri has that nasally quality of Lennon’s voice down. (One of their originals, played in the first set, is called “Rooftops.”) But, as the brothers told me, they are also able to switch back and forth between the Paul and John parts.

Their musical tastes are eclectic, extending well past the Beatles. Still, the Taylors say they each took much of their early songwriting inspiration from both Lennon and McCartney, as well as Harrison.

Amiri’s “All Good,” which opens their self-titled EP, was inspired by “It’s All Too Much.” You can hear the influence in the rhythmic feedback and the backbeat—even though the lyrics will remind you of “Getting Better,” with the line “I used to have a temper” recalling “I used to be cruel.” The meditative acceptance of “While My Guitar Gently Weeps” is present in the title, evoking Harrison, who sings of a floor that needs sweeping even though he’s clearly not the one who’ll be performing that mundane task. “All Good” adds a dash of McCartney-like optimism to a Harrison-esque song about transcending life’s concerns, such as a partner not coming home.

Blac Rabbit’s covers catapulted them to viral video fame in 2017. Songwriters and lead singers/guitarists Amiri and Rahiem got attention for busking Beatles hits in New York subways. The Fab Four’s early tunes “were easier to arrange when we were busking,” but Blac Rabbit is more into, as Amiri puts it, “the juicy part of [the Beatles’] career,” which for them begins with Revolver.

The rest of the band includes high school chums, drummer Jones, and keyboardist/bassist Jagbir.  Blac Rabbit’s initial core was the Taylor twins, who busked the subway and later appeared together on The Ellen DeGeneres Show in the spring of 2018. But the full band is cohesive as a group, responsive and interactive with each other onstage, especially during this current tour. Before that, Blac Rabbit traveled to England in December 2018, performing at the Beatles Story in Liverpool, and giving a spontaneous and well-received show in the Cavern Club on Matthew Street.

Speaking of Liverpool, the band members credit their ability to improvise onstage to their long friendship, a Beatles connection that won’t be lost on any fan of the Fabs.

“We used to jam in Justin’s basement for hours and hours, like, for years,” explains Rahiem. “We all hung out and just jammed on whatever. Not even necessarily playing songs, but just playing whatever came to mind.”

“It helped us sync up mentally,” Rahiem says, with the others nodding in agreement.

Quite a lot happened in their childhood homes since Blac Rabbit’s self-titled six-song EP was recorded in Patrick’s bedroom. And Amiri and Rahiem are not the only siblings on tour: Patrick’s younger stepbrother, Andell Jones, is to Blac Rabbit what Mal Evans was to the Beatles. Andell is the dependable and loveable roadie, driving the guys across the country, grocery shopping, and cooking up dishes like chicken pineapple fried rice while on tour.

Blac Rabbit is mastering what the Beatles themselves were so good at: taking something familiar and making it new enough to comfort and excite listeners at the same time. They also have the chemistry of friends that can’t be manufactured or faked, the ineffable spark that draws audiences of diverse ages, races, genders, and musical backgrounds to them. They express their gratitude for the opportunity to play their music and that of the Beatles, personally greeting concertgoers before and after the show.

But Blac Rabbit is definitely not another Beatles cover band. Their covers are more like remixes, while their originals—though clearly Beatles-inspired—are more in the mode of, say, Cheap Trick or Oasis, bands whose music is littered with lyrical allusions and musical lifts without being derivative.

A song like “Mindspace,” for example, borrows the bass line of “Rain,” according to Rahiem. But the advice-giving lyrics are a Millennial version of “She Loves You,” suggestions for how to have a relationship in an era of “trending topics.” The girl of this song is “sky high,” but she’s not an unattainable or idealized Lucy of the imagination; she’s a real girl to make love to and, more importantly, to talk to. Lyrics like these underscore the band’s Millennial attitudes about dating and relationships in the 21st Century.

What Blac Rabbit’s Beatles remixes also reveal is the legacy of black music in the Beatles (and other classic rock for that matter). The lead singers’ soundalike abilities tend to surprise people who identify as Beatles fans—even though those similarities shouldn’t shock anyone given rock’s black roots. After all, it was Little Richard who said of the Beatles, “I’ve never heard that sound from English musicians before. Honestly, if I hadn’t seen them with my own eyes I’d have thought they were a colored group from back home.”

Blac Rabbit’s new single, “Windy Cities,” drops May 10, the day the band will play Nashville. This show is in its final leg of their Interstella Tour, their third—and longest—North American tour, named for their debut full-length album, planned for Summer 2019 release. If you can’t make it to a live show, check out their self-titled EP and live performance on Audio Tree, available on major streaming sites. You can also follow the band on Facebook, Instagram, and Twitter.

For more on my interview with Blac Rabbit, see Blackbird Fly: Black America Remixes the Beatles (Penn State UP, forthcoming). In this book, I explore the racial and generational dynamics that inform Blac Rabbit, situating them alongside artists such as Prince, Sylvester, and Aretha Franklin. The project is supported by an award by the National Endowment for the Humanities.

0 comments on “Blac Rabbit: Turning on the Beatles Today”