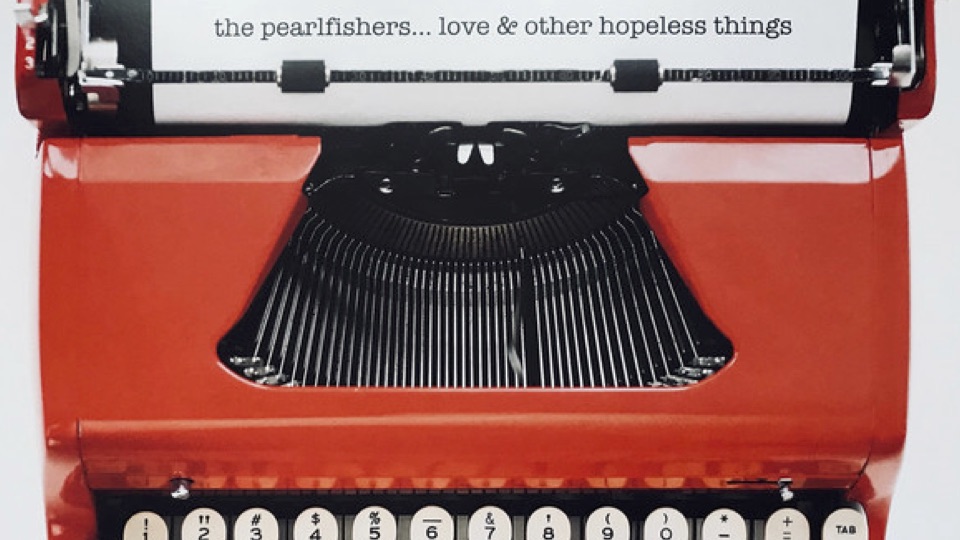 The Pearlfishers have been making exquisite pop records since the 1990s, earning them both a devoted fan-base and acclaim as “one of Scotland’s best-kept musical secrets.” Part of the same musical wave that spawned Teenage Fanclub and Kurt Cobain favorite BMX Bandits, their records are infused with the same mix of joy and melancholy that characterizes Brian Wilson’s best work. While the Pearlfishers’ leader David Scott demurred such a comparison when interviewed in March, the quality of his songwriting is matched by his eloquence when discussing music – that of others and his own – a body of work that encompasses the group’s new album, Love & Other Hopeless Things.

Many fans first encountered the Pearlfishers via Even On a Sunday Afternoon, the opening song on 1997’s The Strange Underworld of the Tall Poppies. The path to their first internationally distributed album began in 1986 with Scott’s earlier band Hearts & Minds. Despite an initial release on CBS flopping, the band gained a following, eventually changing their name to the Pearlfishers and releasing several recordings on their own label. Along the way, Scott continued developing as a songwriter. “I had enough money from a publishing deal to put together a fantastic home studio,” he recalled. “Through some difficult years, I was able to keep on writing and honing the craft of recording at a really good level. A lot of the songs on [The Strange Underworld of the Tall Poppies] resulted from years of studio experimentation in finding a ‘sound’.”

The next six years yielded a trio of albums – The Young Picnickers (1999), Across the Milky Way (2001) and Sky Meadows (2003) – each featuring compositions with lives beyond the albums themselves. Across the Milky Way’s closing track was one of three songs with origins in a stage production. “Is It Any Wonder originated from a little group of ideas that I developed as music for a theatre production of Archie Hind’s Playing For Keeps.“ Discussing how the intimate-yet-epic song took shape, Scott added, “At the end of Is It Any Wonder there are a series of these – short, similar but distinct themes stated one after the other. I like the intensity of that repetition and variation. The song itself describes a difficult period in my life and alongside the lyric, I think the arrangement, particularly that end section, tells you how I was feeling.”

Along with the infectious Pantohorse from that same stage production, Sky Meadows offered a pair of songs balancing personal and universal perspectives. Todd Is God evokes Todd Rundgren but also a broader feeling. “I suppose there’s a bit of a risk calling something Todd Is God particularly when said song has something in common with his harmonic style. I did the same thing in calling a song Womack & Womack. The point is that neither of those songs is directly about the specific artists but more generally about music itself and what music has meant to me. There’s a natural and understandable tendency to intellectualize the cultural impact of pop music but sometimes it’s just that moment of instinct when, as Brian Wilson says, you feel you can ‘trust’ a record.”

Closer to home, My Dad The Weatherfan was inspired by Scott’s father. “The lyrical theme of the song is just one of those family things that become a symbol of how amazing people are, in this case, a little joke that I used to have with my Dad who was always totally convinced about the veracity of the BBC weather reporting. He’d say, ‘they can tell you almost to the minute what the weather is going to be’. No argument would convince him otherwise. But of course, the song is meant to be much broader than that, more about faith, belief, trust and the ways people can inspire each other.”

Alternate versions of three songs from The Young Picknickers ultimately appeared on the Pearlfishers’ 2004 record A Sunflower at Christmas. “[The idea] came from Stefan Kassel at Marina Records. He called me to say he’d been daydreaming about a Pearlfishers Christmas record but sadly there would be no point doing it – ‘we don’t have time and we’d only lose money’. I knew he’d be back on the phone a couple of days later.” Though he didn’t start until August of 2004, Scott still finished the record in time for Christmas that year. “I was able to repurpose one or two things: an unused song called Love Plus Summer became Snow Plus Christmas and we already had a lovely alternate version of Blue December. Then I wrote a few new things, among them one of my all-time favourite Pearlfishers songs Winter Roads, and the one you mention, Snowboardin’. I just looked up loads of snowboarding terms which are pretty colourful in themselves and crafted the song from that.”

During this time, David Scott further developed his collaboration with Duglas T. Stewart and the acclaimed BMX Bandits, an experience reflected in one of his most evocative songs, The Umbrellas of Shibuya, from 2007’s Up With the Larks. “We were on tour in Japan with a kind of hybrid of BMX Bandits/The Pearlfishers and were headed off to Osaka from Shibuya Station in Tokyo. Coming up on the escalator you could see over the square outside the station and it was raining. All these plastic coloured umbrellas were going back and forth and it just looked incredible.”

After Up With the Larks, seven years passed until the next Pearlfishers album, Open Up Your Colouring Book. Scott readily described its impressionistic title track as “a heartfelt dedication to my niece and our days painting together” but was exceedingly modest about having the piece compared to Brian Wilson. “Musically I would never compare anything I did with someone like Brian Wilson. There’s a difference between him and every other musician on this planet as far as I’m concerned – a totally distinct expressionist and stylist. You can get down a rabbit hole talking about what would/could/should have been with Brian but I tend to remember my own experience listening to his music. Think of Pet Sounds as a peak and consider how many amazing records he made before then and that would be enough for ten lives. And then all this beautiful and surprising post-Pet Sounds music.”

That thoughtful approach held true when asked if anything about the recent Love & Other Hopeless Things might surprise devoted fans. “I’m probably the wrong one to ask. Honestly, I think I just do what I do and concentrate on the songwriting and I’m not sure I can see what would be surprising or otherwise at such a close distance.” Scott nevertheless noted that “One thing that might make longtime listeners smile is the closing track, Another Sunflower. I sometimes think about doing A Sunflower At Christmas 2 and always end up concluding that the original is best left alone, but this song kind of got started through thinking about that. It moves it on into the New Year though. The only resolution you need is to keep moving, keep working, breathe in and breathe out.”