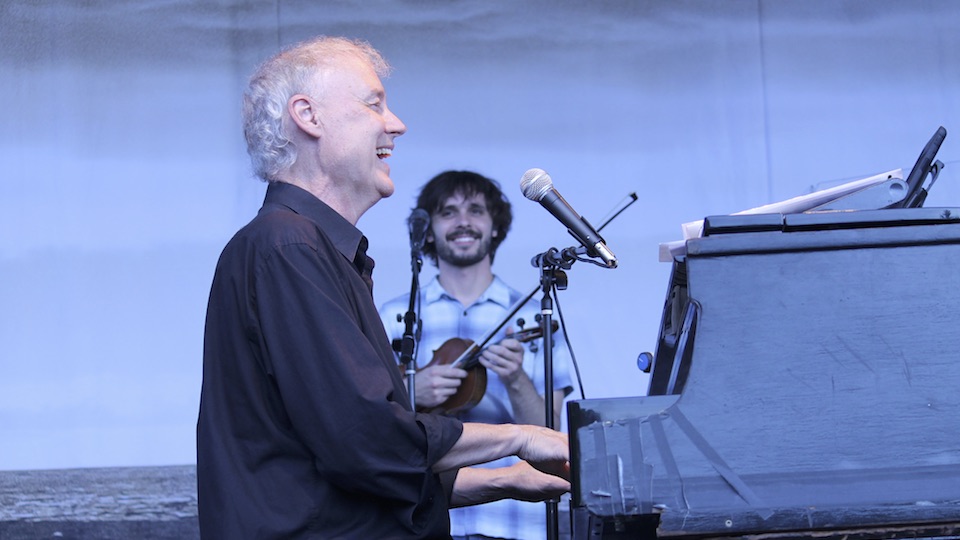 When it comes to human cultural endeavors, it’s been said there’s nothing new under the sun. Yet Bruce Hornsby and the Noisemakers’ latest album, Absolute Zero (released in April) — and the current tour supporting it — shows that there’s always something new and interesting to say.

The Noisemakers put on a great show June 26 at the Salvage Station in Asheville, NC—a live music lover’s paradise, in a region that’s born and bred generations of humans who spawned the rich tapestry of American folk music which inspires Hornsby and his band.

It’s generally a good sign when an audience contains people of all ages. This crowd included most everyone, from teens to folks in their 70s, sure testimony to the universal appeal of this multi-dimensional music. Listeners gobbled up the healthy diet of folk and jazz-inspired sounds and authentic originals the band served, with frequent sonic references to Jerry Garcia and the Grateful Dead, and band members grinning and obviously enjoying the gig.

Hornsby took requests for tunes going back decades (delivered on paper, including one sealed with a lipstick kiss) while engaging in slightly prickly banter with the audience. And yes, they did play “That’s Just The Way It Is”— Hornsby’s best-known song, and there’s no sign he’s tired of playing it—but there’s so much more.

Percussionist Sonny Emory has written that the spontaneous nature of the Noisemaker’s shows demands a lot from the band—not least because Hornsby’s setlists can include songs the band has not played for years.

Indeed, as a relative newcomer to the Noisemakers, fiddle and mandolin player Ross Holmes reported on Bruuuce.com that Hornsby sent him “a ton of tracks as well as a set list of about 80-90 tunes, a very daunting mound of material from a 30+ year career.

“I figured he was the type to avoid the constraint of a set list and just call tunes on the fly – I was right, which means I’ve spent a lot of time listening to and learning the songs!”

But this group is up to the challenge. And Hornsby is a natural bandleader—under his direction the band is tight, especially in producing the transitions and thrilling musical swells that remind this reviewer so much of the Grateful Dead in their best moments. The Noisemakers are most certainly not “noisy.” To the contrary, their sparkling improvisational passages–with players taking turns dueting with Hornsby on piano—are fantastic, especially with guitarist Gibb Droll, whose bell-like clarity channels Jerry Garcia so convincingly one has to double-check to be sure the late guitarist hasn’t been reincarnated right there on stage.

Droll has been with the band since 2013 and seems so at home—more than that, he really juices the sound of a musical outfit that reportedly takes the stage for each show with no set list — waiting for Hornsby to give musical cues for each number as he selects the evening’s songs on the fly.

But he’s clearly a humble guy—hanging out on the right side, in back, near Emory’s drum kit. Droll’s guitar doesn’t have the lead every moment—in fact, he left me wanting more. But I couldn’t lament when the band’s sound did such interesting shapeshifting, like when Hornsby picked up a mountain dulcimer—which he held on its side and strummed like a guitar–and later an accordion–gathering small ensembles around him to deliver classic folk tunes like “Little Sadie.”

The band’s sound fills out beautifully thanks to the work of John “J.T.” Thomas (keyboards) and JV Collier (bass). And Sam Amidon was a fitting solo warmup act. As Hornsby tweeted: “I’m so happy to have Sam playing with us…The spirit of Roscoe Holcomb and Dock Boggs lives in the music of Sam Amidon; he channels the old-time, nasty, stanky early twentieth-century music of the hills, but with unswerving modernism and adventurous consciousness that makes the music his own.”

The musical origins may be old, and the band definitely doesn’t rehearse every lick, but that’s the absolute organic charm of this group of top-notch musicians. Long live the American folk channel in the universal soundscape—with steady help from outfits like Bruce Hornsby and the Noisemakers.

Photo courtesy of the author