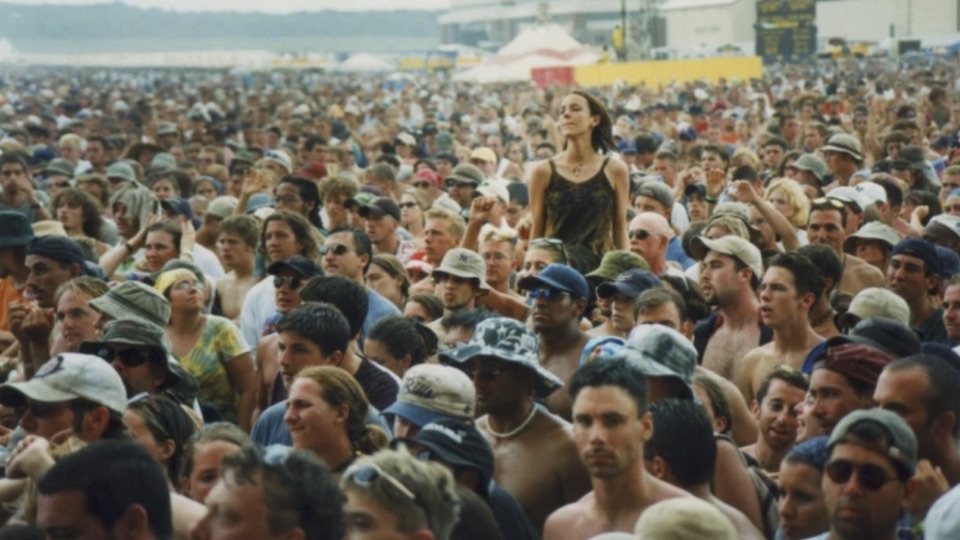 Receiving its premiere at this year’s BFI London Film Festival, MCR Non-Fiction’s feature documentary Burn It Down! focuses on the infamous Woodstock ‘99 music festival that has gone down in history as “the day the Nineties died.”

Directed by Tim Travers and Celia Aniskovich and made in partnership with Rolling Stone, Burn It Down! offers talking heads, archive material, and never-before-seen footage that goes beyond the headlines in order to capture the real stories of those who lived through the event. It’s an exploration, too, of the cultural shift and political context that punctuated the festival, and a dive into the toxic white masculinity that marked the era’s music.

Woodstock ‘99 was meant to celebrate the 30th anniversary of the original Woodstock festival. Taking place between July 23-25 1999 in Rome, New York, it was touted as a joyous occasion that would replicate the “peace, love, and happiness” of 1969.

Related: “Woodstock: What Are We Still Learning?”

Instead, a mixture of bad planning and a poor understanding of the zeitgeist saw the event descend into a lethal cauldron of violence, sexual assault and horrific carnage. As the film’s description in the BFI London Film Festival program states, “Woodstock ’99 makes Fyre Festival look like a walk in the park.”

With headlining musicians including Kid Rock, Korn, Limp Bizkit, Red Hot Chilli Peppers, Insane Clown Posse, Sheryl Crow, and Wyclef Jean among others, the organizers’ band choices mostly reflected the era’s prevalent nu-metal and pop-rock music. What they failed to recognize, however, was that their exorbitant ticket prices, costly food and drink stands, poor sanitation, and the July heat lit the fuel for a frustrated crowd. When combined with the angry-white-man music on stage, it created a dangerous cocktail of aggression. Crowd members trashed the grounds, cavorted in sewage, and set fires that looked like a scene from Lord of the Flies. The three days of mayhem resulted in three deaths, 1,200 admissions to onsite medical facilities, 44 arrests numerous accounts of sexual assault and four reported rapes.

The documentary delves into the cultural context of the time in an attempt to peel back the layers that led to this event’s demise. From a close look at the way ‘90s pop culture objectified women to an examination of the pre-millennial angst that plagued American youth, the directors call upon an impressive array of interviews with festival organizers, attendees, agitators, security staff, and artists to dissect where this ill-fated festival went wrong.

While the documentary begins as a comical portrait of a failed festival, the directors hone in on the more distressing aspects of the event, namely its failure to keep its women safe from harm. It would have been interesting to see interviews with more of the women who were at the festival themselves, but as the directors explained in their Q&A post-screening, no women came forward to share their experiences.

Despite the lack of first-hand accounts from female attendees, however, an interview with Bikini Kill’s Kathleen Hanna provides a female perspective on the music industry at the time and someone to speak on the sexism of mainstream rock. Hanna also harks back to when her husband Adam Horovitz, of the Beastie Boys, took to the stage at the 1999 MTV Music Awards and spoke out about the attacks at Woodstock, only to meet with a silenced crowd that felt more uncomfortable than roused to make women’s safety a priority in the live music scene.

The doc’s well-intentioned moments like this try to give women of Woodstock 99 some justice, but the lack of female voices in the film prevents this message from reaching its fullest potential. At least, unlike  HBO’s Woodstock 99: Peace, Love, and Rage that was criticized for its focus on the more “Girls Gone Wild” type footage of the festival, Burn It Down! doesn’t feel like an exercise in voyeurism. The women are not there to be ogled. They’re just not there at all. The music, too, feels more like a sideshow here, but we get just enough to get a whiff of ripe body odor and stale beer. What the film does succeed in, however, is laying the chaos bare in the hopes of learning from it. As they say, hindsight is good, foresight is better.

Overall, Burn It Down! is a riveting visual essay that stands as a grim cautionary tale of what can happen when event organizing goes wrong and the danger of leaving overlooked anger to fester. At once a walk down memory lane as well as look into how far we have – and have not – come when it comes to female representation in the music industry, this powerful documentary doesn’t serve to just create a spectacle out of the bacchanalian Woodstock ‘99. It urges us to see how things could have been done differently, putting to shame many of the chauvinist attitudes captured in the organizers’ interviews. The film’s final footage of the Capitol Riots of Jan. 6 provides a grim contemporary parallel to the festival’s unraveling, which, despite not offering much in the way of a happy ending, stands as a powerful testament to the old adage that “those who do not remember the past are condemned to repeat it.”

Photo: Screenshot from Burn It Down!

2 comments on ““Burn It Down!”: When Woodstock Went Dark”