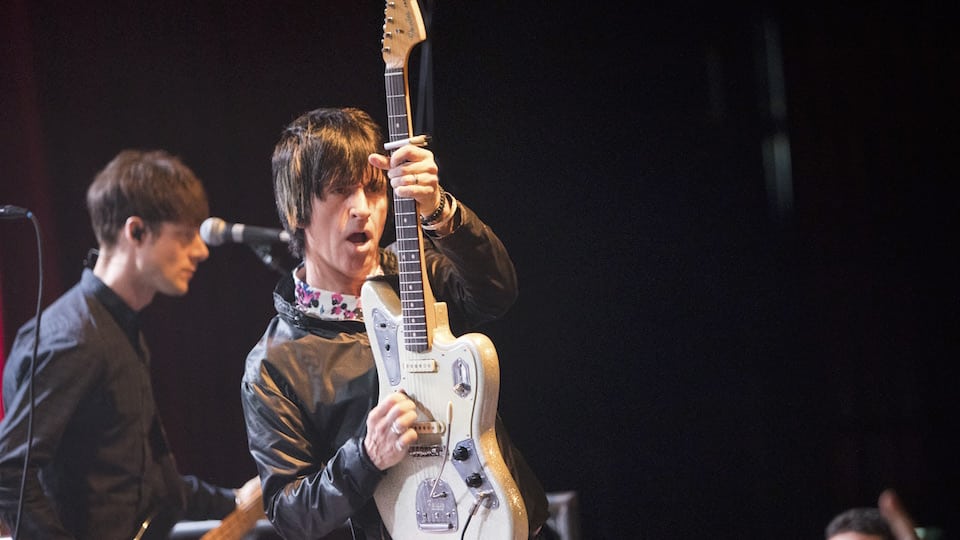 Five years with The Smiths ensured that Johnny Marr was one of the seminal British guitarists. Side contributions with The The, Modest Mouse, and The Cribs solidified his rep as more than a one-trick pony. That said, few expected him to take a turn as a solo singer-songwriter and fewer still, that such a turn would actually prove fruitful. After all, in his earlier bands, he’d left the vocal performances to the more accomplished Morrissey, Bernard Sumner, and Matt Johnson. Three albums into his solo career, Marr can now tick that particular box off his expanding musical list.

The Messenger was patchy, Playland had a “close, but no cigar quality” to it, but Call the Comet is a different beast entirely. It’s visceral, exciting, dynamic and fun — all qualities sorely lacking on Morrissey’s most recent effort Low in High School. But whereas Morrissey doesn’t benefit from Smiths comparisons, Marr does just fine. His lead single “Hi Hello” is held together by a charmingly Smiths-ian guitar hook amid a series of inspiring, flying cadences. Frankly, the song wouldn’t sound out of place on The Queen Is Dead. Furthermore, the album features many of Marr’s best songs since that time. Discussing the album with Rolling Stone, Johnny Marr explains that the seismic title isn’t overly conceptual, “but it’s got a unifying theme going through it about the Earth welcoming a different intelligence from the cosmos to save us from our own plight. The title Call the Comet is sort of a conscious plea for a new way.” As a greeting to extraterrestrials, we could do worse!

“Rise” starts the album with rocking effect, complete with John Lennon microphone reverb and showcases Marr as a surprisingly accomplished vocalist with shades of Marc Bolan and John Lydon in his delivery. “The Tracers” is more bass driven and chased by a torrent of tribal drums, almost Asiatic in sound. It’s the type of rocker that would fit seamlessly on a latter-day Oasis LP. Additionally, there’s psychedelia galore on offer here: “New Dominions” veers to new-techno with electronic drums continuing the tricks he learned with Bernard Sumner and Neil Tennant in the early ‘90s. “Walk into the Sea,” for its part, starts with some tasteful piano then unfolds pictures of yearning blue skies and wide white tides that illustrate the development of Marr’s lyrical voice.

True to his agitator roots, Marr finds inspiration in everything from the Brexit vote, the Bastille Day attack in Nice, and the election of Donald Trump. Recorded in his hometown of Manchester, this is a work that’s both personal and political. Disco rocker “My Eternal” warns of a world in a plague of desolation behind a chirping line of synths and Ringo style beats; “A Different Gun,” which echoes The Beatles’ “Happiness Is A Warm Gun,” is as aggressively anti-weaponry as Lennon’s masterpiece of 50 years ago. Even greater proof of Marr’s maturity as a lyricist can be heard in “Actor Attractor” with fascinating wordplay like “Life of fantasy / I know you can’t tonight / Script says if I don’t win / Split screen real life.”

Enough words. There’s much of Marr’s staggering guitar playing here for those who yearn to hear again how he blew our minds in his Mancunian four-piece of the ‘80s. “Spiral Cities” opens with the type of rhythm/lead interplay he popularized, while “Bug” delves into the achingly musical melancholia that many have attempted, but none have mastered more than Marr. Call the Comet is a cracking rock album that isn’t simply Marr’s best solo album. It’s one of the best recent releases by a skyrocketing mile.

Photo: Johnny Marr performs on stage during a concert at the Festsaal Kreuzberg on May 21, 2018, in Berlin, Germany. (Photo by Jana Legler/Redferns/Getty Images)