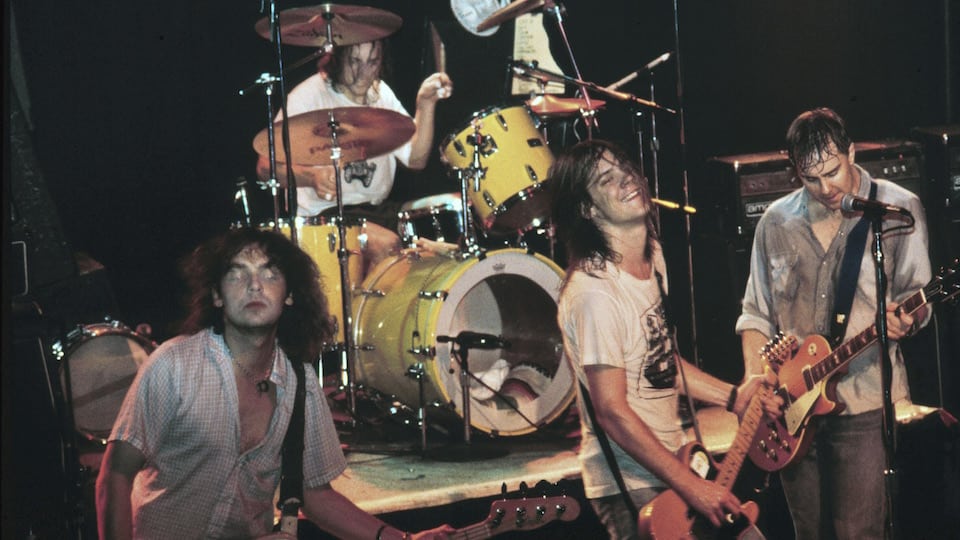 When we first got into it, I didn’t foresee this Soul Asylum reissue project becoming as extensive as it has… or that it would be such a boatload of work… or that it was going to be so much fun! The seed was planted in Jan. 2017 when I received an email from my longtime pal Ryan Smith. I’ve known Ryan for many years as the front man of the terrific long-running Minneapolis rock band The Melismatics. In recent years, he had also become lead guitarist for the current lineup of Soul Asylum. Ryan’s note informed me that the band had just hired new management who were interested in reissuing their Twin/Tone Records-era back catalog, which I instantly thought was a great idea.

As one of the co-founders of Twin/Tone, I had signed Soul Asylum to the label back in 1982, and was excited at the prospect of revisiting their early recordings. Ryan introduced me to the new manager, Joel Mark of the L.A.-based management firm Deckstar, and the project began moving forward, slowly at first. The pace picked up as I got to know Joel, and as my old friend (and Soul Asylum leader) Dave Pirner and I began discussing how to go about it.

It was quickly determined that Omnivore Recordings was the best home for the reissues. I’d worked with Omni’s fearless leader and reissue expert Cheryl Pawelski before and she was as excited about the prospect as I was. We rallied the Omni-troops and dove in headfirst.

The reissue campaign was to be built around Soul Asylum’s four primary Twin/Tone releases: the 9-song mini-album Say What You Will … Everything Can Happen (1984); their first full-length LP Made to Be Broken (1986); their second album While You Were Out (1986); and the 6-song EP Clam Dip and Other Delights (1988) — a sort of “Farewell to Twin/Tone” that followed the band’s signing to the major label A&M Records. These titles would be remastered with bonus music and memorabilia added to each in the grand tradition of the modern day reissue. The trick was to find enough extra “new” stuff that would knock the socks off old fans and help us gain new ones.

The vaults were opened, first at Twin/Tone, then at Dave’s house. It was clear from the git-go that Dave and I needed to be in the same room as much as possible to get the job done right. Which was challenging ‘cause, not only do I live in L.A. while Dave splits his time between New Orleans and Minneapolis but also ‘cause I’m a morning person and Dave is… not. The hours ended up being roughly 3pm to whenever. Sometimes the dinner break was taken around midnight. We dug deep for recorded, printed, photographed, hand-drawn/handwritten, and purloined treasures. We dusted off, unboxed, downloaded, sorted, listened, scrutinized, rejected, approved, agreed, disagreed, argued, laughed, agonized and even shouted a few “Eurekas!”

Throughout, Soul Asylum Road Manager Jeneen Anderson has been instrumental in keeping us connected as Dave and the band traveled hither and yon. The deep dig proved fruitful. We decided on a total of 36 excellent bonus tracks spread across the four titles and a fascinating collection of memorabilia for the packaging. The big “Eureka” moments included finding a flyer for the very first gig the band ever did, under their original name Loud Fast Rules (Nov. 7, 1981), as well as the first gig they did as Soul Asylum (Mar. 9, 1983). Needless to say, much high-fiving ensued!

A key element in any reissue is liner notes that bring a sense of history and context, and finding the right writer(s) is important. We kicked a lot of names around. Dave was particularly interested in reaching out to Robert Vodicka, a DJ-journalist who had interviewed the band in California in the early days. Robert had gotten out of the music business but we tracked him down in Chicago, where he works for a labor union. He was delighted to be asked and it was determined he would write about Say What You Will …. I was acquainted with the highly regarded Bay Area music writer Gina Arnold who had been a big fan of the Twin/Tone roster. We asked if she’d like to do the notes for Made to Be Broken. She said “Yes!” practically before I’d finished the question. Music journalist-author and friend Bob Mehr suggested Superchunk drummer Jon Wurster for While You Were Out who not only agreed but said that he was “honored to be considered.” Both Dave and I were interested in getting former Soul Asylum manager and Twin/Tone A&R man Dave Ayers involved. Dave A. jumped on board to handle the Clam Dip EP, saying it’d give him a “chance to write about Karl.” (Karl Mueller, Soul Asylum’s founding member, and bassist, had passed away from throat cancer in 2005.) We now had a real A-List of writers. Mission accomplished.

The four titles will be released in pairs. Say What You Will and Made to Be Broken will hit first on Jul. 20. While You Were Out and the Clam Dip & Other Delights EP (combined on one CD) will follow on Jan. 18, 2019. An expanded edition of Time’s Incinerator, the cassette-only, limited-edition compilation of rarities and unreleased tracks is in the works and will drop in the spring of next year. And that’s not all – vinyl versions of everything are being planned as well. Stay tuned for details.

For me personally, there’s a very real sense of recompense in reactivating these Soul Asylum records. Along with The Suburbs and The Replacements, this band really put Twin/Tone Records on the map in its formative years. Their work ethic was always quite astonishing to me. And the recordings they made in the early to mid-‘80s are oozing with fury and passion. I believe this work is ripe for reevaluation and am honored to help shine a fresh light on it.

One last thing I gotta say: I’ve been helping people make records for over 40 years now and working with the crew at Omnivore is as good as it gets. They’re insanely hard-working, talented music fanatics that I feel a true kinship to. Owner-partner Cheryl Pawelski is undoubtedly one of the finest archivists in the world — just ask Robbie Robertson or Jeff Tweedy! — while art director and partner Greg Allen makes it seem easy, even when sometimes it ain’t. They and the rest of the team at Omni are uncommonly good at what they do. I’m pleased as hell they are a part of this project.