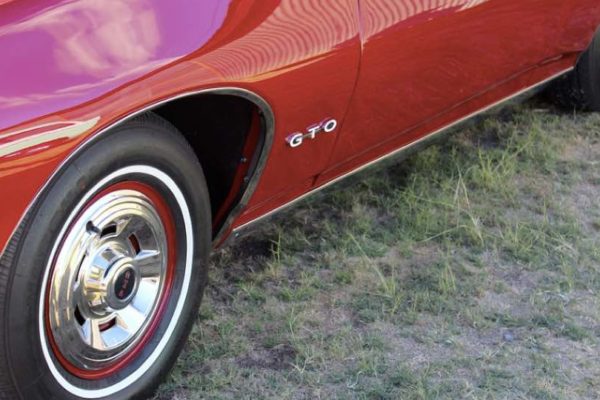 Cars have a long history of being anthropomorphized, glorified, even sexualized in rock n’ roll. Why is that? Is it the powering of the motor, the status of the model or the sensuality of the design? Whatever it is, car songs have been charting our love affair with four wheels for decades. It’s interesting to note that Cadillacs — often thought of as the car of The Establishment — are so well-represented in an art form so enamored of rebellion. Well, nobody said that Cadillac wasn’t stolen, borrowed or simply daddy’s car. Anyway, we’d rather be in a little red corvette.

This snappy tune is an uncomplicated paean to the 1932 Ford Coupe, viewed at the time as the ultimate vintage hot rod. This is pure early Beach Boys suffused with that California vibe and rich with laid-back harmonies. You can easily imagine it blasting out of a jukebox at a teen-filled malt shop in days of yore.

Another entry in the “auto”-erotica of mid-‘60s pop, this Nashville group’s big hit pays homage to a Pontiac muscle car. Not as well known as the Beach Boys car classic, “Little GTO” was nevertheless a gold record that remains a period perfect earworm that’s lost none of its cheery appeal over the years.

Although written (and recorded) by Mack Rice in 1965, Wilson Pickett is responsible for the rendition that made this song popular the following year. An R&B standard today, “Mustang Sally” has been covered by The Young Rascals, Sam & Dave and Hootie & the Blowfish, among many others. It was prominently showcased in the cult bar-band movie The Commitments. Frankly, who can deny the appeal of either the song’s sexual imagery or Pickett’s fabulous female back-up singers?

With all due respect to the original version by Jan and Dean, The Who’s bonus track update (from their album A Quick One sexes up the sly ode to a one-seater. There’s an adolescent bravado to Roger Daltrey’s vocals that make the teen narrator’s story of his passion for a car so amusing and relatable, while band-mate John Entwistle adds a brilliant twist with a surprising French Horn riff.

Is a car the ultimate symbol of crass consumerism? Janis Joplin seems to think so. Listen as the blues legend references the Benz, a Porsche, and a color TV as items mistakenly thought to buy happiness. A short a capella track on her final album, “Mercedes Benz” kicks off with raw energy then ends with an engagingly crooked giggle.

Now considered a new-wave/synth-pop landmark, this track from Numan’s The Pleasure Principle peaked at number 9 in the UK. A heavily electronic sound and a strikingly innovative video both emphasized the singer’s soulless comfort inside the shut-off world of his car. Strange but true, this song of isolation makes for stellar driving music.

This monster hit from the seminal 1999 LP, “Little Red Corvette” perfectly showcases Prince’s musical virtuosity and unbridled sexuality, as the Corvette in question represents either a rapacious woman or her not-so-private parts. Equal parts R&B, pop and funk, this transcendent piece of vintage Prince inspires spirited debates about its lyrics even today.

Yet another entry in the “cars as sexual metaphors” category, “Pink Cadillac” is a raw, gritty B-side to Springsteen’s “Dancing in the Dark.” A moderate hit for The Boss, the song actually received even greater airplay via Natalie Cole’s fantastic rendition circa 1988 when it cracked the top ten on the R&B charts. But we’re loyal to Classic Rock.

Talk about a novelty track! The Dead Milkmen, a quirky Philadelphia-based punk band, often infused their songs with stream-of-consciousness jokey chatter exemplified here as the singer obsesses over his Camaro in a hilarious fashion. Absurd? Yes. Memorable? Oh, hell yes.

This 1985 Grammy Award winner features The Queen of Soul singing about the glories of riding around in a Pink Cadillac. In the video (which veers from a black and white world to a pink Technicolor conclusion), Aretha belts out joyously as Detroit factories churn out cars and Clarence Clemons’ serves up brilliant saxophone. It doesn’t get much better than this.

0 comments on “Vroom, Vroom, Vroom… It’s All About The Driving Rhythm”