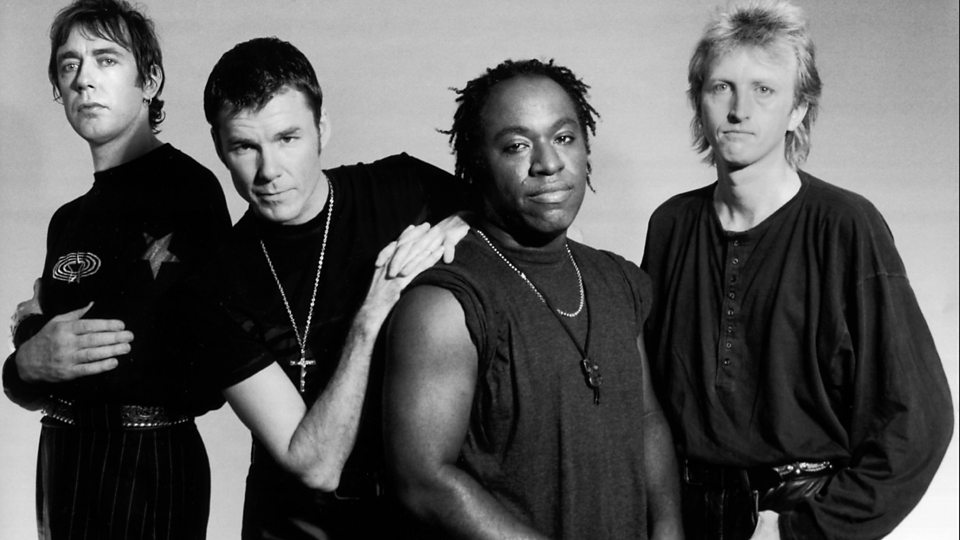 With their sparkling guitars, soaring choruses, and ballads of Highland ventures, Big Country was one of the greatest stadium rock acts of the eighties. Stuart Adamson, with his spiky hair and gallant, even heroic, vocals offered a dreamlike slant to an industry more romantic in story than scope. Following Adamson’s death, guitarist/custodian Bruce Watson has continued to bring texture to the ever-growing saga, completing The Journey with singer/songwriter Mike Peters in tow. Culture Sonar caught up with the guitarist to discuss the band’s history.

Featuring a tremendous guitar sound, Steeltown is a band watershed. Why does it hold such a special place in people’s hearts?

It was a sign of the times, I suppose. A lot was going on in the U.K. It was during The Strikes, Falklands, Thatcher f**** everything up, if you excuse my French. Stuart’s lyrics were much more black and white than they were on the first album. It was less poetic, more honest. It was like reading from the day’s paper! It was one of the first Digital albums, we recorded it on a Digital recorder. It’s very harsh sounding, almost punk rock, but I think it’s one of those albums I think could be remastered with today’s technology. But it’s like an old photo; you don’t want to tamper too much with old photos!

U2/XTC producer Steve Lillywhite worked on the album. What was he like?

Steve’s just great. He was great fun to work with, we worked with him on the first album too. We recorded Steeltown in Stockholm, over at ABBA’s studio [chuckles]. Steve wanted a year off, he was making a lot of money from U2, Pretenders, Simple Minds[ chuckles again]. So, we were in Stockholm and, yeah, Steve’s great to work with. Very enthusiastic. Any idea you’d bring to him, he’d go with. We used to go see the U2 guys with Steve, so we had a lot of good times with him.

“When The Rose Is Sown” was a monster hit in Ireland. Do you think that was because of the Celtic Rock connection?

Well, “Look Away” went to number one in Ireland, and that was much more of a pop-rock song. Big Country always wanted to have big sounding choruses. The Celtic thing was one of our elements in the early days, and maybe that had something to do with it. But the band had many different types of sounds.

On the subject of Ireland, what was it like playing with Geldof and Live Aid?

We didn’t actually play Live Aid. We attended Live Aid, we appeared on stage for the finale, but we didn’t perform a set. We sent a recording to the Live Aid guys for [“Do They Know It’s Christmas?”]. It was all very last minute, we were playing a gig in Germany, so we just recorded a message in the changing rooms and sent it to them.

Restless Natives is one of the tentpoles of Eighties Scottish cinema. Talk to us about that.

That came entirely out of the blue. It’s funny, later on today, I will have an interview about the film. It’s being released on Blu-Ray. It’s a kind of funny, almost feel-good movie. There was only so much they could do with the budget, but it’s almost a Bill Forsyth, Gregory’s Girl, kind of movie. The director had used some songs from our first two albums, which we didn’t know about. So, because of that, we had to write some soundalike songs in parts, which I wasn’t too keen on. But I did enjoy writing a lot of the incidental, instrumental music for the film. And the “Restless Natives” song has become a bit of a fan favorite, so we play it a lot these days. Often, if there’s an encore, we perform that one.

Related: “The Replacements: Losers Who Won”

“Wonderland,” perhaps the greatest Big Country song committed to tape, is awash with sparkling guitars. What was your contribution to that song?

I came up with the original music for “Wonderland.” I put it down with Mark Brzezicki, the drummer. We put it towards the record label and said, “we’ve got to do it now.” We recorded it with an engineer called John Brand. It was between The Crossing and Steeltown, so the label wanted a single. We presented it to Stuart, who then went away and wrote the lyrics. Because of that, I changed some of the guitar lines. We were a very melodic band, melodies were very important to us. “Wonderland” was released as a mini-album in America and Canada, but it was a single in the U.K.

That’s from something my son Jamie and I wrote together. Mike Peters had joined the band by then. We handed him our library of tapes, and he said he had a lyric for that one. It was suggested we do the track with Steve. ‘But Steve’s really busy!’ ‘You don’t ask, you don’t get. We’ll check on Facebook or something.” Steve was over, doing some work for U2, and he said we’d rattle it through in no more than half a day. We recorded it in RAK Studios, just like we did at the beginning with Steve.

Delegating guitar duties, how is it different between Stuart Adamson and Jamie Watson?

It was different with Stuart because he was singing and playing guitar. The stuff, though simple enough, did have weird time changes and intricate arrangements. Stuart wasn’t always comfortable playing a rhythm part that didn’t align with his vocal. Now, Simon-who sings with us- plays acoustic, so there’s more for us to do on electric. On some songs, I’m playing Stuart’s stuff and Jamie’s playing mine. On others, I’m playing my stuff and Jamie’s playing Stuart’s.

I’d like to ask about the genuinely affecting piano ballad “Ships”. Was that influenced by The Eagles?

Definitely not! No, that’s another one of mine. But because it’s in G, and everything in G sounds country-esque… but it definitely wasn’t The Eagles! The vocals are great, classic vocals from Stuart. We did with piano and a string quartet for No Place Like Home but then did with full band arrangement for The Buffalo Skinners. It’s that twangy guitar that gives it a country sound.

These days, you play with The Skids [Stuart Adamson’s other band]; what’s that like?

Just fantastic! Again, that’s about honoring Stuart. It came up to the 30th anniversary, and Richard Jobson asked if I’d like to help with a gig. Normally, when Big Country or The Skids play, we play Dunfermline. We thought we should play a couple of gigs around the 30th anniversary, so we also did a slot at T in the Park. Then it got to a point where Richard said he’d like to do some writing again, so that led to Burning Cities. There’s another offshoot from that where it’s Jamie, Richard, and I doing an acoustic thing. He does some of his songs, I do some of mine and Richard tells stories. Sometimes these go on for two hours! Jamie and I have also recorded with Thomas Kercheval. We kind of did this isolation thing last year, because he’s in America and Jamie and I are in Scotland. I like to feel like we’re all in the same shared space, but a lot of artists file stuff over the internet these days. We called the album Men of Steel and ourselves WKW.

At the moment, there are no plans. That’s kind of out of respect to Stuart’s family. We’ve got a large back catalog and fans like to hear much of what we haven’t played in a long time. We’re all songwriters ourselves in Big Country, but we have no plans to write another Big Country album.

2 comments on “Catching Up with Big Country’s Bruce Watson”