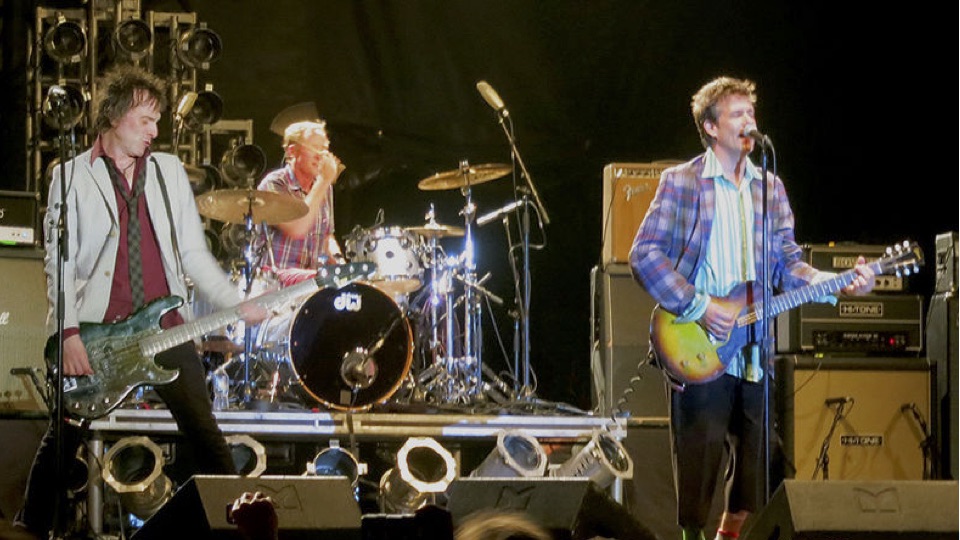 Underappreciated, underachieving, self-deprecating, self-destructive. These words all constitute apt descriptions of The Replacements. Formed in 1979, the Minneapolis-based band staggered through the 1980s, leaving behind them a wake of mayhem, carnage, and outrage, but also a number of wonderfully inventive and impassioned songs. By the time they called time on their career in 1991, the Replacements had recorded seven remarkable albums which have stood the test of time. Tracks from these recordings trace their evolution from snarling punks to thoughtful if always irreverent alternative rockers.

Their 1981 debut album Sorry Ma, Forgot to Take Out the Trash was accurately classified as punk. Bob Stinson’s searing lead guitar dominated their early sound, augmented nicely by his younger brother Tommy’s thumping bass lines. Chris Mars kept time on the drums, while songwriter Paul Westerberg’s rough vocals lent appropriate venom to songs like “Taking a Ride,” “I Hate Music,” and “Shiftless When Idle,” whose narrator boasts that he has neither idols nor taste.

Released two years later, the ironically titled Hootenanny plows much the same furrow as its predecessor, but Westerberg’s “Within Your Reach” represents the beginning of a more nuanced sound. While Let It Be (1984) includes raucous tunes like “We’re Coming Out” and “Gary’s Got a Boner,” it also features the tuneful “I Will Dare” and “Unsatisfied,” Westerberg’s impassioned declaration of youthful discontent. “Here Comes a Regular,” the best track on 1985’s Tim, finds the band exploring a mellower groove and reveals Westerberg as a composer and singer capable of expressing not just anger but compassion. “Skyway” (Pleased to Meet Me) is similarly touching and when combined with standout tracks like “Can’t Hardly Wait” and “Alex Chilton,” the band’s homage to the leader of The Box Tops and Big Star, finds the band at the height of their considerable powers.

Any discussion of the Replacements (nicknamed The ‘Mats) would not be complete without mention of their keen sense of humor. “Tommy Gets His Tonsils Out,” for example, goofs on Stinson’s upcoming surgery with lines like “Strap him down, we’re out of gas / Stop your bawling, ya little brat.” “Mr. Whirly,” a comic homage to the Beatles, includes the introductory chords of “Strawberry Fields Forever” and nonsensical lyrics set to the melody of “Oh! Darling.” Always eager to amuse themselves, the playful bunch even recorded a cover of the Disney song “Cruella De Vil.” The title of “Beer for Breakfast” speaks for itself, and “All He Wants to Do is Fish” is an affectionate and amusing dig at guitarist Stinson’s remarkable lack of ambition.

If “Treatment Bound” (Hootenanny) is another demonstration of the band’s humor, it also illustrates that in the end they were the butt of their own joke. “We’re getting nowhere fast,” Westerberg admits to the strum of his acoustic guitar, adding later that while their label wants a hit, they don’t give a sh*t. Lacking the kind of leadership, discipline, and direction that manager Brian Epstein gave the Beatles, The Replacements never realized their commercial potential. Masters at alienating record labels and even their own fans, the band only realized the cost of their antics after the damage was already done. Tensions in the group led to their firing Bob Stinson and replacing him with guitarist Slim Dunlap in 1987, but the line-up change did little to forestall their swiftly approaching disintegration.

If he played a clown able to shrug off his band’s lack of commercial success, Westerberg envied the success not only of more-polished contemporaries like R.E.M., but especially grunge acts like Nirvana who accomplished what the Replacements were never able to: namely, maintain their artistic integrity, sneer in the face of the record-buying public, yet also somehow attain success and recognition. Even once they managed to land a contract with Warner Bros. subsidiary Sire Records after recording their first three albums on minor hometown label Twin/Tone, neither Pleased to Meet Me, Don’t Tell a Soul, nor their finale, All Shook Down, rose past #57 in the charts.

Westerberg established himself as a solo act in the early 1990s, while Tommy Stinson recorded a number of albums before becoming the bassist for Guns N’ Roses in 1998. Drummer Mars abandoned music to become an artist. Having lost his power struggle with Westerberg, mild-mannered Bob Stinson played guitar for a few minor Minneapolis bands before succumbing to drug and alcohol addiction and dying in 1995. Stinson’s story is recounted in great detail by Bob Mehr in his excellent 2016 account of the Replacements, Trouble Boys. Two earlier works recount the band’s rock and roll misadventures. An oral history, The Replacements: All Over But the Shouting was published in 2009, and The Replacements: Waxed-Up Hairs and Painted Shoes (2013) tells their story in photos.

The Replacements were nominated for inclusion in the Rock and Roll Hall of Fame in 2014 but were not inducted. Despite their foibles and inability to connect with the record-buying public, however, the band must be considered a success. Most music critics lauded them. Robert Christgau, for example, deemed them “lovable” and gave their EP Stink a grade of A+. In the end, perhaps the ‘Mats career can be summarized by the fact that they unknowingly answered the question posed by Allen Toussaint in his composition “What is Success?” In that song, covered by Bonnie Raitt and others, the narrator muses whether success is achieved by “doing your own thing” or merely “joining the rest.” The Replacements scorned to join the rest and though their decision to do their own thing ultimately cost them the fame they secretly craved, one suspects it left them far from unsatisfied.

Photo of the Replacements, 2013 via Wikimedia Commons