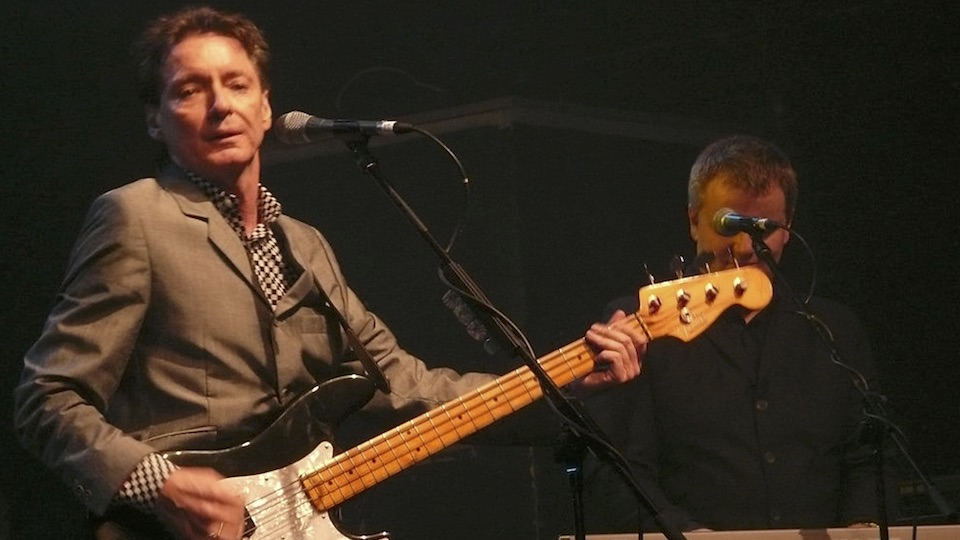 Featuring a tremendous bass sound, The Jam’s Sound Affects stands as one of post punk’s most memorable efforts. The sequel band From The Jam are set to tour with the album. Subject to government advice at the time, the Sound Affects 40th Anniversary tour will start in Autumn 2020 and run through until early 2021. Bassist Bruce Foxton has played for both bands, and enjoyed a fifteen-year spell with Ulster unit Stiff Little Fingers between The Jam/From The Jam tours. Eoghan Lyng caught up with the songwriting bassist.

Like McCartney, you’re a guitarist turned bassist. Why did you gravitate to the four-string?

Ooh, that goes back to the early days. That was when Steve Brookes was in the band. Paul Weller was on bass, Steve was on rhythm and lead guitar and when I joined, I joined on second rhythm. Steve got a bit fed up and left the band. We auditioned for a lead guitarist. But, we just didn’t find one, even though we looked for one. We didn’t think we’d get on with “him” or “he doesn’t have the musical capabilities.” So, Paul suggested we become a three-piece. He said he’d play guitar and asked if I’d play bass. He handed me his violin shaped bass. And the rest is history, as they say.

Was McCartney an influence on your wonderful bass playing?

It’s very nice of you to say it’s wonderful. Yeah, I guess McCartney. John Entwhistle is another. I really like melodic bass lines, so I guess subconsciously they’re an influence.

How did you come across vocalist Russell Hastings?

He was a whippersnapper in 1982, though we were all very young back then. He was actually at the last Jam show, and now here he is – all these years later – fronting From The Jam! It started in 2006. I was in a band with Simon Townshend, Pete’s brother, and Mark Brzezicki. Mark was the drummer from Big Country. We were called Casbah Club and we were set to play at Guildford University one night. As it happened, we were on the same bill as Rick Buckler’s band The Gift. Dave Mason was the bass player in that band and Russell was in that group. I met the guys before we played and they said “why don’t you come on for a couple of songs?”. I took over from Dave and I think we played “Tube Station”. So, for a lot of 2006, I would appear on stage to play four songs with The Gift. It was the first time Rick and I shared a stage for .. I don’t know…twenty eight years? It all snowballed from there. We had a meeting, me and The Gift, and we said it’s going so well, we should do something more. We didn’t want to call it The Jam, as Paul wasn’t involved. We called it From The Jam because I was from The Jam and Rick was from The Jam.

Yes. Russell and I were sent a text from him saying, “with regret, I am leaving.” I haven’t really heard from him since; I tried going down the Christmas cards route. It’s a drag, really. If he thought I was a wanker, or Russell was, he should have just told us. Life is too short. I’m good friends with Paul again because we realize this. It took the passing of my wife and Paul’s dad [The Jam manager John Weller] for us to bang our heads together. I mean, there was that exhibition in Somerset a few years ago. It would have been nice for the fans for us to be photographed together. Paul and I showed up, but Rick didn’t. He had a prior engagement.

What’s From The Jam drummer Mike Randon like to lock into?

He’s a fantastic drummer. I’m not really answering your question, but he is. He teaches drumming for a living. We were very lucky with him. It’s not like what I said earlier, when we couldn’t find a lead guitarist, Paul played guitar and I played bass. It’s not like that when you’re looking for a drummer. We really struck gold with him. Much more than that, he’s a really great guy. We knew he was the one from the get-go.

Do you think people are more accepting of Russell Hastings now than they were at the beginning?

Oh yeah! We’ve been doing this a long time. We started in 2007, it’s 2020 now. If he had to prove himself, he’s more than done that. Not that it’s easy to rehearse right now, what with all this social distancing.

Sound Affects is considered The Jam’s watershed album and certainly my favorite. Why is it so widely celebrated?

Thank you. I think all the albums are celebrated. You hear the songs on the radio all the time, they still sound exciting and contemporary. I think it’s a credit to the writing and to the musicianship. “Town Called Malice” is used a lot in films. You hear it played in films.

One of the best The Jam songs is the impossibly charming “Smithers-Jones.” What’s it about?

Quite simple, really. It’s about working and bending over backward for your boss. Then, he doesn’t offer you the same support. You work all the time, and suddenly you’re of no more use. It’s like what happened to my dad. All your life working, for what?

What were your first contributions to The Jam?

Ooh, I don’t know. They must have been “London Traffic” and “Don’t Tell Them You’re Sane”. “News Of The World” came later. I think you’re right, “Smithers-Jones” was my finest composition for the band. We re-recorded it for strings. It first appeared on the B-side to.. what was it called… “When You’re Young.” Then, it was to appear on the Setting Sons album. We didn’t record with click-tracks in those days, so the song slightly speeds up towards the end. It was interesting watching these guys play along to it, but they got it right in the end. I believe our producer, Vic Coppersmith-Heaven, did the arrangement. We recorded the strings in AIR Studios, just on Oxford Street.

Didn’t you perform “Smithers-Jones” with one of Ireland’s finest bands, Stiff Little Fingers?

Yeah, I did. I was with them for fifteen years. They’re still very popular, Jake Burns is a great songwriter, so I get what you’re saying. We had some great times together. Great guys. We play the song with From The Jam too, we do a full band version of it. Andy Fairclough is our Hammond and mellotron guy. When we play “Smithers-Jones”, he plays a lot of mellotrons along to it. I sing and play bass, while Russell plays guitar.

Paul Weller played on your album, Back In The Room. Might there be another musical collaboration?

You never know. I think there is enough material for Russ and I to release another album. When we recorded with Paul, it was all casual. He just popped round to the studio, and I asked if he wanted to play? He just gave it there and then. If he happens to be in the studio, it would be nice to have him on. Same for his stuff. If he ever asks me to play on any of his songs, I’ll jump at the chance!

From The Jam are set to tour with The Selecter. Are there any dates planned?

I’m kind of tearing my hair out over this one, same as most people in the country. We are hoping to tour the U.K., but it’s hard to say when. They’ve got “Task Forces” coming in, moving in to see when things can open. There are announcements on the evening news. It will happen, but when? Hopefully, it will be this year and when we do, The Selecter will be our guests.

0 comments on “Catching Up with Bruce Foxton of The Jam”