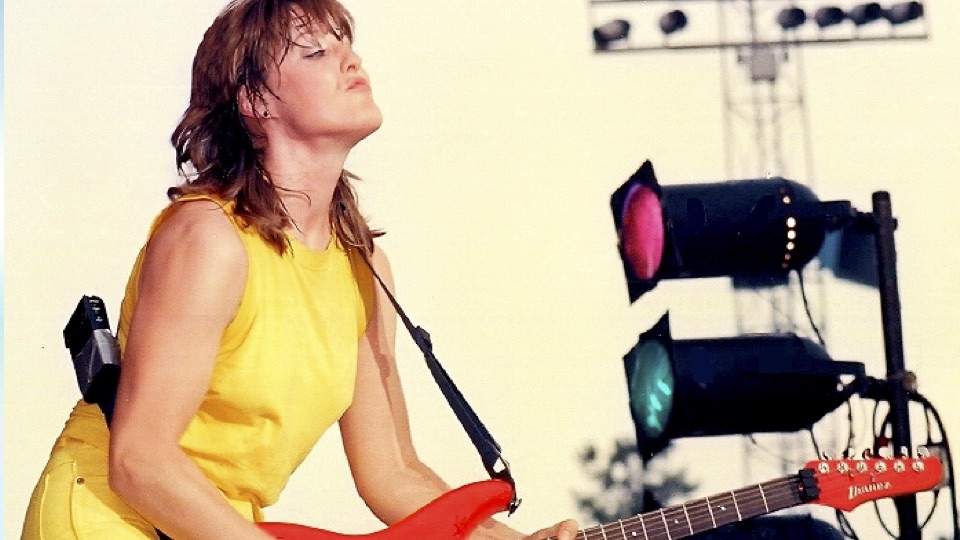 If you’re looking for a song that defines good cheer and positive vibes, “Walking On Sunshine” is a prime candidate. The ecstatic tune was the biggest hit for Katrina and the Waves, a band that had their greatest success in that faraway era of the 1980s. The group grew out of a cover band called Mama’s Cookin’ which featured Katrina Leskanich on keyboards and vocals, Vince de la Cruz on guitar, Bob Jakins on bass, and Alex Cooper on drums. They had been playing gigs across the UK, gaining a solid reputation as a live band. Songwriter-guitarist Kimberley Rew, a former member of the neo-psychedelic band The Soft Boys, later joined the group, and they re-christened themselves The Waves, which was the name of a band Rew and Cooper had been part of in the 1970s. Rew initially alternated on vocal duties with Leskanich, though she later became the group’s lead singer. Jakins eventually left the band, and de la Cruz took over on bass. This became the classic lineup of Katrina and the Waves, as the band finally came to be known.

After issuing a few singles and an EP, the four-piece outfit recorded an album’s worth of original material, hoping to sell the resulting disc at their live shows. The album, Walking on Sunshine, was initially released on a Canadian label, Attic Records, as was the group’s follow-up record, Katrina and the Waves 2. The band toured extensively in the UK, building up a loyal fan base. One of their songs, the Rew-penned “Going Down To Liverpool” achieved some visibility and success via a cover version recorded by The Bangles. Capitol Records took notice and signed the group in 1985, and the band re-recorded some of their earlier material for their self-titled US debut. Most of the songs on the album, actually the band’s third LP, including “Walking on Sunshine,” were substantially re-worked from their original versions. When “Walking on Sunshine” was released as a single, the band struck gold.

The song was a smash hit, rising all the way to number 9 on the US charts. You could hardly turn on a radio or tune into MTV at the time without hearing Leskanich belt out the radiant tune.  A second single from the album, “Do You Want Crying,” managed to reach number 37. Waves, the band’s 1986 follow-up, didn’t quite hit the heights of their stateside debut, but their 1989 LP Break of Hearts, managed to crack the top 20 with the song “That’s The Way,” co-written by Leskanich and Rew. Capitol later dropped the group from their label, though they continued to record throughout the 1990s. The band had a brief resurgence of popularity in 1997. They won the Eurovision song contest while representing the UK with the song “Love Shine A Light,” which became a sizable hit across the pond, reaching number three on the British charts. Despite the success of that single, friction within the band culminated in Katrina Leskanich exiting the group in 1998. The band soldiered on for a bit, but they officially dissolved not long after her exit.

“Walking on Sunshine” continues to shine on, and has become a pop/rock playlist mainstay. The song has been showcased in films, TV shows, and commercials, including The Secret of My Success, Futurama, and The Big Bang Theory. The song was also used for the title of a 2014 British film that featured cover versions of 1980s pop hits. Katrina embarked on a solo career, and Kimberley Rew has continued to write, record and produce new music. In the pantheon of “feel good” songs, “Walking On Sunshine” shows no signs of fading into the distance.

2 comments on “The One-Hit Wonder File: “Walking On Sunshine””