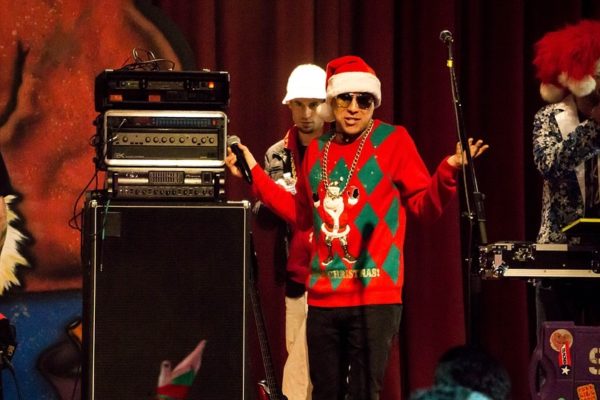 The only truism about Christmas music is that even the most beloved song can wear thin if it becomes too ubiquitous. As a public service, CultureSonar is happy to offer a selection of seasonal songs to liven up your playlist. Many are by familiar artists, though, not necessarily ones you might associate with holiday cheer. As a general matter, the songs here are very true to the style of the artists, so if you enjoy their work, these songs are also likely to catch your ear.

The Scottish cult-favorite has been making exquisite pop songs since the early 90s. If you ever wondered what Todd Rundgren and Brian Wilson collaborating on a Christmas song might sound like, “Snowboardin'” from their 2005 release A Sunflower at Christmas will give you a pretty good idea.

Even if you’re not especially religious, it’s hard not to be moved by Smokey Robinson’s performance of Stevie Wonder and Syretta Wright’s song retelling the nativity story. While some of Motown’s Christmas releases can feel a bit lightweight, Robinson’s conviction is undeniable here.

3. The Emotions’ “What Do the Lonely Do at Christmas?”

Though generally remembered for their disco-era hits, this soulful essay in seasonal heartbreak is timeless.

Better known as a producer (and/or Sam Phillips’ ex-husband), Burnett has been performing his own songs since the 1970s. His rendition of this carol is slower paced than most and all the better for it.

5. The Band’s “Christmas Must Be Tonight”

Robbie Robertson has always excelled at writing in character. Here he offers a shepherd’s perspective on the birth of Jesus, punctuated by a marvelous refrain.

Son of a carpenter; Mary carried the light.
This must be Christmas; must be tonight.

Numerous artists have recorded the song, but The Band’s own stripped-down performance, released as a bonus track on the reissue of Northern Lights – Southern Cross, is arguably the best.

Isaak has always had a gift for depicting states of loneliness, and this deceptively easygoing song is no exception.

Oh, the lights across the street
They look so warm, they look so sweet
Like the love you gave to me
Just yesterday.

There’s often been a bit of tension between the spiritual and the earthly in Al Green’s work. His take on this Christmas classic splits the difference as well as anything in his body of work.

One of only two originals on her Christmas album One More Drifter in the Snow, “Calling On Mary” is one of her best songs in any setting. The religious overtones mesh perfectly with drifters and a sidewalk Santa, perfectly capturing the mix of melancholy and hope that characterize the season for many.

She offered sight to the blind,
But I’m not the miracle kind.

Wilson’s album What I Really Want for Christmas is a bit uneven, but this song is an absolute gem. If you love The Beach Boys but are worried you might do harm to someone if you hear “Little Saint Nick” one more time, “On Christmas Day” is the answer you’ve been searching for.

The guitar-heavy take on the traditional carol is in its own way a quintessential Weezer song. Rivers Cuomo has always worn his heart on his sleeve, and that’s clearly the case at Christmas time as well.

Best known for lounge-style performances of pop songs, Richard Cheese comes up with a hilarious original. Anyone who’s been to Vegas will appreciate lyrics like…

The Strip lights are all twinkling
There’s no room at the inn
But because ’tis the season
We’ll comp a suite for Mary at the Wynn.

12. Rosie Thomas’ “Why Can’t It Be Christmas Time All Year?”

Despite the seasonally-specific title, this infectious song can stay in your iPod all year long — proving the song’s point in the process.

Is there an off-the-beaten-path holiday favorite we’ve overlooked? Feel free to let us know in the comments section or on our Facebook page.