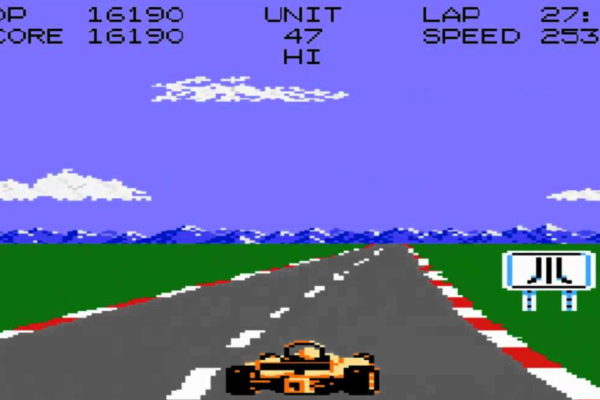 The racing genre of video games has been incredibly popular since Atari’s glory days in the ’80s. And while there was nothing back then to rival the open world of Forza Horizon or the intricate simulators of Gran Turismo today, the old school games were nevertheless visually rich experiences that packed more than just thrills into the play. And while the vehicular complexity of new titles often permit massively high levels of customization unimagined years ago, let’s not undervalue the inventiveness and fun factor of these eight retro that paved the way. Where would we be without a joystick?

1982: Pole Position (Arcade/Atari)
As 1983’s highest grossing arcade experience, Pole Position inspired many subsequent titles for which checkpoints, qualifying laps, and the use of real life racetracks were basically a given. To its credit, Pole Position introduced all three of these concepts to the genre. Originally created by Namco then put out by Atari, Pole Position was so popular that it even inspired a cartoon series. Without a doubt, modern racing games would not exist without Pole Position.

1985: Hang On (Sega)
Nowadays, motion controls are standard practice but that wasn’t always so. Case in point: Sega’s Hang On which was the first game to feature a full-sized motorbike replica on which you could sit and control the movements of your avatar. Additionally, Hang On was the only arcade cabinet of its kind over three decades ago and boasted 16-bit graphics which meant it looked damn good…for the era.
[amazon template=right aligned image&asin=B00DEKOYGO]

1986: Out Run (Arcade/Sega Master System)
Is it a driving game or a racing game? Oh, how cares! It belongs on this list. In fact, you’ll still see this cabinet in arcades, a testament to the game’s enduring popularity. The sit-down cabinet even shook and moved as the player interacted with the environment. You also got to choose your soundtrack via an in-game radio as well as the cross-country path you wished to take. This one was a best-seller in ’87 and had its last entry in the series as recently as 2006.

1989: Indianapolis 500: The Simulation (PC)
If Out Run was for road-trippers than Indianapolis 500: The Simulation was for hardcore racing fans and gear-heads in search of a sim experience. Better yet, players could customize their cars for improved results and offered four different settings ranging from 10 to 200 laps. You needed a lot of trial and error to get the right set-up but that approach has served games like the highly popular Gran Turismo series quite well, too.

1990: F-Zero (SNES)
When Super Nintendo hit stores in 1990,several fantastic games were introduced but F-Zero truly stood out from the pack. This game’s sheer speed and fluidity can be attributed to the Mode 7 graphics (those unique camera-shifting techniques that still look impressive) while the in-house races always kept you, as a driver, on the edge of your seat. Set in the year 2560, F-Zero led to an entire sub-genre of futuristic racing games such as all the entries in the Wipeout series.

1991: Road Rash (Genesis)
Developed by Electronic Arts and originally released on Sega Genesis, this predecessor of Grand Theft Auto combined the beat-’em-up genre with Outrun-style cross-country racing. If you’re the type who finds fun in punching the crap out of some dude while zooming down a highway at a hundred miles per hour, this is the game for you. You even had to fight off cops at times in the game, and that was a crazy thing in the early ’90s.

1992: Virtua Racing (Arcade/Sega Genesis)
This arcade hit was not the first of its kind to have 3D polygonal graphics. Namco gets that honor with 1988’s Winning Race. However, Virtua Racing did it much, much better with a higher frame rate, polygon count, and more visually appealing environments. V.R. did so well that many regard it as one of the milestones in our transition from 2D to 3D graphics in video games. Another innovation? The ability to pick your view style (first person or third person). That’s something we largely take for granted in today’s world.

1992: Super Mario Kart (SNES)
You can’t have a classic racing game list without mentioning Super Mario Kart as this franchise made racing games with the broadest appeal. So many other “kart racers” have come after it too like Sonic All Stars Racing and Crash Team Racing. Amazingly with Mario Kart 8 (on Wii U and the upcoming Nintendo Switch), this series is just as strong as it has always been. Just don’t get too upset on Rainbow Road, because you will fall off the course about every five seconds.

PS. Ever wonder what the top five video games of the last five years are? We’ve got you covered. How about the history of sports-related video games? We’ve got that too.

1 comment on “The Race Is On: The Most Historic Video Games with Race Cars”