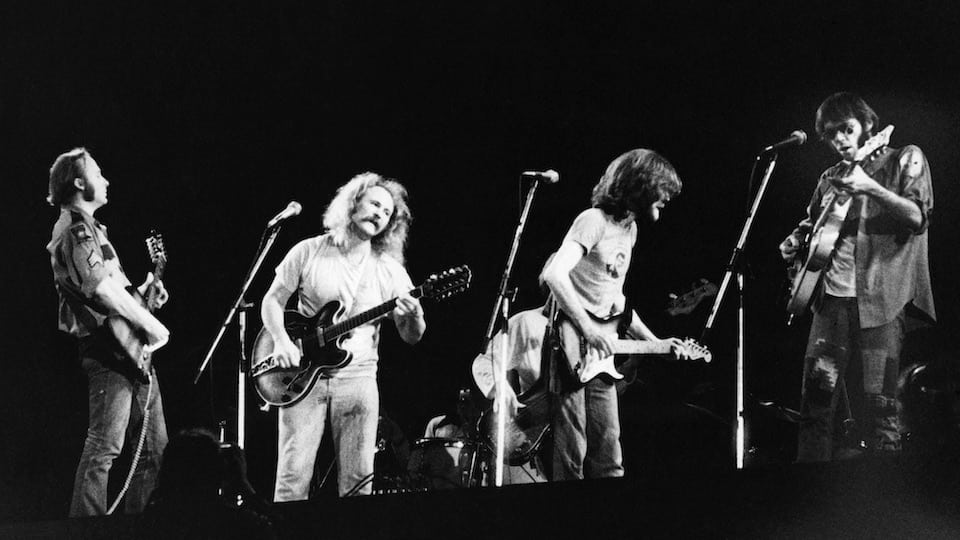 Peter Doggett made a storm in the Beatle world after unveiling a book (You Never Give Me Your Money: The Beatles After the Breakup) which displayed the difficulties the Liverpudlians faced consigning their sixties dream to an end. It was a work that dignified Yoko Ono in her dual role of person/artist, explored Paul McCartney’s disinterest in the Let It Be project, and cited The White Album as the band’s most rewarding work. It was an illuminating book that meticulously explored the breakup. You Never Give Me Your Money wasn’t always a pretty book to read but understood the complexities these brilliant men faced in a world more material than mythological. Fittingly, to celebrate Woodstock, Doggett has commemorated one of its most fondly remembered acts. On August 18th, 1969, Crosby, Stills, Nash, and Young walked on stage as folk singers and walked off rock gods. Doggett’s new book, CSNY: Crosby, Stills, Nash & Young chronicles their tumultuous journey.

They were one of the first supergroups. English musician Graham Nash (The Hollies) turned to America for sunnier climes and music with Stephen Stills (Buffalo Springfield) and David Crosby (The Byrds). Piecing together past interviews with the three men, Doggett explores the journey which led them to invite budding singer/songwriter Neil Young to record the watershed album Deja Vu. Their time together was limited, their legacy infinite. Doggett writes that though they worked together for only two of the past fifty years as a functioning unit, the remaining forty-odd years were spent fighting off questions about why they’re no longer together. Each of the songwriters was inducted twice into the Rock and Roll Hall of Fame, their past work as pivotal to their collaborative work as any contemporary influence.

Doggett observes the surroundings by which the four young songwriters pursued. Stills would join guitarist Jimi Hendrix at a bar, leading to the duo taking to the bandstand. Tempestuous in art, Stills could be tempered in argument, coming out swinging at Nash when he heard they were at cross purposes in their romantic involvement with Rita Coolidge. Doggett paints a three-dimensional portrait of all his subjects, as cannily but as honestly as he did with The Beatles. Young, gifted with melody, shows a streak of tangible arrogance. Though his bandmates performed “Ohio” in his absence at a 1971 concert, he seemed uninterested in dignifying their respective work with a cover. Crosby displays a cavalier attitude, shocking even for its time, while Stills, at twenty-five, acts as brilliantly yet as foolishly as anyone in their mid-twenties would. Nash found himself in a position where he had to leave his Anglocentric influences to put some “swing country” into his work for it to reach album approval.

Doggett, though contemplative, is never waggish, as appreciative of their extraordinary back catalog as he is in documenting their daily lives. These were four men compatible with their Woodstock image, channeling caustic confessionals and potent pictures into their songcraft. Together, they created transcendent art. Behind their songs, four troubled men stood. They traveled separately and together, emblematic of an era that ended when the weighty Richard Nixon left office at the turn of 1974. Just as the era did, Nash ruefully noted the band “lost it on the highway.” It’s a history of a musical touchstone, pinpointing the power, pleasure, and perfection that could turn four songwriters into the legends of 1969. Pour yourself a helpless glass to teach your children how to carry on with the memories of this book.