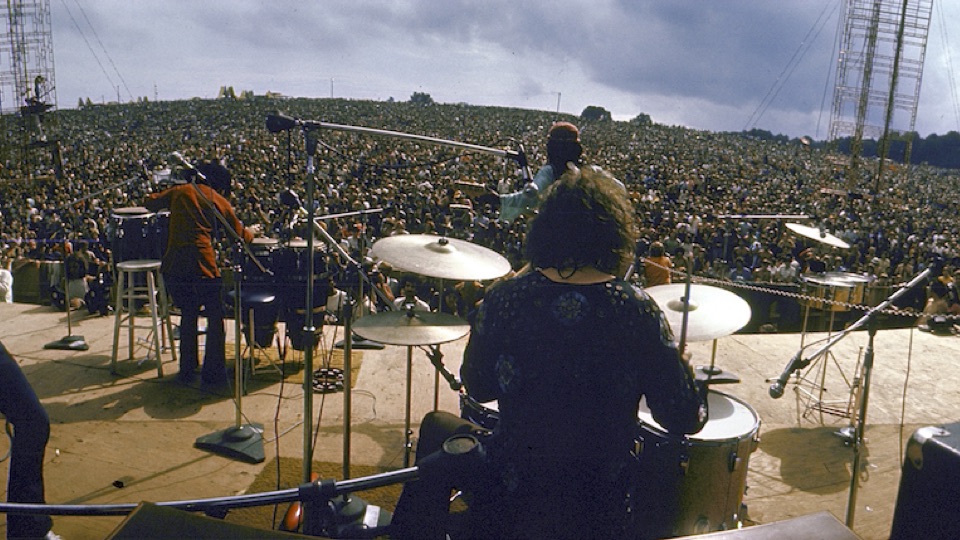 For three days, it was the center of attention for a million-plus eyeballs. To start, it supported the likes of Richie Havens and his acoustic guitar … then the blasting speakers that delivered the mindblowing music of Jefferson Airplane, Ten Years After, and the Who … and ultimately Jimi Hendrix’ iconic rendition of “The Star-Spangled Banner.”

It was the focal point for announcements about “iffy” acid, a random birth or two, and the shutdown of the New York State Thruway (courtesy of Arlo Guthrie).

The stage at Woodstock was nearly as big a deal as the artists who performed upon it. Only 80 x 100 feet, it was the platform – quite literally – for one of THE defining moments of the 20th century.

When the original site (Wallkill, NY) for “three days of peace and music” fell through, the Woodstock promoters lucked out when farmer Max Yasgur rented them his hayfield. However, time was tight. Ten weeks had been originally allotted to build the stage set-up for the festival; now, the team essentially had to start all over — and with barely 3 weeks left on the schedule.

Even before the festival began, fans were already arriving at Yasgur’s farm. The organizers had a choice: put the time in on the fences…or the stage. The stage got the nod. On August 15, the festival officially kicked off with an inspired set by Richie Havens.

In the crowd of 500,000 was a local Sullivan County resident, 15-year old Steve Gold. He managed to get backstage to nervously say “hi” to Grace Slick and Janis Joplin. For those mesmerizing days, he (like everyone else) was steeped in the life-changing vibe of Woodstock. He recalls that in an era before Instagram, EVERYONE was focused on the stage – not on their phones or anything else. It was one of those moments that grabbed the attention of half-a-million people — and held it.

And then, it was…over. It took three weeks to break down the stage set-up, roughly the same amount of time the organizers had had to recreate it at Bethel.

Fast forward to the fall of 1969. Teenager Steve Gold is back to “real life,” helping out his girlfriend’s dad, doing repairs at one of the many area bungalow colonies. There were plans to put in a paddleball court. As Gold helped him unload a bunch of plywood boards from a truck, he was told that the wood had been part of the stage at Woodstock.

How did such an iconic piece of rock history wind up on a random construction project? Turns out that the festival organizers were selling off whatever they could to make up for the financial beating they’d taken after having to make Woodstock a “free” concert at the last minute. Wood, wires, light bulbs, whatever – if it brought in some quick cash, off it went.

With the half-century anniversary of Woodstock looming, Gold began reflecting on that moment when he’d helped unload those very special pieces of plywood. He decided to investigate, and headed back to the scene of his earlier teen gig.

There it was, covered over in some brush, but still there: parts of the original Woodstock stage. And in damned fine condition, considering the elements it had been up against for nearly 50 years. Gold, in part, credits the particular “magic” of the festival for keeping those boards in such good shape. Almost as if they were waiting to be rediscovered.

During his own initial inspections of the panels, Gold noticed certain colored markings on the wood that had been visible during portions of the Woodstock movie. Gold then tapped the expertise of Wade Lawrence, director of the Museum at Bethel Woods. Lawrence also noted certain distinctive paint marks and nail markings.

Yet Gold wasn’t taking any chances. He worked to get those pieces of wood further authenticated and determine their provenance. First, was the manufacturer, “Weyerhauser,” who identified the pieces via their unique triangle-mark. Next, the Wood Science Consulting firm did a deeper dive into the samples that had been sent over: “Based on observations made during the examination of the plywood, the species of the panel samples, a review of the standard PS 1-66 for plywood… and the painted panel sections, it appears that the plywood in your possession is authentic and from the Woodstock Festival.”

So there they were: large pieces of the original Woodstock stage. Found! The very boards upon which Joe Cocker, Janis Joplin, Crosby Stills and Nash, and others had left their mark during that pivotal moment in the culture.

A crucial rock artifact had been located and was now in the hands of someone who wanted to preserve and share it with other generations, both those who had been at the festival and those who could still appreciate the vibe. Steve Gold soon formed “Peace of Stage.”

A portion of the original Woodstock stage is now on display at the Museum at Bethel Woods. Smaller portions of the stage are being offered for sale, with most of the proceeds going to various charities. Those charities have been carefully curated to reflect the spirit of the original festival. They range from support for the Viet Nam War Memorial (a key focus at the time of the festival) to programs that feed the hungry, prevent bullying/suicide, support stronger gun laws, and more. An upcoming initiative will have Peace of Stage partnering with the Jimi Hendrix Foundation to help schools provide musical instruments to students with autism.

While the crowds – and sadly, many of the iconic musicians — have vanished 50 years later, it’s nice to know that some of the “hardscape” of Woodstock is still around.  And it’s lost none of the power of those three remarkable days of peace and music.