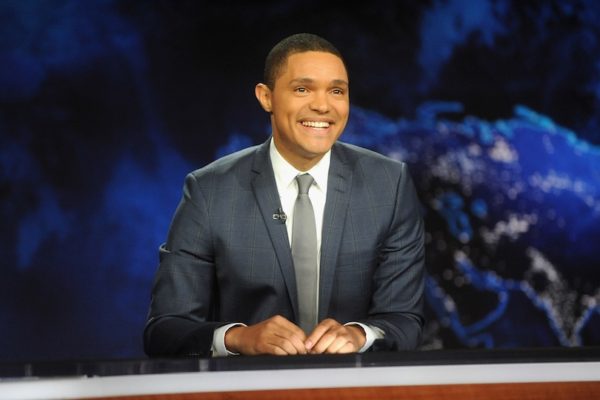 Trevor Noah is bright-eyed, wise, goofy, dimpled, and endearingly Muppet-y. He has also managed to do what at one time seemed impossible: To fill the enormous shoes of Jon Stewart when he stepped down as host of Comedy Central’s The Daily Show after 16 years. Back in 2015, the young South African stand-up comic was far from a major household name nor particularly active in political matters, yet he has managed to not only survive the inevitable kneejerk rejection from some Stewart fans but built up a sizable audience of his own drawn to his unique charms.

The Daily Show’s History
Let’s backtrack a bit. The Daily Show began its tenure in 1996 as a newsy late night talk show (or a talky late-night news show) that was heavy on satire with a youthful spin. The original host was the former ESPN anchor Craig Kilborn, who had a dry, smarmy vibe as he wittily reported on pop culture and human interest stories. He exited after three years, his primary legacy being the “Moment of Zen,” a short surreal clip at the end of each episode, a device that continues to this day. Then comedian Jon Stewart took over the hosting chores – as well as head writer and executive producer – and began shaking up the proceedings with his hilarious political outrage and quirky charisma. Left-leaning but sparing no one (particularly cowards and hypocrites), Stewart shared his passions with his largely 18-49 year-old demographic and ushered a generation through presidential elections and national tragedies with insight and edge. Originally a satirical news show, The Daily Show ironically evolved into an actual source of news for millions. His departure to pursue animal rescue activism and more time with his family was nearly universally bemoaned.

Trevor Noah’s Reign
Undeniably, Trevor has had an uphill battle from the start, but he has handled the comedy anchor desk with aplomb. He kept a lot of the familiar graphics, writers, and correspondents, then added in some new bits of his own. He has an appealing South African lilt and an intriguing perspective on American customs, along with a silly giggle, cute dance moves, and willfully awful imitations. (His “Ben Carson” is a piece of inspired absurdity.) In short, he is not Jon Stewart 2.0. He may have been an acquired taste for Stewart loyalists, but his breakthrough interview with conservative political commentator Tomi Lahren suggested his interview chops may be stronger as he treated the 24-year-old pundit with total civility while allowing her to hang herself with her adolescent defiance and unintentionally hilarious inconsistencies. He listens carefully, clearly reads the featured books, and conveys real empathy with everyone from Malala Yousafzai to DJ Khaled. His jokes may be a bit less nuanced than Stewart’s, but his ineffable sense of joy is hard to resist.

Part Silly, Part Scathing, Part Activism
Noah’s politics are hard to pin down. Sure, they skew left but with a more sweeping worldview than either of his predecessors had. Indeed, his South African roots are often in evidence, allowing the audience to view America through a different lens. That distancing effect may be why his Donald Trump impersonation is so winning. It may not have Rich Little accuracy but it does capture Trump’s cartoony essence through pursed lips and idiosyncratic hand gestures. (His “Melania” take is equally delicious.) And while The Daily Show continues to have many side-splitting moments — as when Noah pointed out the accidental appropriateness of a Kellyanne Conway interview while the Merrie Melodies theme played away in the background — he’s also not afraid to go for the jugular, like when he eviscerated Bill O’Reilly with equal parts rapier wit and genuine fury. His banter with his correspondents is always loose and on point; and his affection for activist luminaries such as Philadelphia Eagles captain Malcolm Jenkins and conservationist/hip-hop artist Xiuhtezcatl Martinez reveal his ability to be inspired, a positive aspect that we can take with us after the show.