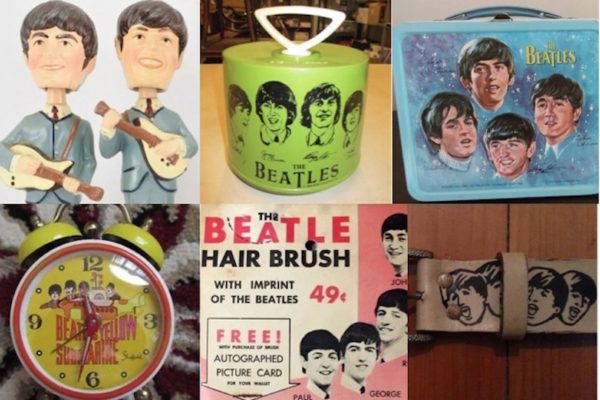 If you grew up a Beatles fan in the 1960s, chances are good that you had an item or two (or ten) that featured the faces of the Fab Four. John Lennon, Paul McCartney, George Harrison, and Ringo Starr all branded their images on a wide array of consumer-friendly products. Lunch boxes? Of course. Talcum powder? Well, yes, there was that too. After window-shopping on eBay, here are a few of the more interesting Beatles memorabilia items that you could have owned back then —  and still can if you’re willing to shell out some big bucks for these now- vintage collectibles.

45s Record Case
If you need to bring your 45s over to your best friend’s house for a Beatles marathon, you have to get them there in style. This lime green case features, as usual, Beatles’ faces and signatures. Did I mention it’s lime green? It’s lime green, folks. Lime Green!

Alarm Clock
Today, your alarm clock can wake you up to the smooth sounds of a Beatles classic. In the 1960s, this “Yellow Submarine” signature alarm clock sounded like any other. But man, this one looks cool! (No wonder it sold for $800.)

Beatle Hair Brush
If you’re going to grow a Fab Four mop top then you’re definitely going to need this hairbrush in order to get it just right. This particular package includes is an autographed picture card for a mere 49 cents. We’re guessing it’s gone up in value dramatically since then.

Belt & Belt Buckle
Well, this is just about the coolest thing ever. ‘Nuff said.

Bobblehead Doll Set
Like it or not, Bobblehead dolls have become a quintessentially all-American collectible, even when regards to the British Invasion. This particular set features each Beatle playing his musical instrument while decked out in an iconic blue suit. The facsimile signatures are a nice touch.

Lunch Box
Back in the day, the lunch box you carried to school said as much about you as almost anything else. No true Beatlemaniac could be without one. It’s easy to see why people collect vintage lunch boxes. But did your authenticity extend to the contents? In short, did you pack it with Bangers and Mash?

Mini Guitar
This New Beat toy guitar, a blast of color and form, measures just over 30 inches and originally came in its own cardboard traveling case. Although it’s doubtful you’ll be able to reproduce an Abbey Roads-worthy sound on it, you can still serenade your best girl with a quaint version of “Love Me Do.”

Model
Model building is an all-but-lost art nowadays. That was not so in the ‘60s. Back then, kids built models of cars, rockets, monsters, and – surprise, surprise — even the Beatles. If you’re ever lucky enough to find one of these that’s never been opened, will you be able to resist the temptation to put the little man together?

Talcum Powder
Why does Beatles Talc exist? It’s hard to believe that there was a demand for it. Whoever convinced the Beatles marketing department that Beatles branded talc was needed, kudos to you. And are you now pitching Beatles cornstarch instead?

0 comments on “Beatles for Sale…On eBay”