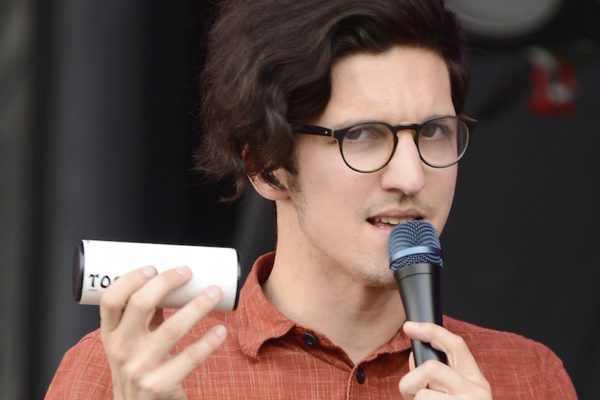 The first thing you’ll notice about Dan Croll is that he wears glasses. He’s a bit awkward, if incredibly charismatic yet there’s no cockiness or arrogance to be found. Most importantly, he carries an air of sincerity about him. While the lead single off his latest album Emerging Adulthood is entitled “Bad Boy,” the truth is that Croll couldn’t be further from that. Interestingly, music was not always this up-and-coming indie artist’s first choice. He was actually an aspiring rugby player until a leg injury derailed his career. With no future left in the sport, he turned his focus to music instead, attending the Liverpool Institute for Performing Arts. Ranking at the top of his class, he won the Musicians’ Benevolent Fund Songwriting Award in 2011 and was one of eight students chosen to meet Paul McCartney. From there, his career has only continued to soar.

Admittedly, the singer-songwriter has proven to be an unusual melting pot of sounds. The loosely-defined label Croll uses is “indie-pop,” but his work is a lot more intricate than that, composed of a unique blend of folk roots, world music and electronic. He has credited his hybrid sound to an acoustic upbringing combined with his newfound love for electronica. But listen closely and you’ll also hear the influence of hip-hop, R&B, and even hard rock.

Yet with all due respect to his musical mixings, where Croll really distinguishes himself from the pack is with his lyrics, which tend to draw from very personal topics. Indeed, Croll has made it known that he suffers from anxiety and depression and has chosen to expose his weaknesses in hopes that people would connect and relate. The title of Croll’s most recent release, Emerging Adulthood, is derived from Croll’s own personal maturation process. Using straightforward, thinly veiled narratives, he aims for an empathetic connection to listeners to let them know they are not alone. Topics range from peer pressure (“One of Us”), isolation (“Sometimes When I’m Lonely”), and even wanting to escape from yourself (“Away From Today”).

Croll’s connection to his fanbase does not stop with the music either. Since the beginning, Croll has put an intense amount of time into communicating with his base via social media. At one point, it wasn’t unusual for him to spend four to five hours a day on Twitter, Instagram, and Facebook, personally sending responses to the online adulation. As considerate as it was, Croll questioned its efficacy. Feeling a change in approach was necessary, Croll came up with an unconventional idea. As he told Nylon, “We went for a beer and joked about the idea of giving [my fans] a number. They were like, ‘Why don’t we do that?'” What resulted was Dial Dan: a periodic hotline allowing fans to call in and talk directly to the artist himself.

There’s something sweet and earnest about this enterprise, revealing as it does a desire to truly connect with listeners, person to person, inside and outside the music, free from the cold impersonal persona that is the music industry. “I think with the internet we’ve seen one extreme which is artists being intangible, you know; they can’t be touched. You can go to a show but you’re never going to meet them. You can listen to their records but you’re never going to speak to them so they become this enigma”. Croll has no interest in such a life as he said to Paste Magazine, “I have a duty as a musician with a decent fan base to be there for them.” There is no denying he’s done just that. With his unrefined genuineness, contagious smile, and quick wit, Croll is a role model for a different type of artist. We could use a lot more like him.

PS. Another artist who uses her demons to make great music.  And, he’s among the most famous musicians having had a go-round or two with mental illness – here’s a look at an under-the-radar album.