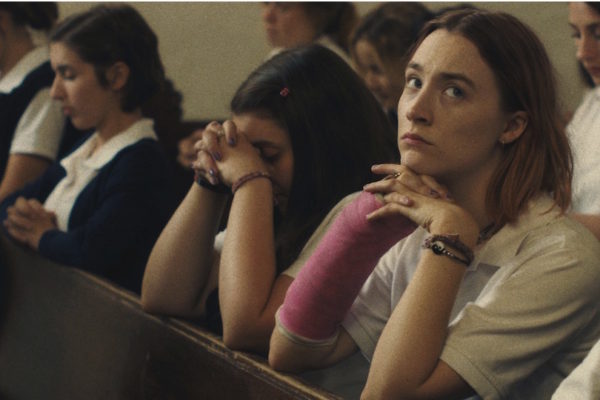 To say Sacramento high school senior Christine “Lady Bird” McPherson (Saoirse Ronan) is headstrong would be an understatement. When questioned as to whether Lady Bird is her given name during auditions for the school musical, she replies, “I gave it to myself. It was given to me by me” before fittingly launching into a rendition of Stephen Sondheim’s, “Everybody Says Don’t.” Passionate and opinionated, when Lady Bird wants something, she throws herself into it. Literally. At the beginning of the film, she throws herself out of the car during a fight with her mother Marion (Laurie Metcalf) over wanting to go to an East Coast college, thereby putting an arm in a hot pink cast. One of her wings may be broken, but Lady Bird is still determined to fly.

As much a love letter to the complicated relationship between mothers and daughters as to stubborn, youthful exuberance, Greta Gerwig’s directorial debut Lady Bird gloriously soars. A likable and subtly affecting onscreen presence, Gerwig brings that same vim and verve behind the camera with a crackling script that is often laugh-out-loud funny but has its share of quietly devastating moments, too; sometimes within minutes of each other. Lady Bird goes from euphoria at losing her virginity to brooding anarchist Kyle (a pitch-perfect Timothee Chalamet going two for two with this and Call Me by Your Name) to anger when she finds out he lied about being a virgin himself to complete anguish all in the span of a minute and a half. “I just had a whole experience that was wrong,” she says looking at the floor while an unbothered Kyle smokes in bed. Once in the car with her mother, she breaks down sobbing. It’s one of many scenes where Gerwig perfectly captures all the emotional intensity of burgeoning adulthood with equal amounts of humor and pathos.

Set in 2002 (“…the only thing interesting about it is that it’s a palindrome,” says Lady Bird), the film also nails the climate of post-9/11 America: the mild paranoia, patriotic classroom displays, the early financial hardships. This latter aspect seriously informs the relationship between Lady Bird and her parents who become even more financially strapped after her depressive, computer-programmer father (a gentle and subdued Tracy Letts) loses his job. While her father makes a concerted effort to both emotionally and financially support Lady Bird’s East Coast college ambitions, her mother is far more pragmatic and overworked. “Whatever we give you is never enough,” Marion bitterly says during a spat after Lady Bird is suspended from her private Catholic School. “Give me a number for how much it cost to raise me,” Lady Bird spits back, “and I’m going to get older and make a lot of money and write you a check for what I owe you so I never have to speak to you again.”

It’s certainly not the first or last heated argument the two will get into throughout the film, but Gerwig writes these mother-daughter interactions with such specificity that each feels different and truthful. At its heart, Lady Bird is a film about mothers and daughters and the intricacies of these tumultuous relationships. Yet somehow, the audience never questions Lady Bird and Marion love each other deeply. Two of the most revealing scenes happen when the pair are shopping for dresses at the local thrift store. In the first, Marion nags her daughter for spending Thanksgiving with her boyfriend, leading to a small fight that immediately and humorously ends when Lady Bird squeals over a “perfect” dress Marion has just picked off the rack. In the second, Lady Bird asks her mother if she likes her, and Marion answers, “I want you to be the very best version of yourself you can be.” Lady Bird asks unsurely, “What if this is the best version of myself?” Marion simply looks back at her sympathetically, knowing her daughter still has more to learn about herself.

Like its heroine, Lady Bird bursts with unending appeal and energy. You can’t help being completely charmed thanks, in large part, to Saoirse Ronan’s fierce, heart-on-her-sleeve performance (which just earned her Best Actress from the New York Film Critics Circle). She finds the humanity beneath her character’s idiosyncrasies and makes her fly off the pages of Gerwig’s lovingly crafted screenplay. As she did with Brooklyn, Ronan proves herself a formidable onscreen presence even in the acclaimed company of a tough yet tender Laurie Metcalf. The pair are simply sensational together, providing the film with its emotional core and making you want to call your own mother at the its conclusion.

PS. Growing up is never easy as these 80s movies attest.  And here’s another big indie film hit from 2017.

Photo courtesy of A24 Films