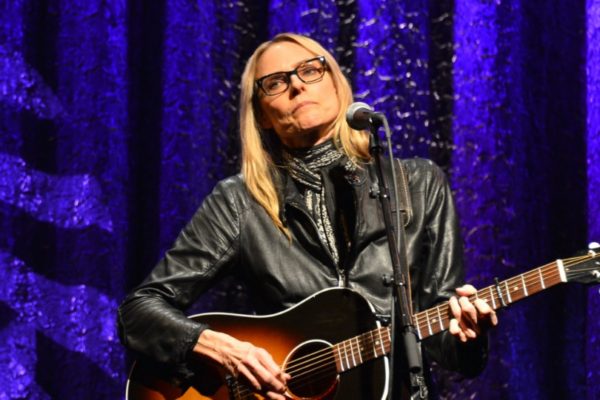 If there’s a single song among her early work that encapsulates all the artists Aimee Mann could have been, it’s “Coming Up Close.” The second song on ‘Til Tuesday’s second album, Welcome Home, it’s almost shocking to hear its low-key guitars immediately follow the keyboard-heavy opener “What About Love,” which was much closer in style to the hit “Voices Carry.” Nonetheless that five-minutes or so pointed the way to a lot of what’s come since. That’s not to say that the song would necessarily have fit on one of Mann’s more recent albums. Her wordplay wasn’t quite as adroit back then, and her instinct for the proper balance between energy and restraint (in both her singing and the music) was still a work in progress. Still, any artist with a voice recalling Chrissie Hynde at her peak who can come up with lyrics as evocative as “I felt my heart beat back a weekend’s worth of sadness” clearly has potential. The dozen or so albums — both solo and with others — released over the subsequent three decades are a testament to her fulfillment of that promise.

The latest link in the chain is Mental Illness, which was released in late-March (and is taking Mann on tour through June). Mann described it for Rolling Stone as the “saddest, slowest, most acoustic, if-they’re-all-waltzes-so-be-it-record.” That’s a bit of (clearly intentional) overstatement, but there is also a strain of truth in it. Mann is clearly aware of and playing with the overall perception — also overstated — that her work is a bit dour. She notes in the same Rolling Stone piece that the album’s title “makes [her] laugh, because it is true, but it’s so blunt that it’s funny.”

This would all be besides the point, of course, if the songs on the album weren’t so damned good. In fact, Mental Illness is arguably Mann’s strongest album since the millennial one-two punch of Bachelor No. 2 and Lost in Space. Musically, there’s a bit less variety than her 2012 release Charmer, but the lyrical corners she explores are overall more compelling. If Mann the musician isn’t necessarily pushing herself as hard, Mann the lyricist makes up the difference. To some extent, the low-key approach gives her turns of phrase more room to maneuver and catch the listener unaware.

“You size me up with your thumb on the scale.”

Those phrases from “Patient Zero” and “Poor Judge” and so many others on the record each pull the listener into that song’s particular world. It’s almost unfair to take lines out of context, because the overall impact of each song really does outweigh any single moment within. Where her growth as a singer and songwriter really shows, though, is how natural her work feels. The artist who sang “Coming Up Close” 30 years ago clearly had talent. In 2017, her comfort with portraying discomfort is virtually unparalleled.

PS. Aimee Mann is featured in our post Hehehe Meets Yeahyeahyeah: 5 Music-Themed “Portlandia” Episodes. And if you like Mann’s music, you may also enjoy our post Shawn Colvin Comes “Home.”