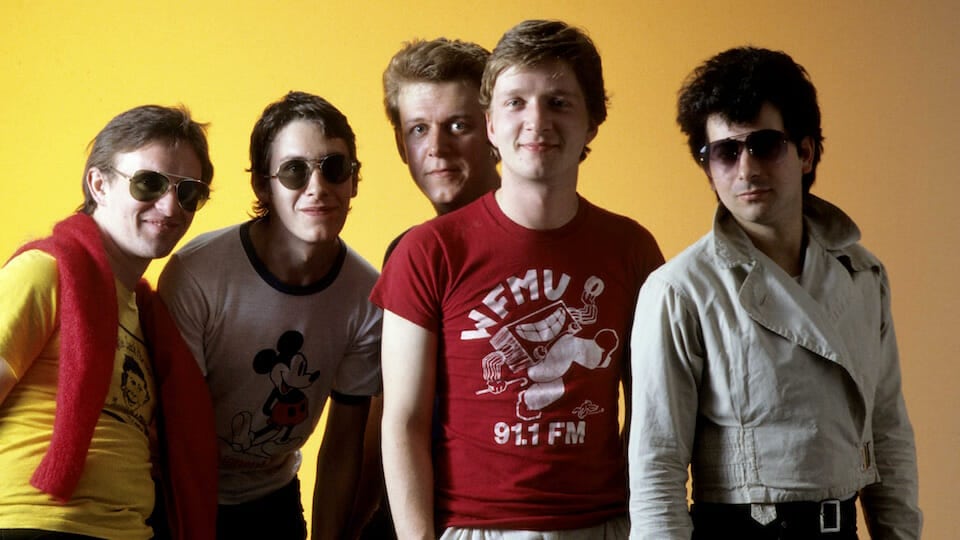 I was sitting on the beach at Point Pleasant, NJ in the summer of 1980 when an enticing sound came over the airwaves from legendary station WNEW-FM. It was the band Squeeze, with their first massive single, “If I Didn’t Love You,” which would introduce their newest album, Argybargy, to the American audience. I had given minimal notice to the band before, but this track, with each singer’s parts an octave apart, conjured an immediate reaction: “Hmmm, someone’s trying to be Lennon & McCartney!”

The British had enjoyed Squeeze for several years; they hit # 2 on the UK charts with their previous singles “Cool for Cats” and “Up The Junction.” Now, Argybargy would put them firmly in the American mind, and they would further cement their international audience with the critically-acclaimed 1981 album, East Side Story. This effort delivered a collection of tuneful songs including a bonafide hit single (“Tempted” reached #45 on the US charts). The album would transport the band’s success skyward, and cast singer/songwriters Chris Difford and Glen Tilbrook into another level of recognition.

And that would crush everything.

Related: “Why Does (Almost) No One Record Squeeze’s Songs?”

A spring 1981 review of East Side Story in Rolling Stone magazine declared: “In songwriters Glen Tilbrook and Chris Difford, the British New Wave has finally found its own John Lennon and Paul McCartney.” They didn’t know it at the moment, but the magazine’s single unique line would prove the most transformational of their career – like it or not.

Soon their record company used that quote at every chance when promoting their subsequent tour. They made sure their follow-up album, 1982’s Sweets from a Stranger, carried that message. And in case anyone missed it, every copy of Sweets that was shipped by A&M Records sported a front cover sticker repeating Rolling Stone’s Lennon & McCartney comparison.

“The timing [of the Rolling Stone review] was unfortunately not great,” Tilbrook would say years later, “because our sales numbers were really up and our records were starting to just sell, but the band was not in a happy place in the year from East Side Story to Sweets from a Stranger.”

A good majority of that unhappiness came from the major backlash to the Rolling Stone comment. The pressure to repeat their triumph, while living up to such high praise, took its toll on Difford and Tilbrook. This heaviness projected like shrapnel onto the rest of the band. “I was just confused,” said Difford in 2019, “because these Lennon/McCartney people had loads of money in the bank and we didn’t have any of those kinds of things, so I couldn’t see the comparison!”

The band’s tensions continued to build right up to their return to the studio for Sweets from A Stranger in the early months of 1982. Before the sessions began, keyboardist Paul Carrack announced he would not be coming along. Now a bad marker had been thrown and a low point for the chemistry within Squeeze produced the wrong mindset. “The band itself did not feel great; there was a dark cloud above us.” Tilbrook reflected, “It was hard work being on the road then, and it was an odd time. Really, when you’re having that sort of success, no manager is going to say, ‘You need to stop for a while.’”

Tilbrook has reflected that he and Difford let the Lennon/McCartney reference get into their heads when it came to their writing approach for the new album. “There was a little bit of time when we got a bit pompous after that [the comparison quote],” he stated in 2019, “Our writing got a little bit ‘up itself’ as the Australians might say. I think we drifted downslope pretty quickly after that.”

Difford had another view as to how the Beatles reference affected him. As he was the lyricist of the partnership, he didn’t have as much pressure as Tilbrook to produce music that would match their press clippings. “I know Glenn, he felt like it might have been a burden because he had to live up to the challenge of that kind of songwriting, which he didn’t need to do because he’s such an incredible songwriter in his own right.” But unfortunately, the outcome for Sweets from a Stranger didn’t live up to that challenge. In retrospective interviews, Difford and Tilbrook have admitted to producing an exercise in over-experimentation while releasing a flat, sometimes uninspiring effort.

Later in 1982, while touring and promoting the Sweets album, Difford and Tilbrook had some alone-time to figure out what was happening within the band and their careers. On a journey across Germany, Difford paused to confess to his partner; “On the train, I said to Glenn, ‘I couldn’t sleep last night, thinking about the band. Something has to change.” And change they did! The partners broke-up Squeeze only 18 months after putting out their best album, thus seemingly leaving the scene when they were at their popular peak. Was it the Lennon/McCartney curse? Difford has said with a smile the problem was that they knew they were not John and Paul, but rather: “We were the Captain & Tennille.”

Chris Difford and Glen Tilbrook went on to make a duet album together, then a few years later, they would re-boot Squeeze, with a handsome level of success and popularity. History would show that the more distance they put between the Rolling Stone comparison and their output over the next 45 years, the better they were to establish themselves as one of the very best songwriting teams in rock.

Postscript: There are two Beatle “close encounters” for Difford and Tilbrook that make for interesting connective tissue:

When planning in 1981 for the recording of their soon to be blockbuster album East Side Story, Squeeze had reached out to Paul McCartney requesting his interest in producing the effort. They were initially met with a positive response, but once Paul began recording his Tug of War album, he backed away from the Squeeze project, availing the opportunity to Elvis Costello.

Secondly, during the year between East Side Story and “Sweets,” Chris Difford likes to tell the story of when he finally met McCartney in the flesh. Paul jokingly asked him: “Which are you, Lennon or McCartney?”….and Difford humbly responded- “I’m Ringo!”

8 comments on “Difford & Tilbrook… and That Unfortunate Comparison”