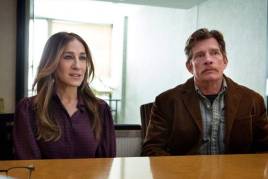 Sarah Jessica Parker fans are finally able to enjoy her return to television, 12 years after Sex and the City ended its run, only this time, it’s not exactly as Carrie Bradshaw. We travel from Manhattan, north to Westchester County, where Parker is still impeccably dressed, but this time her names is Frances, and she’s a suburban mom, a corporate recruiter who’d rather be an artist, and someone who is desperately out of love with her spouse and in some ways, with her life.

Divorce, which airs Sunday nights at 10 on HBO, is both dark and comic in its portrayals, as it takes a look at a marriage on the brink and a couple who’ve become strangers to one another; it’s an examination so many can relate to, once the kids are older and the marriage is, too. The show paints a vivid portrait that reveals a sad image, with the subjects asking “where are we now?” When Robert, Frances’ offbeat yet devoted husband, asks Frances where things went wrong she answers, “perhaps when you grew the mustache?”

After an accidental shooting by Frances’ drunken friend at her husband’s 50th birthday party, Frances is forced into serious self-reflection, and is certain she wants out of the marriage to Robert, who is an eccentric real estate developer. Robert is played convincingly by Thomas Haden Church of Sideways fame, and for those who enjoyed sitcoms of the 90s, played the lovable, goofy mechanic Lowell on the TV series Wings. Molly Shannon, Charlie Kilgore and Geoffrey Owens play supporting roles in the show as friends and Jermaine Clement appears as Frances’ lover.

Frances struggles with her feelings of dissatisfaction, tries to protect her children and keep up with her job, but indulges longtime selfish desires such as aspiring to run an art gallery, and finds herself looking at gallery space with a real estate broker despite her marriage crumbling around her.

Divorce examines the core of marriage and relationships, and how money, success and satisfaction factor into the marriage equation and can be so ultimately devastating. Anyone in a marriage or committed relationship can relate. Robert thinks they can work together to repair the damage, but when Frances’ affair with another man is brought to light, Robert’s anger at her erupts, he locks her out of the house and becomes fixated on not only divorce but on casting her out from the family to make her truly pay for her extramarital sins. His anger is palpable as he throws Frances’ purse in the garbage and leaves a grocery bag filled with her bras on the front steps. Church adeptly illustrates something similar to the stages of grief, with Robert’s initial unwillingness to accept Frances’ feelings, as he progresses towards starting to see the cracks in their marriage foundation, his anger over her infidelity, and finally, his admittance of the true problem and its inevitable conclusion as he stands in the hallway of the house, having packed his bags.

Their attempts at counseling are wildly comical and unsuccessful, as well as their dealings with their own children who they desperately want to protect; yet who are old enough to ultimately reveal their insight into what’s truly going on.

Robert tries to throw himself into his work as he digs a deeper and deeper financial hole for himself as he buys properties he can’t afford, and learns that the couple’s attempts at mediation might cause him more significant financial strain.

I knew before the show aired that I would without a doubt watch it, primarily because of a longtime infatuation with Parker that goes back to her childhood days as Annie and a teenage geek on Square Pegs, and a true devotion to Carrie Bradshaw. The show also appeals as it possesses a unique premise; I couldn’t remember a TV show that had the unraveling of a marriage as its primary focus-over the years many dramas and sitcoms had divorced characters, but the divorce was merely a circumstance, not a main topic, like Bonnie Franklin playing the single working mom on One Day at a Time, back in a time where divorce wasn’t as common as it is now.

The show lives up to the hype. Frances and Robert are real. The characters peel away their layers little by little as you see what can happen to a relationship after one person’s true admissions, and Parker and Church convince the viewer of their struggles as a real couple, exhibiting the best and the worst of people as life’s challenges get the better of them. They’re believable. You’ll feel as though you know them, or you know people like them whose life choices and situations didn’t end up in the place anyone would think. Although Parker still looks abnormally attractive at seven in the morning while running to the bus stop in her pajamas, her discussions with Robert are honest and true-to-life. The show also has the unique ability to pull at your heart strings, and make you laugh a little as the characters try to come to terms with their unpleasant realities. Don’t miss it.

0 comments on ““Divorce”: Till Hate Do We Part”