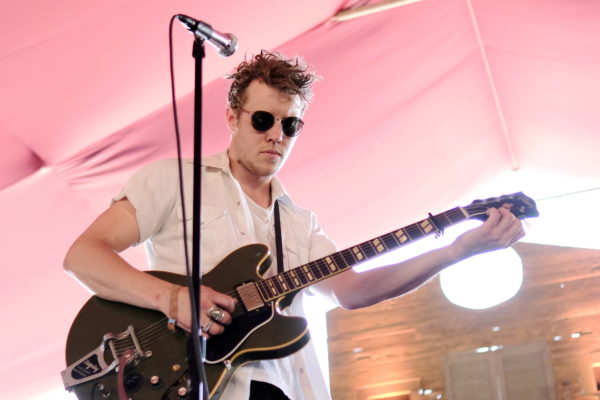 I know a little bit about genre crossing, having made albums over the last 20 years ranging across punk pop, indie pop, “Americana,” neo-swing, and most recently an album which mixes up pretty much everything I know how to do. So my ears always perk up when I hear about an artist who doesn’t fit comfortably in one category. Anderson East, who’s gotten some tabloid attention recently due to his high profile relationship with Miranda Lambert, is certainly one very successful example. East showed his talent early, forming a band and writing original songs in seventh grade, in his hometown of Athens, Alabama. He moved to Nashville after college and made inroads quickly, working with Holly Williams, the daughter of Hank Williams, Jr.

He didn’t take the obvious path for a guy from Alabama with a great voice, working in Nashville. His full length debut was a double album, Flowers of the Broken Hearted (2012), each disc in a different genre. The “White disc” is his own brand of progressive soul, while the “Red disc” is a darker sounding rock collection. The album was a PledgeMusic funded project which benefited clean water projects, and it’s become a bit difficult to find, which is a shame because it’s very interesting and amazingly sure-footed for such a young singer songwriter.

East continues to work an interesting mix of approaches, and his major label debut, Delilah (2015, Elektra) has done very well, garnering a lot of AAA airplay. He had some help from people like Sturgill Simpson and Chris Stapleton, but hasn’t lost his taste for variety and classic genres.

The album emphasizes an assertive classic soul sound, with tasty horn arrangements and a raspy delivery. But East can’t stay in a box, so we get numbers like the closer, “Lying in Her Arms,” which features a semi-swallowed tenor croon that wouldn’t be out of place in 80s pop country (his tone reminds me a bit of Dylan on “Lay Lady Lay” as well); the gospel-tinged “All I’ll Ever Need”; and the lower-key indie country flavor of “What a Woman Wants to Hear.”

I’ll be curious to see what Anderson East does next. Personally, I hope he doesn’t find himself pigeon-holed as a southern R&B singer, even though he does that very well. We could use a little more freedom of movement in pop music, a willingness to let even relatively mainstream artists follow their ears wherever they lead.

0 comments on “Soul, Country, Pop and Rock in One Tuneful Package”