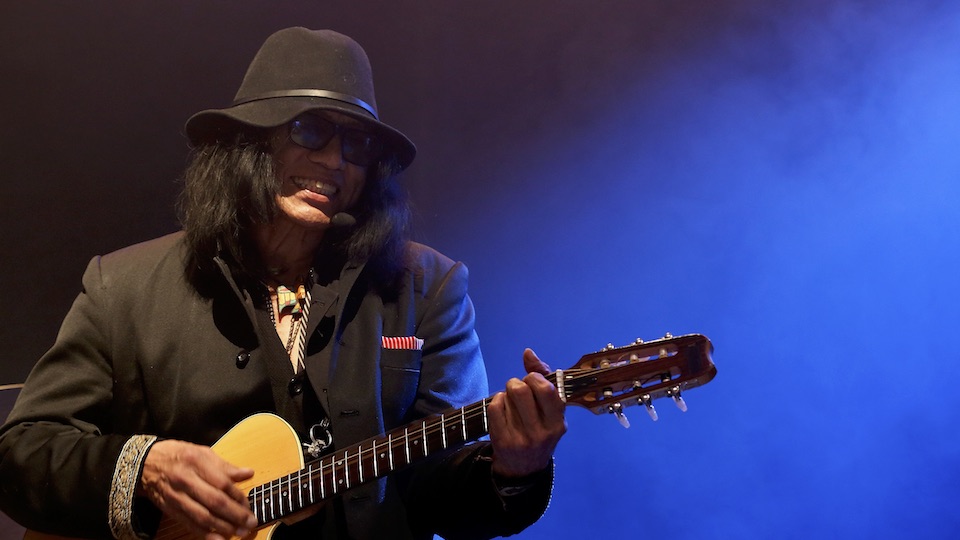 Before watching the 2012 documentary Searching for Sugarman, I had no clue who Rodriguez was. Who? You’re entirely forgiven for not knowing. In fact, unless you’re a South African of a certain age or you happen to have seen this underappreciated doc, there’s a very good chance the name Rodriguez means nothing to you. However, do a quick search of this Mexican-American musician’s work, and I guarantee you’ll be sorry his folksy tunes have passed under your radar for so long. In light of the upcoming Academy Awards, it’s the perfect opportunity to revisit Malik Bendjelloul’s Oscar-winning documentary about a mysteriously forgotten singer whose Rock ‘n’ Roll fairy-tale is as uplifting as it is remarkable.

Big things were predicted for Sixto Rodriguez in 1970. Having been discovered by two well-seasoned music producers in one of Detroit’s seedier dive bars, he was immediately offered a two-album contract with Sussex and A&R Records. His politicized lyrics and rich, tobacco-steeped voice drew critical comparisons with Bob Dylan, and his producers were certain that he could reach similar fame as an “inner city poet”.

However, neither his breakthrough album Cold Fact nor his follow-up album Coming From Reality managed to sell and Rodriguez was promptly dropped from the label. The failed singer turned to work in the city’s booming demolitions industry, his career as a musician seemingly disappearing through the cracks of American counterculture. As far as Rodriguez and anyone who knew him was concerned, this was the end of his story.

That is until years later, a bootleg copy of Cold Fact made its way to South Africa, where its popularity spread through word of mouth. Unbeknownst to Rodriguez, his anti-establishment songs became the revolutionary anthems of the anti-apartheid movement. South African record companies soon picked up the distribution rights for the album and sold around half a million copies. For South Africans, Rodriguez was bigger than Elvis or The Rolling Stones. However, in a pre-Internet age, no one could find anything out about this mysterious cult icon. Rumors spread that Rodriguez had committed suicide on stage – some claimed he shot himself in front of his audience, others heard he set himself on fire at the end of a show. In the absence of fact or truth, the mystery surrounding Rodriguez grew.

Searching for Sugarman moves between Cape Town and Detroit as late director Malik Bendjelloul follows South African record store owner Steve Segerman and music journalist Craig Bartholomew on their quest to uncover the truth about who Rodriguez really was and what happened to him. Using the lyrics and the little information printed on the back of the album sleeve as their only clues, these two superfans began to piece together the enigmatic puzzle of Rodriguez’s story.

The film takes us on a journey that spans continents and time, weaving a story that is so outlandish and implausible that it can only be true. Bendjelloul cleverly unravels the singer’s extraordinary tale through the stealthy structuring of his documentary, concealing key information about Rodriguez until late in the film and heightening the mystery surrounding the singer through a combination of talking head interviews, archive footage, and dreamy animated sequences. Searching for Sugarman is by all accounts as much a detective story as it is a rockumentary, inviting viewers on a fantastic ride-along with the musicologists who were determined to unearth Rodriguez and his career.

What really drives the film though is the accompanying soundtrack, taken from Rodriguez’s two albums as well as previously unheard tracks from an unfinished third album. His hard-hitting lyrics about the cruelties of inner city living paired with his lilting guitar strumming and brittle honeyed voice will leave anyone hearing songs like “I Wonder”, “Inner City Blues” and “A Most Disgusting Song” utterly shocked that Rodriguez didn’t become the global superstar he so clearly should have been.

Like Rodiguez’s affecting music, Searching for Sugarman is a sincere blend of heart and bitter realities. While Bendjelloul may have started his film in search of a man, in the end, he found something so much greater. This is a story about fans, faith, and keeping dreams alive. For anyone who has felt the higher power of what music can do, this one’s for you.

1 comment on “Searching for Sugarman: A Rock Fairy Tale with A Happy Ending”