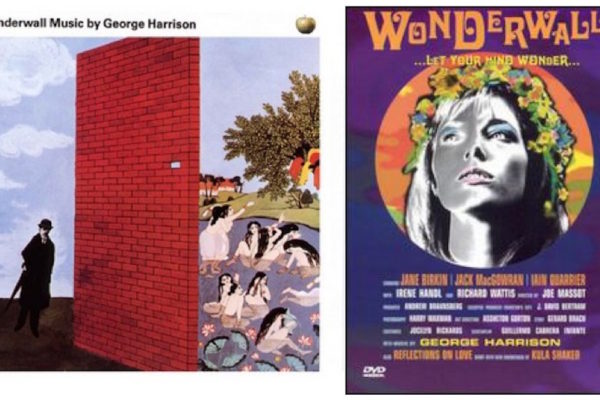 In 1995, the Britpop band Oasis exploded into international fame with the hit single “Wonderwall.” Composer Noel Gallagher had originally entitled the song as “Wishing Stone,” later explaining that a person’s “wonderwall” refers to the “imaginary friend who’s gonna come and save you from yourself.” But Beatles fans weren’t even remotely fooled about the origin of the song title, knowing full well that Gallagher and his Oasis bandmates were huge Fab Four aficionados. To the ears of Beatles fans, “Wonderwall” clearly found its roots in George Harrison’s Wonderwall Music, the soundtrack to a 1968 indie film directed by Joe Massot.

See Related Link: The 10 Best George Harrison Songs You May Have Never Heard

Released three weeks before the Beatles’ monolithic White Album in November 1968, Wonderwall Music marked a number of “firsts” in the world of Beatledom: It was the first solo album by a member of the band, as well as the inaugural LP to be issued on the Apple record label.

For his part, Harrison had conducted several of the recording sessions for the soundtrack in the heart of India, where he had access to an array of exotic sounds and instruments. Directed by Massot, Wonderwall was unabashedly an art film with high-minded storytelling pretensions. The movie traces the life and work of an introverted scientist named Oscar Collins (played by Jack MacGowran), who becomes obsessed with his neighbors, especially the aptly named Penny Lane (Jane Birkin), a delectable model. The “wonderwall” of the film’s title refers to a shaft of light that streams through a hole in the wall that separates their apartments, illuminating Penny while she poses during a photo session. As time passes, Oscar’s obsession begins to overwhelm him, and soon he drills even more holes in order to observe Penny’s every move.

Harrison understood implicitly that the film’s success depended upon a deftly constructed soundtrack that captured the nuances of Oscar’s runaway mounting obsession. At EMI’s Bombay facility, George recorded a series of ragas for the Wonderwall Music soundtrack, while also preparing the instrumental track for a new composition — destined to be the B-side of the Beatles’ “Lady Madonna” single — entitled “The Inner Light.”

As Massot later recalled during an interview with Spencer Leigh, “I asked George at the opening of the Beatles’ boutique if he would like to do the music for Wonderwall. I told him that it was a silent film and his music would provide the emotion for the characters. Quincy Jones told me that it was the greatest soundtrack he had heard, but the movie was too far out for some audiences. It did well in London, though.”

While Massot’s Wonderwall had difficulty finding an audience, Harrison’s Wonderwall Music established new inroads for World Music as a rapidly evolving genre. As Mojo’s Michael Simmons observed, Harrison’s LP was a “groundbreaking blend of Bombay and London.” Working alongside the likes of John Coltrane and Yehudi Menuhin, the Quiet Beatle had succeeded in transforming authentic Indian sounds into commercial success.

As The White Album dominated the global LP charts into the winter months of 1969, Wonderwall Music succeeded in cracking the American Top 40, a remarkable feat for a genre that was all but invisible to Western audiences only a few scant years earlier. Having successfully imported Indian music and philosophy to the West, Harrison proved that the Beatles were world-breakers in more ways than the fans watching The Ed Sullivan Show on a fabled Sunday night back in February 1964 could even possibly have imagined.