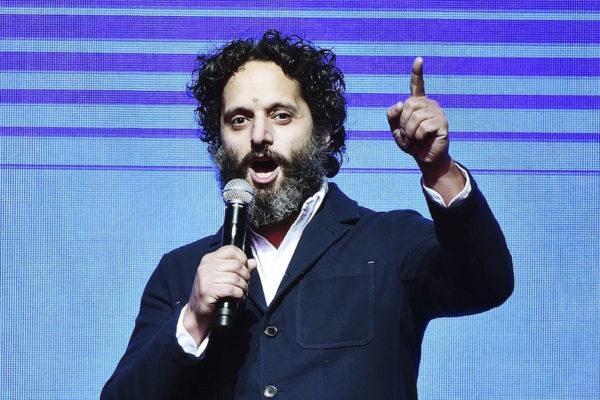 “How did this movie ever get made?”  It’s a question as old as time, or at least as old as that one time you watched Jason X on Showtime and wondered not only how but also why someone thought this was a good idea? If you’re not familiar with the How Did This Get Made podcast hosted — by Paul Scheer, June Diane Raphael, and Jason Mantzoukas — then you’re in for a real treat as this comedic trio dives deep into the insanity — and the hilarity — of “WTF” classics like Battlefield Earth, Leprechaun: In the Hood, and Xanadu. The concept may not seem groundbreaking at this point but here’s why the show works so well.

The Hosts Convey Pure Enthusiasm
June and Paul are married, while Jason seems to be that guy living in the apartment above, a neighbor who pops into their kitchen to raid the refrigerator while they sleep. It’s a crazy intimacy they relate as they pick apart a superhero flick like Catwoman with surgical precision. None of it is mean-spirited and their choices of films seem to be based on a movie’s ability to stand out in a uniquely head-scratching way. In short, they love the preposterous. The giddiness they share while noting story arcs that make no sense is contagious, something you can hear from the sound of the raucous crowds recorded at their live shows.

Funny Questions Are Asked
The HDTGM crew zero in on some pretty amusing puzzlements. Like “Why does Jean-Claude Van Damme’s hair regress as he moves forward in time during Timecop?”  “Considering the title, how come the daughter isn’t the focus of  My Stepmother Is an Alien?”  “Shouldn’t Mannequin 2: On the Move have been about a ‘male-equin’?  Anybody who’s seen the rom-com The Lake House will shout in agreement when Jason asks: “How much time do they actually spend standing in front of the mailbox?” When it comes to sci-fi especially, HDTGM probes into crazy plot points with a level of commitment worthy of Scully and Mulder.

Jason Is Perhaps The Funniest Man on Planet
Anyone who has seen Mantzoukas as “Rafi” on The League or Janet’s boyfriend on The Good Place knows he can’t help but be funny. So, when he says things like Jennifer Aniston is ageless and “may be a Highlander” or gives an incredulous response upon learning that the name of the villain in Superman IV is “Nuclear Man,” get ready to laugh… hard. When he then wonders how Nuclear Man can fly Mariel Hemingway into space where she doesn’t “implode and become a floating pile of dust,” be careful not to be drinking any soda. This guy’s delivery is everything.

Their Guests Are Comedy All-Stars
These guys have hilarious friends. To wit, Sarah Silverman, Nick Kroll, Jessica St. Claire, Whitney Cummings, and Hannibal Burress have all come on to share their comic insights with sly one-of-a-kind points of view. As Jessica St. Clair wryly points out in Superman IV, Nuclear Man’s “Lee Press-On Nails” may be the most right-on commentary regarding that doomed movie’s bizarre lack of budget.

It Makes You Reevaluate Childhood Favorites
Anyone who grew up loving My Stepmother Is an Alien will sympathize with Whitney Cummings’ honest reaction to re-watching it.  She jokingly credits the movie for “raising” her,  then details the adult trauma that comes with discovering that the movie “doesn’t even have a plot.” That’s podcast comedy gold! And although, June may speak for many who cling to the notion that Grease 2 “gets better with age,” most of the time HDTGM is encouraging us to grow up and laugh at our younger selves. And that’s a good thing!

They Helped Get The Disaster Artist Made
Not only did HDTGM brilliantly deconstruct the cult classic The Room back in 2011 but June, Paul, and Jason all have roles in the film that it inspired: The Disaster Artist. Whether the movie is as good as their podcast is up for debate. Paul has said in an interview with Variety, that they were “really lucky when we got Greg Sestero, the star and line-producer” of The Room to come on the podcast, and the stories Greg told about Tommy Wiseau and the making of that flick inspired the writers of The Disaster Artist. How often does a podcast inspire a movie? Check out the huge catalog of episodes for How Did This Get Made? on Soundcloud and Spotify to see what all the fuss is about.

0 comments on “How Did This Movie Ever Get Made?”