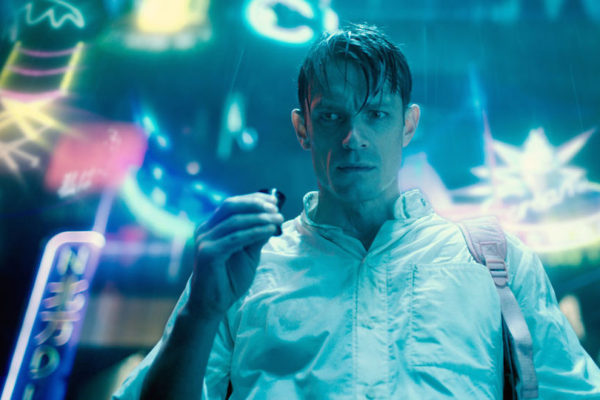 What if you could live forever? “Great,” I hear you saying, “sign me up.” But wait—how would you pay for forever? Most of us have little to no retirement savings—and if your parents live forever, too, there goes any hope of inheriting whatever wealth your family may have scraped together. And what about society — where will we all live? If the Haves can have immortality, how much harder will things get for the Have Nots? How about religion? If you believe in an afterlife, will you still be able to get into Heaven after three, four, or 100 lifetimes’ worth of sin? These questions provide a thought-provoking philosophical backdrop for the pulpy fun of Altered Carbon, Netflix’s sci-fi noir, adapted by Laeta Kalogridis from Richard K. Morgan’s 2002 novel.

Hundreds of years from now, in Altered Carbon’s very Blade Runner-styled future, society has figured out how to download human consciousness into small, glowing discs (“stacks”) that can be transplanted from body to body (“sleeves”), potentially extending life forever provided you can keep your stack intact. Of course, sleeves cost money; if you’re one of the common folk, you take what you can get, even if it’s a different age or gender from who you were. Things get much better if you’re a member of the elite — cloned replacement bodies and daily stack back-ups keep you forever young, empowered to live an almost god-like, immortal existence, whiling away the centuries in floating, pleasure palaces miles above the struggling masses.

That’s the sci-fi setting. Its story, however, is straight-up noir: Takeshi Kovacs (played mostly by Joel Kinnaman, but also by Will Yun Lee and Byron Mann; this “re-sleeving” thing is complicated) is hired by Laurens Bancroft (James Purefoy), one of the richest men on this (or any other) planet to solve a murder: His own. Someone blasted Laurens’ stack, and now his most recent backup wants to know who, lest it happen again. Kovacs is no ordinary gumshoe; in fact, he’s the sole survivor of a rebellion that tried to stop society from embracing immortality, kept on ice for his crimes against the state for hundreds of years. Trained as an “Envoy,” Kovacs is a master fighter and marksman, with enhanced abilities of observation and deduction — think UFC Champion meets Sherlock Holmes. Bancroft offers Kovacs his freedom, a small fortune, and a sleeve with really great abs (Kinnaman’s) in exchange for cracking the case.

That’s the set-up. Over the course of 10 hour-long episodes, we are introduced to a fascinating cast of characters, including Bancroft’s platinum blonde wife (Kristin Lehman) and ne’er-do-well children; a tough lady cop (Martha Higareda) from a religious family; a fanatical, unwavering assassin (Trieu Tran) who specializes in “true death” via smashed stack; a hacker (Ato Essandoh) whose daughter (Hayley Law) is trapped in virtual reality; a Russian mobster (Tahmoh Penikett) with a taste for torture; and, my favorite, an artificial intelligence hotelier (Chris Conner) who takes the form of Edgar Allan Poe, who brings some much-appreciated humor to the party. We also learn more about Kovacs, his family, and why his side ultimately lost the war.

Netflix spent a LOT of money on this one. The show is rumored to be the costliest first season of television ever, and certainly the most expensive in the streaming service’s history. You can see the money right there on the screen; Altered Carbon looks great, from its design to its effect to its memorable fight scenes, including a zero-gravity deathmatch and a later confrontation against wave after wave of naked, identical clones. The show isn’t shy about sex either, with frequent visits to the darker corners of both its high and low future society. (The show repeatedly asks, in a Black Mirror-esque way, how depraved might the tastes of the powerful become in a world where bodies are replicable?) And in an era in which TV mysteries are often prolonged beyond their breaking point (*cough* The Killing *cough*) I’m happy to report that, by Altered Carbon’s season finale, you will know not just whodunit, but how, when and why. Although life in 2018 may not be infinite, if you’re a fan of neon-soaked noir, Netflix’s highly polished sci-fi series is well worth ten hours of yours.