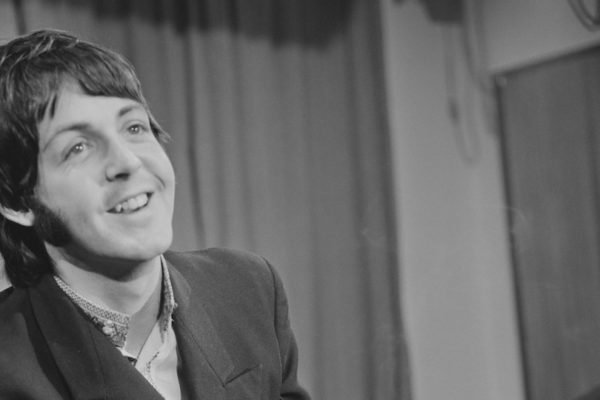 As one of the band’s final efforts before their extended sojourn in India 50 years ago, the Beatles tackled Paul McCartney’s superb new composition entitled “Lady Madonna.” During an afternoon session with producer George Martin at EMI Studios on Feb. 3, 1968, the group made short work of the song, which was both startlingly original, and yet, in true Beatles fashion, cheekily appropriated from their forebears. As always, EMI was hungry for new Beatles product to ring in the new year. During the session in Studio 3, Martin supervised the bandmates’ rehearsal for “Lady Madonna.” McCartney had been inspired to write the song after seeing a magazine photograph of an African woman holding a baby. The songwriter was especially intrigued by the caption, which described the woman as a “Mountain Madonna.”

With his “Elvis voice” in full flower, McCartney attacked the song with driving gusto, his lyrics telling the heartrending story of a woman desperately attempting to provide sustenance for her growing brood. With its explicitly holy antecedent, Lady Madonna’s name paradoxically elevates the status of McCartney’s heroine, while calling the church’s capacity for engendering charity into question at the same time. As with “Eleanor Rigby,” “Lady Madonna” portrays a world in which, time and time again, an insensate society turns a blind eye to the suffering. No one is saved.

When it came to the musical accompaniment for his piercing lyrics, McCartney channeled the work of British trad jazz musician Humphrey Lyttelton. By this point, the notion of looting the musical past was a minor offense as far as the Beatles were concerned. “We were the biggest nickers in town,” Paul readily admitted. “Plagiarists extraordinaires.”

For “Lady Madonna,” McCartney’s piano boogie introduction owed a clear and obvious debt to Lyttelton’s “Bad Penny Blues,” which had been produced by the legendary Joe Meeks for Parlophone back in 1956 when Martin served as the label head. For Martin, the mere mention of Lyttelton’s name was understandably fraught with meaning.

In the early 1950s, when the producer was still getting his feet wet as Oscar Preuss’s assistant, Martin nearly succeeded in getting himself fired during a recording session with Lyttelton and his band. As the group rehearsed one of their latest numbers, young George felt himself becoming increasingly irritated by the bass player’s finger work, which, to Martin’s ears, sounded like a “dull thud.” Perhaps even worse yet, the young A&R man had the nerve to speak up, telling the bassist that he sounded like he was “playing with boxing gloves on.”

Hearing this remark, Martin later recalled, “Humph exploded. Calling me names of which I had not previously heard, he stomped out of the studio.” Not knowing what to do, George hurriedly located Preuss, who demanded that he find Lyttelton and apologize profusely. And that’s when the normally supportive head of Parlophone fed the bitter truth to his protégé. “If you lose us Humph, you’ve lost yourself your job,” Preuss told him.

In no time flat, Martin caught up with the jazzman huffing and puffing along Abbey Road. He managed to bring Lyttelton back into the fold, but the lesson had been once and truly learned. “Musically, I was right,” George reflected. “Diplomatically, I was wrong.” It would be an enduring philosophy that would serve him well across his career: “Tact is the sine qua non of being a record producer,” Martin wrote years later. “One has to tread a fine line between, on the one hand, submitting to an artist’s every whim, and on the other, throwing one’s own weight about.” Perhaps even more importantly, “I had to learn how to get my own way without letting the performer realize what was happening. One had to lead rather than drive.”

As Martin and the Beatles worked on “Lady Madonna” in February 1968, the producer enjoyed yet another chance to “lead” when McCartney announced that he wanted a sax solo for his hot new song. Without missing a beat, Martin rang up Laurie Gold, EMI’s session organizer, to arrange for a quartet of saxophonists. Up first was Harry Klein, a baritone sax player whom Gold roused from his bath for the session at Abbey Road that evening. Klein suggested that Gold hire Ronnie Scott, the London jazz club owner, to play tenor sax.

When Klein arrived at the studio, Martin’s sax quartet was set with Scott and Klein, along with baritone and tenor sax players Bill Jackman and Bill Povey. But as they strolled into the studio, the sax men were treated to the sight of empty music stands. As Klein recalled, “There was no written music but we played around with a few riffs until Paul liked what he heard. And then we recorded it — 101 times! I remember there was a big pile of meditation books in the corner of the studio, like the back room of a publisher’s office, and I also recall that they asked if we wanted a bite to eat. We were expecting a terrific meal but a few minutes later someone returned with pie and chips!”

As Martin looked on, McCartney followed the producer’s lead and began to drive. “There was not only no prepared music for us to follow,” Povey later reported, “but when Paul called out some chords at us our first reaction was to look at each other and say, ‘Well, who plays what?'” As Jackman recalled, “Paul went through the song on the piano and we were each given a scrap of manuscript paper and a pencil to write out some notes. Had there been music we would have been in and out in about 10 minutes. As it was, it took most of the evening, recording it in A-major pitch with the rhythm track playing in our headphones.”

PS. Ken is an internationally renowned Beatles authority whose books include Maximum Volume: The Life of Beatles Producer George Martin (The Early Years: 1926-1966), Long and Winding Roads: The Evolving Artistry of the Beatles and The Beatles Encyclopedia: Everything Fab Four. Click here to read his first CultureSonar post on “Paul Goresh and the Last Days of John Lennon.”

5 comments on “Everything Fab Four: The Beatles, Humphrey Lyttelton, and “Mountain Madonna””