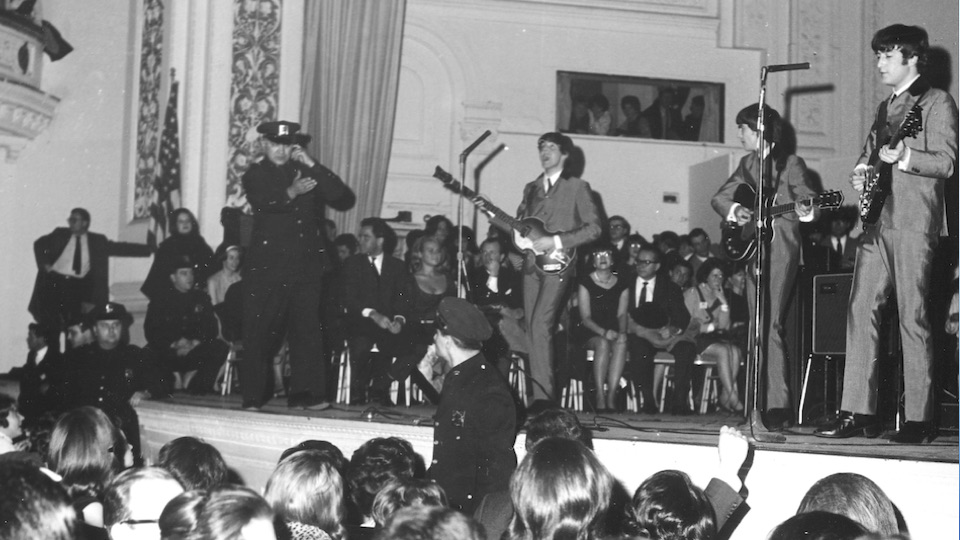 Editor’s Note: Sorry to interrupt, but — for the collector’s among you — we thought you’d like to know that we just got our hands on a few copies of several rare, out-of-print collector’s editions of three McCartney solo albums. They’re absolutely beautiful and, as collectors’s items, they are appreciating in value. Please have a look. When they’re gone, they’re gone forever.

Organized by famed promoter Sid Bernstein, the Beatles performed a pair of concerts at New York City’s celebrated Carnegie Hall on February 12, 1964. Having just returned from their appearance at Washington, DC’s Coliseum, the Beatles sold out both shows, for which the Briarwoods served as the supporting act.

The Beatles’ appearance at Carnegie Hall marked the first occasion in which a rock act played at the esteemed concert hall. Beatles producer George Martin had planned to record the concerts for a future live album, although he was denied permission, despite Capitol Records’ efforts, by the American Federation of Musicians.

The idea for recording a live album had materialized back on February 3rd, while Martin and the Beatles were still in England. Capitol fashioned a deal in which the Beatles’ producer would oversee the recordings with Voyle Gilmore, Capitol’s East Coast A&R (Artists & Repertoire) head. After securing permission from Carnegie to record on the premises with a pro-forma $600 fee, Capitol began making preparations to have a mobile unit on hand. But it was all for naught. Before Martin could so much as adjust a microphone, the American Federation of Musicians registered its objection to Martin’s participation, given that he would be acting as nonunion personnel on a recording session. While Capitol dutifully offered to cover the Englishman’s union dues, the union simply wasn’t willing to establish a precedent. As far as manager Brian Epstein and the band members were concerned, no Martin meant no Beatles. And with that the live album was kaput.

After the concerts, Bernstein attempted to book the Beatles for an appearance at Madison Square Garden during the following week for a $25,000 fee along with a $5,000 donation to the British Cancer Fund, although Epstein demurred with promises of a future engagement. As it turned out, the Beatles never played at the Garden, the famed venue where John Lennon would make his last performance before a paying audience with Elton John in November 1974 (Lennon’s final stage appearance occurred at a star-studded tribute to Sir Lew Grade in New York City in April 1975).

The Beatles’ performance at Carnegie Hall on February 12, 1964, also marked the last time that Bernstein booked a concert at the fabled venue. As Bernstein later recalled, “Carnegie Hall didn’t have to worry about its sacred property or paintings on the wall. They shook a little bit and they asked me never to come back again!”

As Lennon later recalled, the Beatles left the august hall with few, if any happy memories, in spite of the venue’s reputation. “Carnegie Hall was terrible!” he remembered. “The acoustics were terrible and they had all these people sitting on the stage with us and it was just like Rockefeller’s children backstage and it all got out of hand. It wasn’t a rock show; it was just a sort of circus where we were in cages. We were being pawed and talked at and met and touched, backstage and onstage. We were just like animals.”

“I Saw Her Standing There”

“I Wanna Be Your Man”

“Till There Was You”

“I Want to Hold Your Hand”

5 comments on “Everything Fab Four: The Beatles Live at Carnegie Hall!”