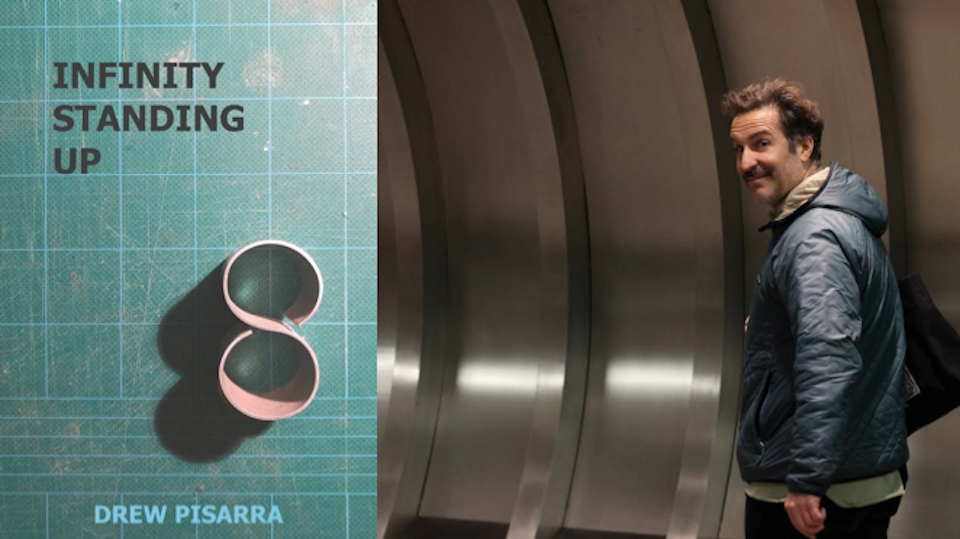 Take a talented playwright firmly entrenched in the 21st century who, while pondering his “questionably considered affair” with a man 15 years younger, writes a volume of poetry in a Shakespearean sonnet format. What does it yield? A charming book entitled Infinity Standing Up containing 40 different iambic pentameter-friendly odes to love gone right and – ultimately – wrong. It’s a slender book packed with humor and mathematics, pain and pleasure…with a winking acknowledgment of bitterness and wry, fond acceptance. It’s an obvious selection for poetry fanciers but will prove an accessible read for anyone. It is a witty discourse on the human condition.

According to author Drew Pisarra, he began this literary odyssey as a series of individual love sonnets sent to his inamorato, a professor in his 30s, both during the relationship and afterward (to varying reviews). “I wanted to show him that I loved him, so this seemed a logical thing to do. The first one didn’t impress him. And then the second one [Sonnet 11 pm, a tribute to sleepwear] he loved. Doing this every week or so galvanized me to keep going. When we parted ways the first time, I kept writing as a way to sort my feelings.” Some of the individually published sonnets came to the attention of Filipino-American poet and spoken word artist Regie Cabico, in the way that artists key into one another through the zeitgeist (and the internet). He owns a publishing company with leanings toward the LGBT mindset and inquired if Drew had enough poems to fill a book. In time, he did. And Infinity Standing Up became flesh.

The compelling title was Pisarra’s whittling down of the original “Eight is Just Infinity Standing Up.” Eight is an intriguing figure to him and a recurring theme throughout the book. “Eight stands for infinity standing on its end, which I love, and all the titles of each section’s opening sonnet in some way contain an 8.” It even riffs off the first powerful poem [Sonnet 8], which references wanting to be eaten, devoured, consumed and, shall we say, passed through the intestines of his professor friend, so in this case, 8 = “ate.” Pisarra is committed to the imagery!

The sonnets are laid out in a somewhat theatrical format, acknowledging the (melo)drama that was rife throughout the affair. Pisarra states in his own piece in onstageblog.com: “Because of that, Infinity Standing Up is literally laid out in acts: Act I, Act 2, Act 2a, Act II and Act IV, a nod to the theatrical idiosyncrasies of Gertrude Stein because I could not envision an Act 3 with this person and the middle of the affair proved maddeningly repetitive.” The inherent poignancy of this is tempered with quirk and humor; the sonnets are loosely chronological but are not enumerated as such. There’s a Sonnet 69, Sonnet 666, Sonnet1-800, Sonnet 8X10 (a headshot image plaintively bringing the author back to his emotionally loaded childhood), Sonnet 917-589-9XXX and many other clever titles that clue the reader into the world encapsulated by that particular sonnet and keep the pace vibrant and dynamic.

Some bitterness is touchingly in evidence: In Sonnet 32[degrees], he says:

“I’ll be the first to admit I’m cold. Yet the truth
of the matter is this: You grow bored when I’m nice.
You’re quite aroused by a standoffish attitude.
You get your rocks off by chewing Freudian ice.”

Ouch! And In Sonnet 13, the number references the sheer unluckiness of the situation. Every line ends in a hyphen, invoking the jarring disconnection during an argument where one was suffering mightily and the other stares out the window at the stars, utterly detached.

Infinity Standing Up can be read in one uninterrupted stream for the full sweep, but it can also be enjoyed piecemeal as individual shots of wit and wisdom. Pisarra found the iambic pentameter format particularly user-friendly; the working definition is “a line of verse with five metrical feet, each consisting of one short (or unstressed) syllable followed by one long (or stressed) syllable.” Turns out that this is actually how humans generally speak, so Pisarra embraced a format where he could just communicate his thoughts in an organic way.

The individual sonnets run the gamut of fond, frustrated, romantic, phallic, whimsical and wistful. So many aspects of the human experience are celebrated and mourned from this one relationship that may have ended but have left behind the tangible gift of a wonderful book that many will enjoy. Pisarra’s ex told him at one point “I am not a muse.” His response? “You have no choice.” How true, and how fortunate for everyone who will be moved and inspired by the earthly erstwhile romance of Infinity Standing Up.

Photo Credit: Image of Drew Pisarra by Linda Manning courtesy of the photographer.

2 comments on “The Bard Meets a Bloke from Brooklyn”