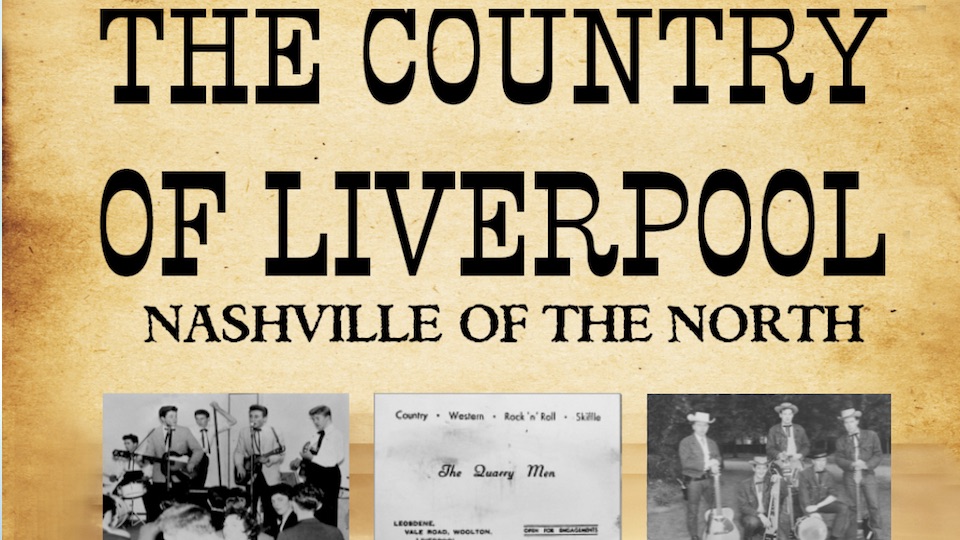 For 50 years, the well-worn tale of 1950s American music imported into the port city of Liverpool, England, via the Cunard Yanks has been the standard explanation for the “rise of the Beatles.” But in his new book, The Country of Liverpool, author David Bedford (Liddypool, The Fab One Hundred and Four) views this simplistic theory as a bit like putting the cart in front of the horse.

The earliest immigrants from Britain to the American colonies, Bedford tells us, brought with them folk songs, hymns, and primitive African blues. And these strains, “telling stories of love, war, legends, and explorations…were written with a regular rhythm and meter” that helped generations remember and repeat them easily. Settling in American’s Appalachian Mountain region, these Scottish, Irish, and English settlers, Bedford says, bequeathed their unique music to their new country, giving the colonies songs such as “Pretty Polly” (English) and “Cumberland Gap” (a Scottish tune, sung much later by John Lennon’s Quarry Men). In essence, Bedford asserts, the first British settlers gave America the formative sounds that developed into Country and Western music.

From this eye-opening thesis, Bedford begins to trace the diverse threads of musical movements that interwove, transmuted, and evolved into the burgeoning American “Country and Western” genre. He examines each different “school of sound,” recounting where it was born, how it evolved, and how it impacted 1950s skiffle and later, Rock’n’Roll in the early days of what was fondly dubbed “The British Invasion.”

First, Bedford provides a concise history of Country and Western music from Jimmie Rogers to the birth of the Grand Ole Opry to “the singing cowboys” (Roy Rogers and Gene Autry) to the advent of boogie-woogie and bluegrass to that seminal moment when Hank Williams penned the song that effectively kicked off Rock’n’Roll, “Move it On Over.” Bedford asserts that “…in ‘Move it On Over,’ you can almost hear Chuck Berry’s ‘Roll Over Beethoven’” And he says, “…is it any wonder that John Lennon…and many of the Liverpool musicians were inspired by [Hank] Williams?”

Even rock giant, Elvis Presley, Bedford says, was so strongly swathed in a Country and Western background that he was initially labeled “The Hillbilly Cat.” And in a line of “direct descent” to The British Invasion, Presley inspired young John Lennon to take up the guitar and form his first skiffle group.

But even more important to the Liverpool connection between Country and Western music and Rock’n’Roll, Bedford says, was the Texas boy with the dark glasses, Buddy Holly. “For Liverpool musicians,” Bedford comments, “Buddy Holly was the hero.” Indeed, Bedford points out, “…his group The Crickets led to Lennon’s group being [named] The Beatles.” Holly performed in Liverpool in 1958, and though none of The Beatles saw this landmark show, the impact was felt all over the city as skiffle groups (including Lennon’s Quarry Men) widely adopted the Holly Sound.

The interweaving between America’s and Merseyside’s musical heritage, Bedford tells us, is astounding. In a complex “chicken-or-the-egg” scenario, each country influenced the other, with the military playing a significant role in the story. During the 1950s and early 60s, the port of Liverpool teemed with American sailors, and from 1941-1993, American GIs were stationed at the Burtonwood Air Base, just miles from Liverpool. These men (and women) took home to America the rich sounds of Merseyside clubs and bands, just as they had imported to Liverpool their personal records bearing the sounds of New York City, Nashville, and Detroit.

But music was not the only common denominator that Country and Western fans in Liverpool shared with their American counterparts. They also shared a common passion for cowboys, Western movies, and “shoot-em-up” television programs. Bedford reminds us that James Dean “donned a Stetson in Giant,” Elvis “went cowboy in Love Me Tender,” and Richard Starkey — who once applied for a job as a Texas cowboy — selected his famous moniker from the cowboy character, Johnny Ringo, in Gunfight at the O.K. Corral.

Then, something incredible happened. The machismo of the frontier cowboy was absorbed into the emerging character of the Liverpool rocker. For example, the Merseyside group, Alan Caldwell and the Raving Texans, slowly transformed into Rory Storm and the Hurricanes. Cowboy fan, Paul McCartney, astoundingly “missed ‘Wild Bill Hickock’ on TV to watch The Quarry Men perform at the Woolton Garden Fete,” relinquishing time with his cowboy hero to get his first glimpse of what would become The Beatles. The Mersey Sound had incorporated Country and Western sound, its image, and its hero within a broader scope. By 1960, Bedford says, the old, traditional western genre was “done and dusted.”

That is not to say that Country and Western music disappeared from Merseyside. Widely recognized as the “Nashville of the North,” Liverpool did continue to produce many changing and emerging Country and Western groups with a fresh, new sound. Bedford lists hundreds of them, providing a second extensive list of their Merseyside venues. From Allan Williams’s (The Beatles’ first manager) Blue Angel Club to The Morgue (formerly the Morgue Skiffle Cellar where George Harrison first performed with The Beatles in March 1958), these haunts nurtured Liverpool’s unique blend of Folk, Irish, and Country music, gently painted with the sounds of Rock’n’Roll as well.

And stars began to rise from this Northern British form of Country and Western music. Billy Butler, the Emcee of the BBC program “Sounds of Country” made a name for himself as did the Father of Country Music in Liverpool, Hank Walters. Bedford tells their stories and enhances each with rare photographs, cartoons, advertisements, and newspaper articles. He also carefully conveys the complete story of Skiffle, that unique music that birthed The Beatles, from its earliest hits by Lonnie Donegan to the Cavern Club’s popular Chas McDevitt.

Giving a lively account of The Beatles’ own genesis from Skiffle, Bedford follows John Lennon’s evolving band from two of their first songs, “Rock Island Line” and “Putting on the Style,” to George Harrison’s official audition song for the group, “Raunchy,” to Paul McCartney’s famous Country and Western show stopper, “That’s Alright Mama.”

Bedford shows that as The Beatles matured, they carried the sounds of Country and Western and Skiffle right along with them. On their BBC shows, they performed Carl Perkins’s “Sure to Fall.” And as late as 1965, the boys were performing an original Country and Western waltz, “Baby’s in Black” as well as including “What Goes On” on Rubber Soul. Similarly, Bedford adroitly points out that American Country and Western artists were covering The Beatles’ original tunes. Tanya Tucker had a hit with “Something.” Rosanne Cash went to Number One with “I Don’t Want to Spoil the Party” and Randy Travis scored with “Nowhere Man.” The links are many.

Finally, Bedford lovingly shares the charming story of one special American city in Northeast Arkansas whose roots lie deep in Country and Western music, but whose interaction with The Beatles in September of 1964 ultimately saved their town. The unique history and story of Walnut Ridge, Arkansas (who now hosts the very successful “Beatles at the Ridge” Festival each September), is not to be missed. Bedford paints this portrait via the eyes of Carrie Mae Snapp who was there on the day that The Beatles landed in Walnut Ridge, and her rare photos help trace the link between two cities and two music genres that joined forces for a greater good.

The Country of Liverpool is an exhaustive work linking Country and Western and Rock’n’Roll, between America and Liverpool. Bedford’s book proves that long before The Beatles set foot on the Ed Sullivan Stage on 9 February 1964, the United States and Liverpool were already joined by a common love affair with Irish-inspired Bluegrass, Folk, Skiffle, and Country and Western, all of which led directly to the birth of Rock’n’Roll and the Mersey Beat.

This is that complete story.