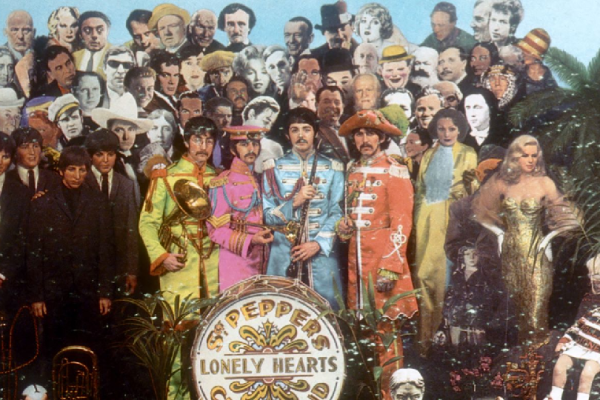 March 30, 1967:  The Beatles are in a photographer’s studio shooting the cover art for Sgt. Pepper’s Lonely Heart’s Club Band. We revisit the making of this iconic album cover, courtesy of Scott Freiman who leads our “Deconstructing the Beatles” series.

It’s one of the most famous album covers ever produced — The Beatles’ Sgt. Pepper’s Lonely Hearts Club Band. On the cover of this 1967 masterpiece, the Beatles stand in front of a Sgt. Pepper bass drum dressed in colorful costumes. They are holding brass and woodwind instruments and are surrounded by images of other celebrities, flower formations, and other assorted objects, including wax figures of their earlier selves. New information has recently surfaced that may reveal the inspiration for this memorable album cover.

Back in 1966, the Beatles had decided to give up touring and become a studio-only band. This was an extremely risky move for the Beatles since no successful band had ever given up touring. When the Beatles entered the studio in November of 1966 to begin work on their first post-touring album, they already had several incredible songs written, including “Strawberry Fields Forever” and “Penny Lane.” But, with no new Beatles release imminent, their manager Brian Epstein and producer George Martin decided to release the two songs as a single and leave them off the next album.

With the two songs “lost” from the album, Paul McCartney conceived of a concept that could inspire the Beatles in composing new material. The idea was that the Beatles would “pose” as another band — Sgt. Pepper’s Lonely Hearts Club Band. This would allow the Beatles to write in any style they wished without being “hindered” by their audience’s expectations. Although this concept really didn’t hold for all the songs on Sgt. Pepper, the album did have the Beatles easily swapping styles — from the circus music of “Being for the Benefit of Mr. Kite” to the Eastern-influenced “Within You, Without You” to the classical strings of “She’s Leaving Home.”

An ambitious album like Sgt. Pepper required equally ambitious cover art. Apparently, the design was McCartney’s idea, and he enlisted the artists Peter Blake, Robert Fraser, and Jann Haworth to realize his vision based on a drawing McCartney had made. The artists created cardboard cutouts of famous people chosen by the four Beatles and positioned them behind the Beatles for the final photograph. Until recently, many Beatles historians thought the inspiration for the cover was a picture taken of Paul’s father Jim and his band, the Jim Mac Band.

However, a recent revelation by a Swedish record dealer, Jorgen Johansson calls this theory into question. Johansson uncovered a 1964 EP by the group Mercblecket, a group of students from the Stockholm School of Economics who recorded parodies of four Beatles songs. That cover, like Sgt. Pepper, features the band gathered around a bass drum:

A photo of a marching band gathered around a bass drum is not in itself unusual. But, as it turns out, this particular album had been presented by Mercblecket to McCartney when the Beatles visited Stockholm in 1964. You can see a video of the band performing for the Beatles when they arrived in Stockholm (at 0:27, that’s Mercblecket’s Roger Wallis joking with McCartney):

There is even an interview in a Swedish hotel where the Beatles are listening to the Mercblecket EP. “I really like this one,” says McCartney. “They really got the beat. It’s really great!” So, did Mercblecket inspire the Sgt. Pepper cover? It’s certainly plausible that it was one of the inspirations for the cover. But until Sir Paul comments on this story, we’ll just chalk it up to another Beatles mystery.

9 comments on “How “Sgt. Pepper” Got Its Cover”