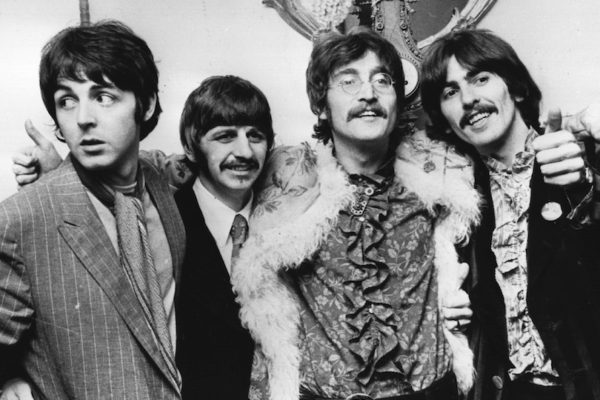 In the 1960s, Beatles fans were taken on a ticket to ride that’s continued long past that January day in 1969, when they stepped onto the chilly roof of Apple Corp’s London headquarters to play their very last concert together. This was a band that truly defined a decade (and then some) via songs that both changed pop music and dominated the charts. As to that latter part, you can see just how ubiquitous the Fab Four were on the radio by looking at the top ten Number One singles the band released. These are their songs that had the longest staying power in the Number One slot, according to the Billboard Hot 100 Chart. (Songs which stayed at the top for the same number of weeks were then ranked based on how long they stayed on the chart overall.)

10. “Let it Be” (1970) (Two weeks at Number 1)
“When I find myself in times of trouble / Mother Mary comes to me / Speaking words of wisdom / Let it be.” As you might guess from those unforgettable lyrics, this song was born out of tumultuous times. As Paul struggled to keep the band together while recording The White Album, he had a dream in which his late mother, Mary, comforted him by telling him things were going to be alright. Sadly, she was only partly right as the song was the last Beatles tune released before the band split. It peaked at Number One in April 1970, replacing “Bridge Over Troubled Water” by Simon & Garfunkel, a duo that had its own inner tensions.

9. “She Loves You” (1964) (Two weeks at Number 1)
This rocker captures the essence of early Beatlemania, and has been credited for launching the Fab Four into superstardom in England. (It’s actually the best-selling Beatles single in the UK.) Interestingly, “She Loves You” followed “I Want To Hold Your Hand” to the top of the Billboard Hot 100 chart in the US, despite being released first. Fortunately, the bandmates laughed off Paul’s Dad when he suggested that they change the chorus of “yeah, yeah, yeah” to “yes, yes, yes.”

[amazon template=right aligned image&asin=B01576X5DK]8. Help! (1965) (Three weeks at Number 1)
Despite John playfully referring to this one as just another example of “electronic noise,” the song climbed to the top of the charts in the UK and the US, knocking out the Sonny and Cher classic, “I Got You Babe.” “Help!” was conceived and mostly written by John as a title song to the movie. Years later in the book All We Were Saying, John remarked that it was actually an example of his own “fat Elvis period.”

7. “We Can Work It Out” (1966) (Three weeks at Number 1)
Recorded for Rubber Soul, “We Can Work It Out” exemplifies how two contrasting sensibilities meshed to make magic with the lyrics. As John noted in Playboy: “You’ve got Paul writing, ‘We can work it out / we can work it out’ – real optimistic, y’know, and me, impatient: ‘Life is very short, and there’s no time for fussing and fighting, my friend.” The song is also notable for John’s use of the harmonium which, legend has it, someone found lying around in the studio. Side note: “Day Tripper” was originally intended to be the band’s last single of 1965 but after an intense back-and-forth with manager Brian Epstein, they released a double A-side 45 instead.

6. “Hello, Goodbye” (1967) (Three weeks at Number 1)
1967 was the “Summer of Love” during which the Beatles said “goodbye” to matching suits, and “hello” to peace, love and a little LSD. And while the film associated with the LP The Magical Mystery Tour may still get mixed reviews, the album itself is filled with winners. That said, none of them stayed at the very top as long as “Hello, Goodbye” — not “Penny Lane,” not “I Am the Walrus,” not “Strawberry Fields Forever.” Ironically, “Hello Goodbye” earned the premiere spot for three weeks after knocking out “Daydream Believer” by The Monkees — TV’s beloved Prefab Four modeled after The Beatles.

5. Yesterday (1965) (Four weeks at Number 1)
Beatles fans believe in “Yesterday, perhaps even more than Paul and the band did. The Beatles never released it as a single in England, and Paul has been quoted as saying they were concerned the beautiful ballad, with string arrangements might take away from their image as a “rock ‘n’ roll band.” After it’s inclusion on the Help! album, the song became a hit on the Billboard charts, knocking off the catchy “Hang On Sloopy,” by the McCoys. “Yesterday” is still the most covered song of all-time and its theme of lost love resonates every time you listen to it. Beatles fans can only wonder what the song would’ve sounded like if the working title, “Scrambled Eggs,” had been recorded instead. That song may have fit in better on the Magical Mystery Tour album

4. “Get Back” (1969) (Five weeks at Number 1)
This song was a return to a more-stripped down sound that John quipped was, “The Beatles as nature intended.” For hardcore fans, it will always be remembered as the one that closed out their famous rooftop concert and marked the end of a musical era. Featuring Billy Preston on keyboards, the original version was produced by Phil Spector but Paul McCartney offered his own version of how he thought it should sound on Let It Be…Naked. Pick your favorite.

3. “Can’t Buy Me Love” (1964) (Five weeks at Number 1)
Featured on the soundtrack of A Hard Day’s Night, “Can’t Buy Me Love” was recorded shortly before the Fab Four’s appearance on The Ed Sullivan Show. By the time it was officially released, the band had reached a new stratosphere of popularity. The song set a number of records when it hit Number One, perhaps most impressively that the Beatles owned all of the top five songs on the chart. Fun fact: A portion of Ringo’s hi-hat cymbal work was over-dubbed by studio engineer Norman Smith after a tape defect was noticed after the Beatles had left the studio.

2. “I Want to Hold Your Hand” (1964) (Seven weeks at Number 1)
Feb. 9, 1964 is the day The Beatles invaded America through their TV screens with this song on The Ed Sullivan Show. Beatles manager Brian Epstein had previously stated he wanted the group to have a Number One hit stateside before they toured the US. This was it. The song replaced “There, I’ve Said it Again” by Bobby Vinton and remained Number One for seven weeks. Remarkable? Yes. But then there’s…

1. “Hey Jude” (1968) (Nine weeks at Number 1)
This 7’ 11” epic topped Billboard’s 100 chart for a record nine weeks — replacing the gimmicky “Harper Valley PTA” in the process. The promotional video The Beatles made for this song was the closest thing to a live concert the band had performed in two years. As most Fab Four fans know, Paul conceived “Hey Jude” as a way to console the 5-year-old Julian Lennon about his parent’s divorce. This wasn’t their last Number One hit – see items four and ten above – but it was arguably their most massive, staying as it did in the top spot for nine weeks.

PS. Ron Howard’s 8 Days A Week documentary on the group is well worth seeing — as are these five films by the Beatles (again).