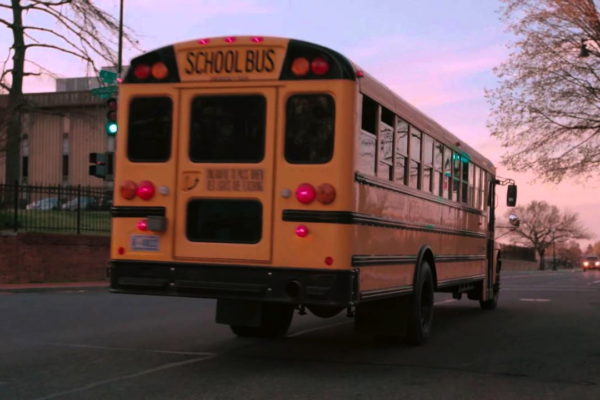 The global advertising community gathers annually in Cannes for a festival of advertising creativity – and occasional Dionysian revelry. With hundreds of thousands of entries, winning a gold medal is the toughest of any competition anywhere. But the winners are inevitably ground-breaking and inspiring. Inspiration was Lockheed‘s goal when it asked its creative resources, led by McCann, to create the world’s first mobile group Virtual Reality experience. As one creator notes, VR now is essentially a private, isolating experience. But wouldn’t it be cool to give a busload of people the same, simultaneous VR experience? And then — just to make it really challenging — put the whole thing on wheels?

Field Trip to Mars is the barrier-shattering outcome of this ambitious mission.

A conventional school bus in Washington DC was kitted out with windows that transform from conventional glass to VR screens. School kids, thinking they were headed for an ordinary field trip, boarded Lockheed’s magic bus and began their journey gazing at passing DC neighborhoods. But within minutes they were suddenly looking at the surface of a future planet Mars – virtually surrounding their bus. Transfixed – and who wouldn’t be? – they gleefully travel through a VR Martian landscape Even more incredibly, when the bus turns on earth it also turns on Mars; when it slows down in Washington, it brakes on the red planet as well; and when it hits a Capital pothole it traverses a bump on Mars.

The kids are ecstatic, with one noting that someone his age now will probably be the first person to walk on Mars. Lockheed and its creative partners should be ecstatic as well. While a gold medal at Cannes (awarded over the summer) is well worth the effort, the bigger reward here is inspiring our youngest generation to dream greatly.

We can’t re-create the on-bus experience here but this 2-minute film explains it and you’ll get a sense of the amazing effects.

If you’d like to get further into the ground-breaking creative technology, here’s a Making Of video that’ll cause your jaw to drop further (less gravity on Mars…). Among other things, the team developed entirely new technologies and mapped every street in the District to a location on Mars.

PS. You may also enjoy Steve’s other posts about advertising, virtual reality, and some other amazing technology: A Virtual Escape,  A Powerful Way to Share the World and Australia’s Brilliance in 360 Degrees. And for a visit to the Red Planet care of radio, check out Out of This World: The Martian Chronicles on Radio.

0 comments on “A School Bus, Virtual Reality, and an Out-of-This-World Journey”