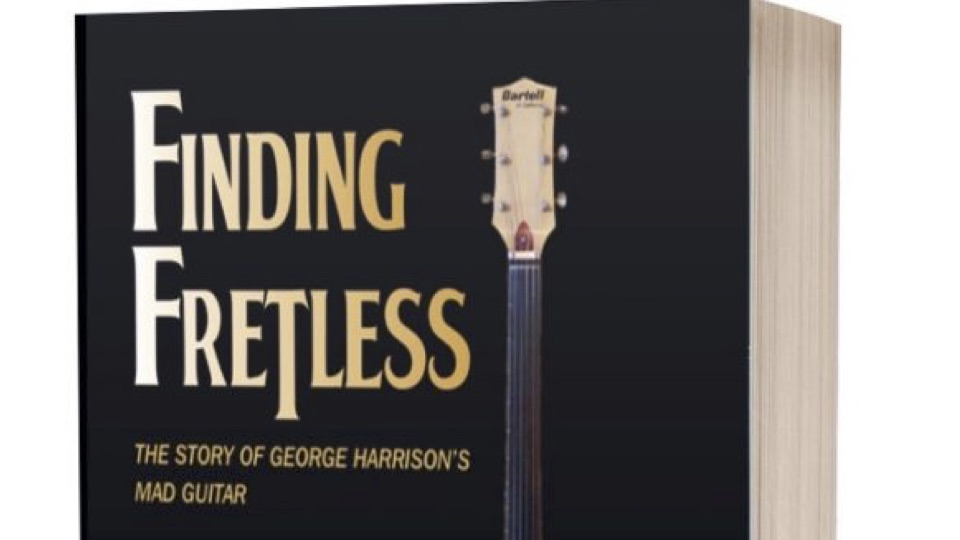 John Lennon and George Harrison enjoyed many pursuits — singing, meditating, holidaying– but ever the professionals, they happily brought their passion for Fender guitars into the studio with them. It’s estimated that The Beatles used Fenders all over The White Album, from the yearning, dreamlike “Happiness Is A Warm Gun” to the turbocharged, proto-punk rocker “Helter Skelter.” Harrison referred to the instrument as the “mad guitar” but the results–frequently beautiful, always startling — helped typify the lexicon of the modern rock idiom. But they also loved a variation on the instrument, the Bartell guitar.

And that’s exactly what Paul Brett searches for on Finding Fretless: The Story of George Harrison’s Mad Guitar, a genuine labor of love for a truly remarkable instrument. What’s most astonishing about the research isn’t the passion that went into the work, but the malleability that the instrument holds. Red Hot Chilli Peppers frontman John Frusciante used one –albeit infrequently — more a reflection of its difficult tuning than a preferred guitar model. The Irish-born Rory Gallagher likely purchased his guitar touring America in the 70s. John Paul Jones, meanwhile, claims he doesn’t remember using a fretless bass – but then again, why would he? Led Zeppelin played a lot of gigs!

It wasn’t necessarily easy to recognize a fretless guitar: it took a trained ear to realize what the bends, bars, and frills were, but Harrison was one such musician. In one of the book’s more impressive sections, the writers discovered Harrison’s Bartell fretless amongst the many acoustic guitars in a photograph. During the recording of Water-one of Handmade Film’s patchier efforts – Harrison handed his Bartell to Ray Russell, another musician of high repute. He’s seen holding the instrument on page 121, clearly still wowed by the possession in his hands. Tellingly, the instrument proved more “Beatle George” than “solo George,” a fact Dr. Jan Gorski-Mescir makes plain; “…Given to them in late ’67, a fretless guitar, which saw use on the White Album the following year, notably on ‘Happiness is a Warm Gun’ and ‘Helter Skelter.’ After that, it just hung around.”

As it happens, Harrison –perhaps sensitive to his own guitar playing, after dedicating years to the sitar — was showing a predilection for the slide. From that moment on, bottle-neck solos were an integral part of his wheelhouse, and he even performed the lacerating “Free As A Bird” break on a slide.

But that didn’t stop public interest from gathering around the Bartell, and on March 2020, it was confirmed that the BBC’s Antiques Roadshow had the instrument on display. “A rare John Lennon and George Harrison-owned fretless guitar just surfaced – and it’s worth over $500,000,” Guitar World boasted, while the more buoyant NME said, “Got a bit of spare cash knocking around? The Beatles: ‘Antiques Roadshow’ value guitar once owned by John Lennon and George Harrison at £400k The current owner said he was given the guitar because he could play it better than Harrison.”

Finding Fretless is an essential buy for guitar lovers, whether it’s to enjoy the lavish photographs or to envy the many luminaries who have tried out the instrument. And although the book will be marketed to Beatle fans, the book also doubles as a tribute to Bartell founders Paul Barth & Ted Peckels. Without their passion for music, we may never have had the angular riffs that centered Beatles’ masterwork “Happiness Is A Warm Gun”, nor would we have a selection of guitars that can hold up with the best of rock’s musical output.

6 comments on ““Finding Fretless”: The Search for a Beatle Guitar”