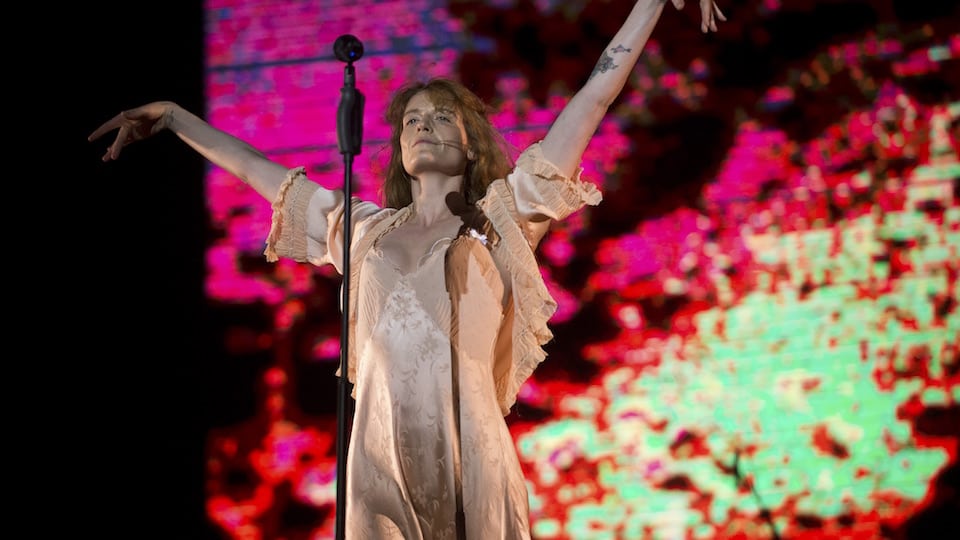 With the recent release of their fourth album, one group in particular has continued to make a convincing case for themselves as the music world’s Artists of a Generation: Florence + the Machine. This band has been making waves since their debut album Lungs (2009) which — with the big help of its lead single “Dog Days Are Over” — emphatically put the group on the map.

What quickly separated them from their contemporaries is their electrifying lead singer Florence Welch, easily one of this era’s most colorful and talented personalities, a singer whose powerhouse vocal performances and unique musical style have warranted her such unusual accolades as “the most peculiar and most highly acclaimed female singer of the moment” by The Sunday Times. And now with a substantial discography to her credit, it’s clear that her ascendancy isn’t just a passing phase.

Related: “Give Connie Francis Some Respect…Really”

Although extremely shy and bashful on the surface, Welch possesses a genuinely defiant character beneath her extravagant bohemian drapery. Her distinct sound, rooted in passion, may be heavily influenced by the likes of Grace Slick, Kate Bush, and Stevie Nicks but it also reveals unique qualities as well, including a fervent approach lyrically and stylistically that exhibits incredible control over pitch, vibrato, and even vigor.

After quickly gaining traction with Lungs, Florence and company’s follow-up (Ceremonials) took them even higher with one of 2011’s biggest hits “Shake It Out” thereby cementing Welch as the one-to-watch on the indie scene. That sustained success, however, proved to be a bit too much for Welch whose subsequent issues with alcohol ended up affecting her mentally and productivity-wise. As a result, she made the bold move of taking a one-year hiatus to focus on self-care. It was a wise choice. A realigned Welch eventually emerged sober and more focused than ever and delivered her first-ever Number One album: How Big How Blue How Beautiful. Critics and fans alike lauded the new incarnation of the group as the album found itself nominated for five Grammys. Some went so far as to say that this new LP was one of the decade’s finest works. Consequence of Sound certainly echoed that sentiment by noting that Welch had “reached a new level of eloquence in her writing, making her a more complete artist than ever.”

The group’s latest release High as Hope makes a clear statement that this band has what every artist yearns for now: Longevity. Four albums in, Florence + the Machine is still taking risks; in this case, they’ve traded in the resplendent orchestration of earlier years in favor of a stripped-down sound designed to highlight the subtleties of Welch’s vocals. And it works. High as Hope is easily the group’s most vulnerable and intimate offering yet. Furthermore, the album has garnered positive reviews while also spawning the hit single “Hunger” and earning a nomination for Mercury Prize’s “Album of the Year” award.

Related: “No Pretense: The Pretenders 2018 Tour”

Unsurprisingly, Florence + the Machine are currently finding themselves dominating 2018’s music festival circuit which bodes well for their impending (and first) arena tour which launches in September. The future looks wide open for this band that shows no signs of slowing down. And with a creative force such as Florence Welch securely at the helm, we can only expect great things in the future. In ten years we will inevitably canonize Florence Welch as one of the greats. But why wait? Be here now and honor Florence + The Machine in their prime.

Photo: Florence Welch of Florence and the Machine performs on stage during BBK Live Festival at Kobetamendi on July 12, 2018 in Bilbao, Spain. (Photo by Jordi Vidal/Redferns/Getty)

0 comments on “Florence + the Machine: The Millennial Rock Band”