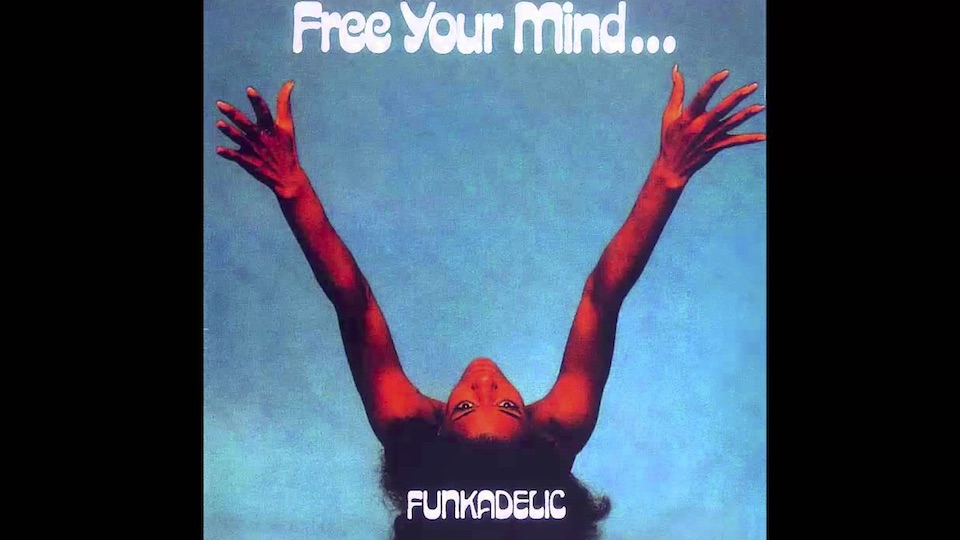 The concepts of Funk and freedom are not mutually exclusive. One can easily exhibit and embrace the characteristics of the other. Freedom can be Funky and Funk, as James Brown/P-Funk trombonist Fred Wesley noted, “Funk is freedom.” Both concepts collided in the second half of 1970 when Funkadelic released their sophomore release Free Your Mind… on Westbound Records. Unlike their auspicious debut in late January, Free Your Mind features the core band, but with two new additions: keyboardist Bernie Worrell would replace Mickey Atkins and Tal Ross, who originally was supposed to handle bass chores, moved to rhythm guitar when Billy Bass Nelson returned after a short absence.

Also unlike its predecessor, Free Your Mind also takes a sharp detour into an underground musical universe patterned after Hendrix, as well as the MC5 and Iggy Pop who were pivotal figures of Michigan’s acid rock/punk scene. All three bands would share the bill on numerous gigs in 1970 and ’71 that embraced the ever-bourgeoning Free Jazz movement defined by Ornette Coleman and Sun Ra. Never one to skirt controversy, the inside cover of Free Your Mind features a naked African American woman with her arms extended into the universe. An attention grabber in both the title and cover image, Free Your Mind defines shock value even before the needle is placed on the record.

Opening with a psychedelic Funk freakout that would make Frank Zappa head in the opposite direction, the title cut is both scary and fascinating. George Clinton and various members of Funkadelic take turns giving the listener the impression that they’re trapped in an acid-induced trip. Eddie Hazel’s piercing guitar along with Bernie Worrell’s eerie-sounding keyboards take this track into one of the darkest spaces Funkadelic has ever ventured into. The title endured well into the 1990s, being transformed (and sanitized) by En Vogue on their 1992 hit single “Free Your Mind.”

Originating in 1969 and performed on the PBS Boston-based TV series Say Brother in July of that year, “Friday Night, August 14th” features Billy Bass Nelson and Eddie Hazel on lead vocals, as well as members of Isaac Hayes’ band who were featured on his Hot Buttered Soul project.

Basically lending itself (at least partially) to a country/western approach, this track features rhythm guitarist Tal (Tawl) Ross on lead vocal. The track was reportedly inspired by the observations of Parliament’s vocalist Ray Davis seeing other band members in drug-induced despair in the studio. This track was also released as the B-side to the single “You and Your Folks, Me and My Folks” in 1971.

I WANNA KNOW IF IT’S GOOD TO YOU

The only track on the album to be released as a single, I Wanna Know features lead vocals by Eddie Hazel and Billy Bass Nelson. The single peaked at number 27 on the Billboard R&B singles charts. The lyrics proved to be so enduring, that it was used almost word for word in the 1980 track “Semi First Class Seat” by former P-Funk drummer Jerome Brailey and his band Mutiny.

A warped take on Southern blues, Some More reuses the lyrics of a 1966 single “Headache In My Heart” by the Detroit-based girl group the Debonairs. The seemingly deranged lead vocals are handled by George Clinton, who also wrote the original Debonairs track.

Following the lead of the Beatles “Revolution #9”, the closing track to Free Your Mind is defined by George Clinton’s “hood” interpretation of the Lord’s Prayer and the 23rd Psalm, set against the backdrop of Funkadelic’s “Open Our Eyes” run backward. Clinton runs down a dismal, bleak and dark description of American urban life.

Added as a CD bonus track when the album was reissued in 2005, “Fish, Chips & Sweat” first appeared as the B-side to the Funkadelic single “I Got A Thing, You Got A Thing, Everybody’s Got A Thing.” The Sly Stone influenced track is actually a reworking of the 1966 single “Baby, That’s A Groove” by Newark, NJ-based singer Roy Handy, co-written by Clinton.

Free Your Mind charted in Billboard magazine in November of 1970 and peaked at number 11 on the R&B album chart and number 92 on the Top 200 album chart.  The title of the album has endured as a slogan for Funkateers more than the actual track itself. Free Your Mind would help to establish the musical and conceptual aesthetic of Funkadelic for at least the next six years.