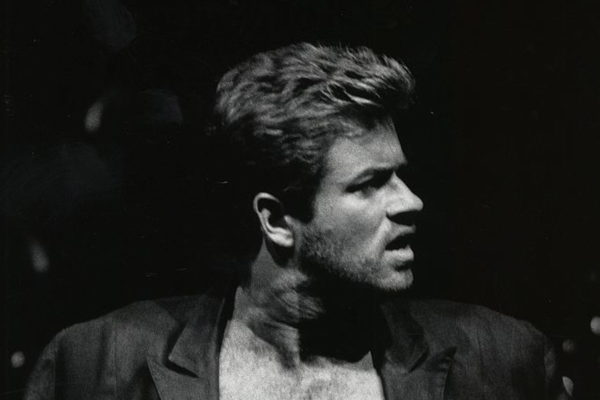 George Michael died on December 25, 2016, at his home in England. Writer Eric Diesel recalls the pop singer’s effect on both his music collection and his life.

When George Michael’s Symphonica dropped just a couple of years ago, it felt like a rebirth of some proportion and some time coming. For an artist who presented in superlatives — in his way more Streisand than Streisand, right down to the manicure — George didn’t always receive the recognition he merited as a musician yet Symphonica was, and is, a solid record whose thesis is that the music was always what mattered and whose untouchable execution proves the thesis with assurance. Everyone from Michael Bublé to the Puppini Sisters records pop covers in a commercial way that’s traceable to the pastiches of Bette Midler and the Manhattan Transfer. But rarely do pop artists present a repertoire as a symphonic concert. Only the most royal of divas can make that work. And Symphonica goes there and gets it right, without ever meandering into Boston Pops territory. Symphonica is serious and musical and lush and right.

There are those for whom Symphonica was weighty, even grave. For some, the orchestral treatment of pop songs renders pop professorial, and they equate that to a betrayal. I won’t argue with them, but I also don’t agree. Because it goes back to the material, girl. Perhaps because the pop hits got so frothy, George always tempered the ballads with an often cathedral-like seriousness. The symphony hall is the proper setting that “A Different Corner” was always waiting for, and it is in this context that the song finally sounds right.

The minute I write “the music mattered” or words to that effect, I am entering the territory of the pop diva’s core artistic struggle. From Gaga’s shattered chandeliers to Sade’s diamond life, there is always the wary watchfulness for style to subsume substance. A special area of this criticism is reserved for artists who came of age in the ’80s. In the day, due to the kinetic gloss of MTV and, let’s admit it, a high percentage of junk, artists struggled a little bit harder to be taken seriously, often on a sliding scale with sales, airplay, and video screen-time.

George is in the august company of MTV’s first generation of royalty, most of them established now if not all of them beyond reproach. Audiences connected with Madonna’s wickedness and her style, but does anyone remember how hard the now Rock and Roll Hall-of-Famer worked to be taken seriously? Morrissey published his autobiography as a Penguin Classic, placing him, not inappropriately, in the sights of English majors haunting the stacks at the university bookstore. That’s as earnest and tongue-in-cheek a gesture as we’d expect from The Pommaded One. As for Annie Lennox and Dave Stewart, they’re winning Oscars and producing career-capping platters for their own rock royalty respectively.

Artists who came of musical age in the ’80s brought a lot of us along with them. As a gay boy in the small-town southwest followed by being a college guy in the small-town middle Atlantic, I was in a cultural atmosphere that spoke nothing to my identity. But then George Michael appeared on my TV while wearing short shorts — if it’s stereotypical, so be — and I connected. “Wake Me Up Before You Go Go” is one of the most overplayed songs of that decade, but it only seems counter-intuitive to equate bubble gum rock with liberation if you’ve never really listened to Lesley Gore. While we rightly revere the feminist anthem that was Cyndi Lauper’s “Girls Just Want to Have Fun,” we don’t as readily acknowledge that “Wake Me Up…” was the gay boy’s same. The day-glo colors, the CHOOSE LIFE T-shirts, the sly naughtiness of the repartee between George and Andrew felt about as innocent as the shower scene in Top Gun. Yes, there were Pet Shop Boys, The Smiths, Bronski Beat, and I listened and listen to all of those, but for me the magic of validation happened when George Michael flashed that gleaming smile. Perhaps that makes it seem that the smile superseded the music, but we who got it, got that the music and the smile were the same.

With all due respect to Moz, Robert Smith, Michael Stipe, Paul Young, Howard Jones, Terence Trent D’Arby, Robbie Neville, and you’d better believe Madonna, for me it was, to the core and at the farthest reaches, all about George Michael. No one who saw me in college ever saw me without a single cross earring, a white T-shirt, a leather jacket, and as much scruff as I could muster. George Michael was sleek. He was sexy. He had blond streaks and a Mediterranean tan. And chest hair. And a tight ass. In jeans. That he shook naughtily at the same camera that caught Morrissey’s gladioli. George’s personal style was the currency with which he purchased the consumer’s attention and with which many of us affirmed our identity. It also fulfilled a function for critics, from professional to parental, to work as hard to dismiss the Greek-English gay boy as they did to dismiss the lapsed Catholic girl from Michigan.

Even die-hards wince at the mention of “Careless Whisper,” but for all of its sugary excesses, that song was a gutsy record. In it, George recorded nothing less than an authentic aria, drenched by a tidal wave of sentiment that foreshadowed countless power ballads that don’t sound half as listenable as it does. He did it with impeccable craft and a powerfully emotional vocal, and – this is important – he did it as a man. Not that emotion is gendered, but it was transgressive for a guy to sing that kind of song with such force of feeling. By comparison, “Careless Whisper” comes closest to Dusty Springfield’s “You Don’t Have to Say You Love Me,” and that is a level of queer artistry that emotes for itself.

But if the father figure whose first chart single proclaimed WHAM! BAM! I AM! A MAN! wasn’t afraid of his feelings, neither was he averse to a little hip action. “I Want Your Sex” percolated on hormonal synth riffs that foretold George’s facility with polyrhythm and dirty lyrics that foretold of the backroom swerve that would inform many of his records going forward. As solid as they are, these records provided George Michael the freedom, gotta have some faith in the sound, to create a truly historic recording: “Faith.”

With “Faith,” George Michael threw what many interpreted as a curve: he let it be revealed that he is a musical prodigy. He positioned himself in front of an Elvis jukebox, its neon tubing aglow. He allowed a church organ to play for just exactly as long as the listener can stand it, and then struck a faultless guitar riff over the tightest rhythm track since Connie Francis admonished Cupid for being stupid. And in the light of that jukebox and via the flawlessness of that groove, he shook his tight ass in faded blue jeans, and sang about trust and fidelity with a raw, rhythmic honesty that proved their connection. Everything that George Michael was or was to become as a musician is present in “Faith.” Equal parts ‘50s rock and gritty glam, “Faith” presaged the drag queen theatrics of “Too Funky,” the elder statesman groove of “Amazing,” the prismatic dry-hump of “Precious Box,” and both the homage and the here-and-now of Songs From the Last Century. And that brings us from the edge of heaven right back to Symphonica.

Symphonica may be motivated, in part, by legitimatizing the music, but those of us who were always listening will tell you that the music needs no legitimizing. It is emotional, sleek, honest and sexy. I am a grown man now, married (finally), at my own mid-century mark. I’m nostalgic by nature, am given to connoisseurship, and love a good time. I am pretty much the target demographic for George Michael. I still find that The Smiths, The Cure, REM speak to me fundamentally. I can live for a week off of the intoxicating energy of an audience’s excitement while they are waiting to see Stevie Nicks perform live.

In other words, I am a true child of the American ’80s, raised on MTV, so hardcore that I when I moved to New York City to attend art school I worked on the first Real World and so witnessed in its crucible the inauguration of the ’90s. But I also recall MTV’s tenth anniversary special. It was about as histrionic as MTV got in those days before every live broadcast had to encompass one “historic” event after another. Cher was there, and so was Jacko. George Michael performed live, wearing jeans and a backward baseball cap to Madonna’s towering powdered wig and Gaultier pantaloons. George sang “Freedom” in the round and, during that performance where he tore down divahood by letting the others have it, free is what we were. We harmonized about freedom while experiencing it while sharing it while fighting for it with voice and truthfulness and, yes, impeccable grooming. That is the sound that endures, whether it is unplugged in a pin spot or layered over orchestral opulence. It is soaring and focused at once. And ultimately, it is not just beyond legitimacy but rendering unto the very question the answer of the voice of authority.

PS. We’ve lost a lot of music greats this year. Read our remembrances of David Bowie, Prince, and Leonard Cohen.