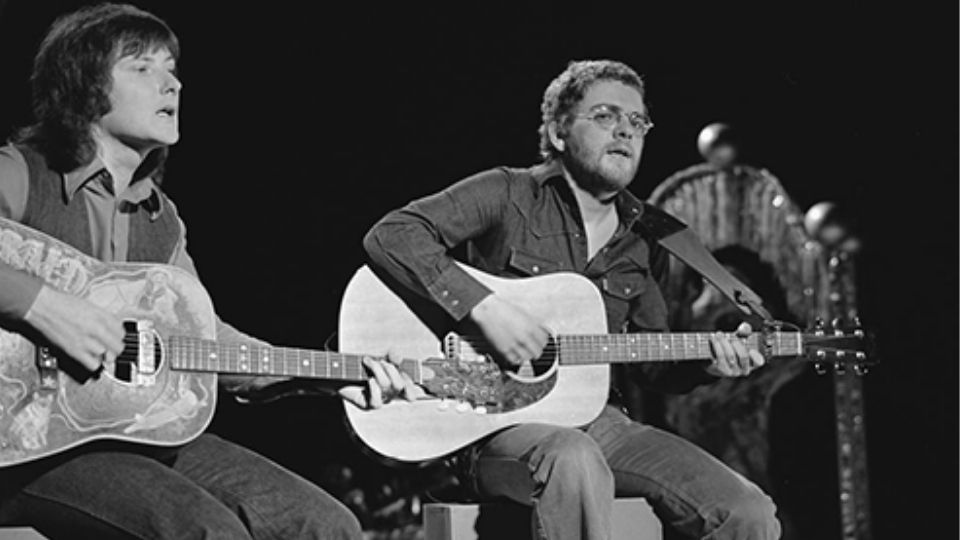 Sometimes a song has a second life, albeit in an unexpected way. That was the case with “Stuck in the Middle with You” by Stealers Wheel. When it was originally released in 1973, the catchy pop tune ear-wormed its way into the top ten on both the US and the UK charts. Then in 1992, the song was thrown back into the spotlight when it was featured in a memorable (and grisly) scene in Quentin Tarantino’s directorial debut, the crime drama Reservoir Dogs. Certainly, when co-writers Gerry Rafferty and Joe Egan came up with the tune, they had no idea it would gain a very different sort of visibility nineteen years later.

Stealers Wheel was founded in 1972 by Rafferty and Egan, who’d originally met as teenagers in their native Scotland. Rafferty had been a member of a band called the Humblebums, which also featured Billy Connolly, who later found fame as a stand-up comic. After the group broke up, Rafferty issued a solo album, Can I Have My Money Back? That 1971 release, which featured vocals by Egan, was unsuccessful, but the duo went on to form the core of Stealers Wheel. The band was signed by A&M Records, and when they entered the studio to record their self-titled debut in 1972, their lineup also featured guitarist Paul Pilnick, bass player Tony Williams, and drummer Rod Coombes.

Stealers Wheel was produced by legendary songwriters Jerry Leiber and Mike Stoller. Rafferty and Egan’s excellent tunes, with their sharp lyrics and appealing mix of pop, rock, and folk, were showcased on tracks like “Outside Looking In” and “Another Meaning” but the song that caught everyone’s fancy was the Bob Dylan-esque ditty, “Stuck in the Middle with You,” which rose all the way to number six on the US charts. The tune was an affectionate nod to the renowned songwriter’s style, and some listeners actually thought it was Dylan himself performing the song. Ironically, by the time the album was released, both Gerry Rafferty and Tony Williams had left the band. They’d been replaced by Luther Grosvenor (of Spooky Tooth) and DeLisle Harper for live shows.

Thanks to the album’s popularity with both critics and fans, Rafferty was persuaded to return to the group. Around the same time, except for Egan, the rest of the lineup was let go, and for the remainder of their existence, Stealers Wheel was essentially the duo of Rafferty and Egan, backed by various session players. Leiber and Stoller returned to produce the band’s sophomore effort, Ferguslie Park. The records’ enticing mix of mellifluous vocals, shimmering pop, and straight-ahead rockers is at the forefront of songs such as “Everyone’s Agreed That Everything Will Turn Out Fine,” “Good Businessman,” and the fantastic, Beatles-esque single “Star” which managed to reach number 29 on the US pop charts.

Despite positive reviews, the group’s sophomore effort wasn’t very successful sales-wise. Due to growing tensions between Rafferty and Egan, and contractual problems with their label, Stealers Wheel issued just one more album, Right or Wrong, in 1975. By the time that record was released, the group had already disbanded. Gerry Rafferty went on to have further hits as a solo artist with songs like “Baker Street” and “Right Down The Line,” from his 1978 disc City to City, while Joe Egan also recorded a couple of solo albums, including 1979’s Out of Nowhere. The duo reunited when Egan contributed vocals to Rafferty’s On a Wing and a Prayer, which was released in 1992. Egan eventually retired from the music business, and Rafferty passed away in 2011.

“Stuck in the Middle with You” has remained a constant entry on oldie’s playlists. Thanks to the song’s inclusion in that iconic sequence in Reservoir Dogs, the song gained a kind of cinematic pop culture notoriety. It’s been covered by a variety of artists over the years, including Jeff Healey, Grace Potter, Keith Urban, and Eagles of Death Metal. There was even a dance version of the tune released in 2000 by British artist Louise Redknapp. While “Stuck in the Middle with You” may be the song that gets stuck in your head, the rest of Stealers Wheel’s music is definitely worthy of rediscovery.

3 comments on “The One-Hit Wonder File: “Stuck In The Middle With You””