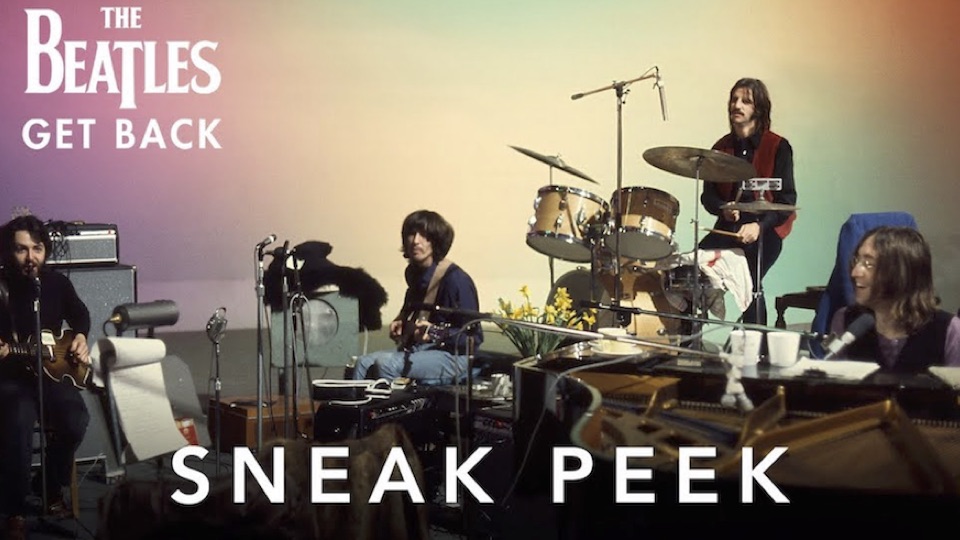 Last year, we were offered a tantalizing preview into a labor of love by noted director Peter Jackson (The Hobbit, Lord of the Rings). Here’s the backstory.

As the Beatles were winding down in the late 1960s, the most common perception was that there was so much strife between members that they could barely stand each other. Certainly, it was well-known that throughout the recording of The White Album (1968), they were developing their own styles of music, with McCartney’s pop contributions like “Ob-La-Di, Ob-La-Da,” Lennon’s avant-garde exploration “Revolution #9,” and Harrison’s soulful “While My Guitar Gently Weeps.” The passing of Brian Epstein and subsequent mismanagement of various Apple label ventures only heaped stress onto the foursome.

When work began at Twickenham studios on their next two albums, Paul McCartney (with the support of George Martin) surfaced the idea of recording the creative process, including filming the band, then having the group perform live in front of an audience and to record that as well. This would provide fans both an “under construction” and “finished product” view of the material. Director Michael Lindsay-Hogg, who had worked on previous Beatle projects, set up cameras and audio equipment throughout the studio. These “live recordings” would be assembled into a television special to be called Beatles at Work. The group arrived at Twickenham but immediately there were tensions. They disliked the studio because it didn’t have the proper equipment, was brightly lit and uncomfortable. Then there were disagreements on whether they should perform live and if so, the locale of the performance. At one point, George Harrison famously stormed out but was later coaxed back by peacemaker Ringo. Clips from those catastrophic sessions are what the general public has seen for years and have driven the perception that the bandmates’ relationships had degraded significantly.

Yet back at Twickenham, George had returned. To change the mood, the four agreed to move the recording (and filming) to the newly-built Apple Studios in upscale Savile Row, London. But the new studios lacked the proper apparatus so the crew grabbed portable equipment from the Abbey Road studios and brought it to the new locale. The change of venue, upgrades in equipment, and an invitation to Billy Preston to collaborate all contributed to raised spirits.

Songs like “Let It Be,” “For You Blue,” and “Get Back” were refined and recorded. Eventually, the Beatles decided to perform their famous rooftop show on January 30, 1969, atop Apple’s offices. This was also filmed and has been viewed by millions of Beatle fans. That afternoon, once the concert was over, The Beatles returned to the studio and turned their attention to completing recordings for Abbey Road, which was released before their final album Let It Be, despite material for the latter having been completed earlier.

Once Abbey Road was completed, the group asked engineer Glyn Johns to pull together a release that would include songs and associated film segments from the sessions to be released simultaneously,  and tentatively called Get Back. In January 1970, Paul, George, and Ringo had to return to finish a version of Harrison’s “I, Me, Mine” which appeared on the film but had no completed audio version.

Ultimately, this project was abandoned as The Beatles were dissatisfied with the song selection and mix. Phil Spector was brought in, who added his “wall of sound” treatment to songs like “The Long and Winding Road.” This was not well received by McCartney, but Let It Be was finally released in May 1970.

During the tumult of filming, recording, playing live, and storming out there were over 56 hours of footage from 1969 that was never released to the public, along with 150 hours of previously unheard audio. And this brings us back to Peter Jackson’s upcoming film, The Beatles: Get Back.

Though originally targeted to be released in September 2020, the film has been pushed to November 2021. However, a teaser was just shared that provides a glimpse into the camaraderie and love that the band shared – and it’s a pleasing preview into what we can expect. In the nearly 6-minute segment, it’s hard not to smile while watching the group pal around and bring the shenanigans. Lennon delivers some chuckle-worthy looks at the camera and introduces the band as “The Bottles.” And Paul should have been nicknamed “the silly one” based on his antics.

Ringo and Paul have both commented on Jackson’s work as being more honestly reflective of the brotherhood that the group shared at that time. Frankly, I think we could use this extra dose of joy right about now.

5 comments on ““Get Back”: Peter Jackson’s Sneak Peek”