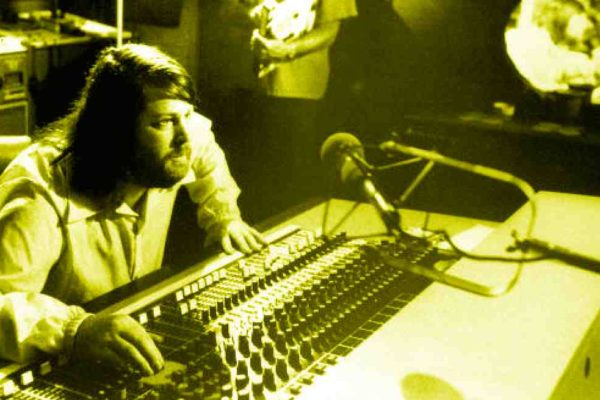 Q: Before writing the original edition of the book, you started out as a fan of Brian and The Beach Boys, and even published a fanzine about their music. What was it like for you to go from being a fan to becoming a close friend and collaborator of Brian’s? Few people get to meet their heroes, much less work with them professionally and become good friends with them.

A: I was definitely an obsessive fan; when I was 19 and in college, people would say “You’re a little bit crazy about Brian Wilson, aren’t you?” My mission in writing the book was that Brian be treated well by the world and recognized for how great he was. I began as a fan and a journalist with a story to tell, but I hadn’t experienced things firsthand. I wanted to grab the world by the shoulders and say “Hey, pay attention to this guy. He’s not just someone who stayed in bed for three years, he’s actually important.” That I became his friend in the process is beyond surreal. It’s one of the joyous experiences of my life.

Q: The book is an insightful portrayal of Brian and The Beach Boys. It’s an authoritative, not exploitative, look at their history. You eloquently use the creation of the music as a backdrop to tell the story of Brian’s triumphs, as well as his deeply personal struggles, and ultimate redemption. The music and those struggles seem inextricably linked. In this most recent update to the book, I felt that you came at the story, especially Brian’s, from a truly emotional place.

A: I think I gave myself license to do that in this new edition, because of the experiences that I’ve had with Brian. You could write ten books about it. Or you could just listen to the music, because (the story) is there. Listen to “I Just Wasn’t Made For These Times” or “Til I Die,” and you’ll hear an artist who, as Jimmy Webb once said, gave us (meaning, songwriters) “license to put our feelings into what we were saying in our songs.” That’s extremely important to understand, even from an outsider’s point of view, but to be on the inside, and see how Brian really felt, and experience the terrible treatment he received, I wouldn’t know how to write about it without emotion. The book, especially this new edition, is designed to be a celebration of what Brian has accomplished, despite all he’s been through.

Q: Why do you think it took so long for the myth or general perception of Brian as just an eccentric, troubled artist to change, and for the genius of his work to be appreciated and understood? I felt I really got to know him, both as an artist and a person, through your empathetic portrayal of him in the book.

A: It’s funny because Danny Hutton (of Three Dog Night), who is perhaps Brian’s best friend of the last 60 years, said in the documentary I Just Wasn’t Made For These Times: “when you’re having hits, you’re eccentric, and when you stop having hits, you’re crazy.” We don’t think of Brian as a normal person, because there’s this image of him, but he was normal; Brian liked to make people laugh, and that’s what his high school friends told me, when I spoke to them. The whole point of the SMiLE album was to make people smile. The cliche is that “laughter is the best medicine,” and Brian needed that medicine as much, if not more than, any of us. The success that he had in the 1960s was very difficult to survive. Brian had it all, he had the songs, he had the ability to bring those songs into the world, and the world paid attention. Unfortunately, Brian also lived in a world with a record company, and a group, who weren’t necessarily in tune with what was happening with him. So there was pressure to “stick to the formula, stick with what works.” Every family has its feuds, and when you’re famous it gets magnified. You can see it in the pictures from back then, there’s something melancholy about him. It came out in the music instantly: “In My Room” is one of the first songs that he wrote. Did you want to go to “Surf City” and have ”Fun, Fun, Fun,” or did you want to connect with his heart, with “Warmth of the Sun,” and “Don’t Worry, Baby.?” It was his heart that I connected with.

Q: Brian’s talent and his brilliant music are clearly loved and respected by his fellow musicians. I enjoyed reading the stories in the book from artists like Linda Ronstadt, who talk not only about working with Brian, but the meaningful personal experiences they had with him. It’s obvious that they aligned with Brian not just musically, but found a spiritual connection with him as well. Did any comments from Brian’s peers surprise you?

A: For Sir George Martin to say to me that Sgt. Pepper was “our attempt to equal Pet Sounds” is just stunning to me. Leonard Bernstein thought enough of his music to feature him performing “Surf’s Up” on a TV special in 1966. Linda Ronstadt’s stories are taken from her autobiography. The part about working with Brian in the studio, and him figuring out the harmony vocals, a bunch of people could have told a story like that, but the one about Brian showing up at her house, and holding out his hand with some change in it, saying “I need to get this grape juice, I’m a little short, can you help me out?” That story is heartbreaking to me, as are many of the other stories I’ve heard from the various people who were his guardian angels throughout the years. Brian was alone, and whatever he was searching for, he could find in his music, he could find it in a piece of cheesecake, he could find it in uppers, but finding it in a person, that was a much more difficult thing for him. But there are people who loved him and cared about his music. They really loved Pet Sounds, or “Til I Die,” and some of these people are now in Brian’s band (Darin Sahanaja of The Wondermints), or are part of his inner circle.

Q: Speaking of SMiLE, you were instrumental in inspiring Brian to get that album completed and released in 2004 as Brian Wilson Presents SMiLE. Part of the impetus for that project was that you helped convince Brian to include some tracks from the original SMiLE sessions on The Beach Boys’ Good Vibrations box set in 1993. Helping to get SMiLE out there must have been a proud moment for you.

A: Well, it’s beyond proud, it was a remarkable series of events that I was sometimes fully, sometimes partly, responsible for: getting SMiLE music on the Good Vibrations box set was a great triumph, for Brian, for The Beach Boys, and for music lovers. I remember doing that; it was the first time where Brian and I worked together. Going to Brian with the track listing and treating him like the man who created this music, as opposed to saying “here’s what I think should be done.” Just talking with him one- on-one as an artist, and letting him know there would be a giant hole (in the box set) without including songs from the SMiLE sessions. It was as simple as that, treating him with respect. He’d been told for so long that this music was inappropriate, that it wasn’t right for the times, or for the band, and he’d accepted that. Then things started to change. He added these songs to his set list on tour, and got standing ovations. The love and acceptance he received, all of that was changing his mindset. He said, “Wait a minute, I was told Pet Sounds was wrong for the group, and now I’m getting standing ovations for it?” He embraced Pet Sounds, and he embraced the creative side of his life that had been snuffed out. Was I responsible for him finishing SMiLE? No, but I helped. Once he recorded SMiLE and began performing it live, he said the demons just left him. He just loved playing those songs: it’s just joyous music.

Q: The update to the book is a significant one (over 60,000 words) bringing Brian’s story (as well as the story of your connection with him) full circle. You share some wonderful stories about your friendship.

A: Honestly, because the original book has become a collector’s item, I didn’t want to change that portion of it. I wanted it to be judged on what it was. When I was working on the update, I said to the publishers: We have to make sure the update is so big and filled with so much stuff, that it’s like a book on its own, so that somebody who has the original, or the 1985 edition, doesn’t say “so what do I need to buy this one for? The idea was “Here’s the journey I went on with Brian.” I’m essentially interviewing myself for the update, to give the story context. From 1985 on, I was living through it. I was capturing my feelings. Brian’s my friend, and I had to explain that so that people understand it. Sometimes we’re friends and sometimes we’re working together. But the friendship always took precedence, and it still does. He’s given my life so much and given the world so much.

Q: Many of the people you spoke to celebrate Brian and refer to as him “the most important musical artist of his era.” Is that what you want people to take away after reading the book?

A: I think it would be a great takeaway; that’s based on the people I talked to and the quotes they gave me. I don’t have a Ph.D. in music, but what Brian accomplished as a composer, arranger, and producer, nobody was doing in terms of popular music at the time, and it put him on a different level. There’s a spiritual quality to Brian and his work that defines it all. I remember a quote from him in 1966 saying that SMiLE will be a “teenage symphony to God.” When I wrote about it I didn’t understand it, and now having gotten to know him and seeing how he’s overcome everything he went through and does what he does, I understand what he meant.

God Only Knows: The Story of Brian Wilson, The Beach Boys and the California Myth is essential reading for fans of Brian’s incredible work. Follow this link for more information on obtaining a copy of this phenomenal book: https://amzn.to/3zNkbbp.

0 comments on ““God Only Knows: The Story of Brian Wilson””