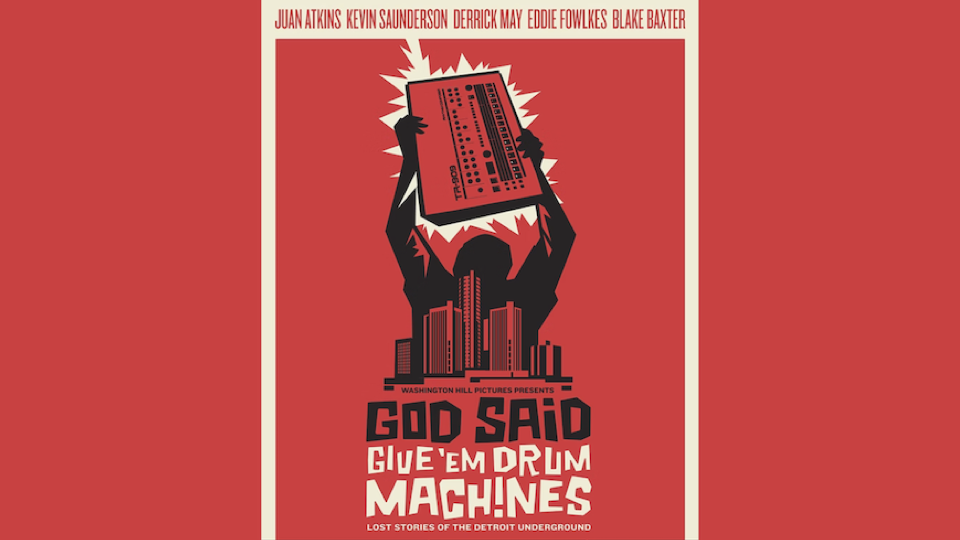 Few cities in the world can compete with Detroit’s music-making chops. The birthplace of Motown, a hotbed for jazz and boasting one of the world’s most illustrious rock ‘n’ roll histories, Motor City runs to the rhythm of countless pioneering musicians. What’s less well known, however, is that techno’s origin story also begins in Detroit. God Said Give ’Em Drum Machines, a feature-length documentary directed by Kristian R. Hill and produced by Jennifer Washington, seeks to set the record straight on techno, giving due credit to the six Black artists who revolutionized dance music in the 1980s.

Twelve years in the making, God Said Give ’Em Drum Machines takes a deep dive into techno’s journey from Detroit’s underground clubs to its enduring popularity in Europe, focusing on the first-hand stories of Juan Atkins, Blake Baxter, Santonio Echols, Eddie Fowlkes, Derrick May, and Kevin Saunderson – otherwise known as the Techno Six. Sitting alongside these personal accounts are archival footage and talking heads with other influential artists like Mike Huckaby, Paris Grey, Seth Troxler, and Richie Hawtin, who share their thoughts, appreciation, and individual histories in an effort to shed light on the genre’s overlooked innovators.

Early on, the documentary weaves its presentation of the Six with critical context on US dance music history, citing The Great Migration and its subsequent dispersal of blues and gospel as precursors for the sounds of the future. As we go on to learn, electro, funk, and hip-hop all underpinned the progression of techno’s sound. As did, of course, new developments in technology. We’re introduced to the early synthesizers and Roland drum machines that were seminal in the evolution of techno’s early beats, all while learning how sci-fi, Alvin Toffler’s 1970 book Future Shock and key collaborations – particularly with Richard Davis – led to Juan Atkins becoming the inventor of the genre.

Despite the Black origins of the sound, however, the documentary highlights within the first few minutes how whitewashed techno and its wider genre of EDM (Electronic Dance Music) have become. Citing Pat Boone’s lifting of Little Richard’s “Tutti Frutti” as just one of many instances of Black-created music being appropriated by white artists, the documentary clearly puts forward the same argument for electronic music at large.

But what’s made clear too, aside from the music industry’s neglect of Black creators, is a group dynamic between the Six that never truly translates into friendship. Instead of a close bond, we get a sense that they are more like-minded collaborators, whose relationship was forged over a mutual appreciation of hardware rather than any emotional connection to one another. Mismanaged success, miscommunication, and the strains of fame see the Six eventually separate, but what endures is a shared hand in shaping one of the world’s most popular and profitable musical genres.

From its origins in Detroit’s underground clubs to its dissemination in Europe and its hand in unifying East and West Germans after the fall of the Berlin Wall, techno music’s history comes to life through God Said Give ’Em Drum Machines in a way that feels accessible, even if you don’t know your TR-808 from your TR-909. While the film could have been more transparent about Derrick May’s sexual assault allegations which were only briefly mentioned towards the end, it nonetheless offers a valuable and wholly satisfying slice of music history that’s as nostalgic as it is informative. More than anything, the film is a love letter to the city of Detroit and its people, whose musical innovation and creativity are given the celebration and recognition they deserve.