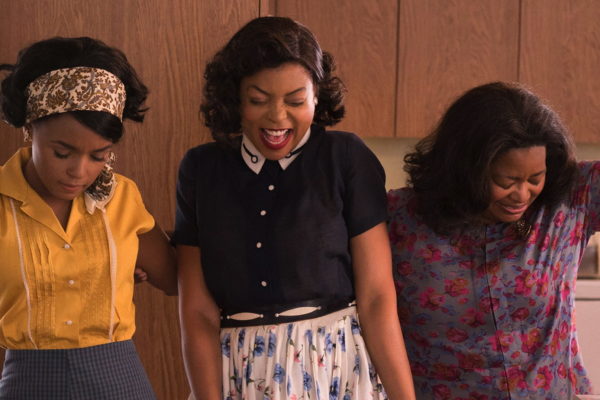 When we meet our three heroines in Hidden Figures, their car is broken down on the side of the road yet they’re not stranded. Dorothy Vaughn (Octavia Spencer) is underneath the hood with a wrench. Katherine Johnson (Taraji P. Henson) tests the ignition. Mary Jackson (Janelle Monáe) notices the cop. They all freeze as the white male police officer questions them — three black women alone in segregated Virginia in the 1960s. He’s aggressive at first, but softens once he finds out they work for NASA.

The trio pacify him and tell him they know all the famous astronauts until he offers to escort them to the Langley Research Center, where they are mathematicians in the all-black West Computing group. Vaughn fixes the car and they’re off. These are women who seek and find solutions to problems; their primary question is actually “Why not us?”

Amidst the frantic race against Russia to send a man into space, Johnson is assigned to a special project, calculating for John Glenn’s orbit around the globe. When she enters the office, however, one of the engineers says, “You forgot to empty this last night,” pushing a trashcan into her hands. On day two, a coworker puts out an electric kettle labeled “colored.” It’s that kind of world, the kind of world in which Johnson’s forced to sprint half a mile to the “colored-only” bathroom until she hits her breaking point, after running in a rainstorm: “I work like a dog, living off a pot of coffee the rest of you don’t want to touch.”
[amazon template=right aligned image&asin=B0166JFFD0] That’s when her supervisor Al Harrison (Kevin Costner) throws the kettle away, and tears down the “colored women” sign above the bathroom thereby de-segregating NASA. Later in the film, Johnson’s friend and colleague Jackson de-segregates the all-white high school in order to take night classes to become an engineer. Despite being continually disrespected, underestimated, and dismissed, these are women who speak up and fight back.

Vaughn, after being denied a supervisor position because they’re not hiring one for “colored women,” teaches herself NASA’s new IBM computer system. She’s aware that this technology could put her and her team out of the job. She becomes an expert and eventually is hired to head up the program. She insists on bringing the entire all-black, all-female computing department with her. “Movement is movement for all of us,” Vaughn says.

Johnson goes on to successfully calculate the launch and landing points for Glenn’s journey, Vaughn becomes the first black supervisor at NASA, and Jackson ends up as NASA’s first black female engineer. As if that weren’t enough, while these women are making history in space travel, they’re also overcoming everyday oppression, from their daily commute to their coffee break, sometimes with people who don’t even understand their own complicity. In one particularly powerful moment, Vaughn’s white supervisor Vivian Michael (Kirsten Dunst) tells her, “Despite what you think, I don’t have anything against y’all.” Vaughn replies, “I know you probably believe that.”

Hidden Figuresdepicts an important part of history. It’s the story of America winning the Space Race as one large, multicultural entity, some of whom had to work much harder than others because they weren’t just challenging gravity but also the status quo in order to achieve the impossible.

PS. Be sure to check out our reviews of other Oscar nominees Moonlight and La La Land.