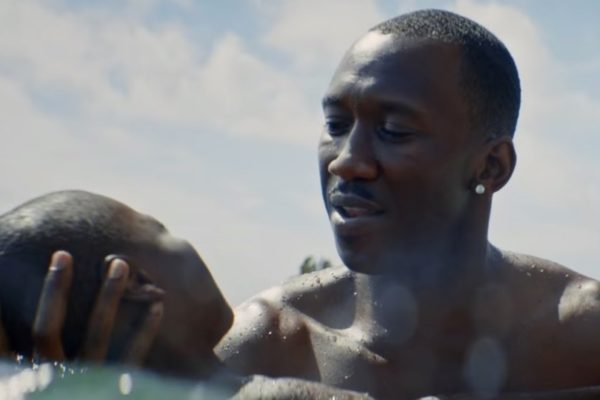 Sprinting through the backstreets of 1980s Miami, a young Chiron (Alex R. Hibbert) breaks into a condemned building in search of refuge from some bullies. A local drug dealer named Juan (Mahershala Ali) unexpectedly comes to his rescue. When Chiron refuses to speak, Juan eventually takes Chiron home to stay with him and his girlfriend Teresa (Janelle Monae) for a night. Initially. As you might guess, things get more complicated from there. Never improbably so, mind you. Never impossibly so either. Because Barry Jenkins’ Moonlight is about those unlikely but necessary connections in life that make it painfully, beautifully real. Wonder why it’s up for so many awards? That’s one perfectly good reason.

Based on a story by gay black playwright Tarell Alvin McCraney, Jenkins’ exquisite film is, in a way, three related shorts — each chapter about a particular time in Chiron’s life, each story building on the previous one. All of it’s raw; all of it’s heartfelt. Even as Jenkins is turning every cinematic stereotype of black men on its head, we’re witnessing Chiron, a gay young African-American man struggling to find his place in the world.

Juan takes Chiron under his wing and it’s a complicated relationship for many reasons: one being both of them are aware that Juan sells crack to Chiron’s drug-addicted mother. But a familial bond is formed as Juan teaches Chiron how to swim, a moment that Jenkins described to the New York Times as one of “spiritual transference.” Once back on the beach, Juan tells Chiron, “At some point, you gotta decide for yourself who you’re gonna be. Can’t let nobody make that decision for you.” And so, Chiron grapples with this concept. Who is he? Who does he want to become? In one especially touching moment, a young Chiron asks Juan what a “faggot” is. “A word used to make gay people feel bad,” Juan says simply.

This kind of unconditional love is exactly what Chiron’s home life is lacking. His mother is too consumed by her growing addiction to deal with school bullies or to teach self-empowerment. She can’t help him answer questions she’s never dared to ask herself. But Chiron finds other teachers. “I ain’t soft,” he tells his friend Kevin (Jaden Piner) on the football field. “Don’t mean nothing if they don’t know,” Kevin replies before they engage in a kind of play-fight that feels like both a ritual and an acceptance.

Throughout, Jenkins is exploring this idea of masculinity as performance. When an older Kevin (Jharrel Jerome) and a teenage Chiron (Ashton Sanders) sit together on the beach, Kevin says, a nice breeze can feel so good it “makes you want to cry.” Chiron sees this as an opportunity to open up. “Do you cry?” he asks before admitting he himself does. And for the first time, under the titular moonlight, the weight of expectations is lifted and love ensues.

“Who is you, Chiron?” is the question posed in the film’s final act. Chiron (Trevante Rhodes), an adult now, is still desperately trying to find out. Whether he learns that answer is probably a question best left for viewers to argue passionately about after the film. In truth, Jenkins isn’t attempting to serve up easy answers with Moonlight. What he does do is offer us the privilege of witnessing a life still-in-development under less-than-ideal circumstances.

PS. Manchester by the Sea is another film getting a lot of recognition lately. For more on its star, check out our post 5 Casey Affleck Movies That Prove He’s the Affleck to Watch. You may also enjoy our posts Sundance’s Magnificent 7 and Jail Time: Ava DuVernay’s “13th” on the Evolution of Racism.

0 comments on ““Moonlight”: A Heartbreaking Meditation on Masculinity, Sexuality & Race”