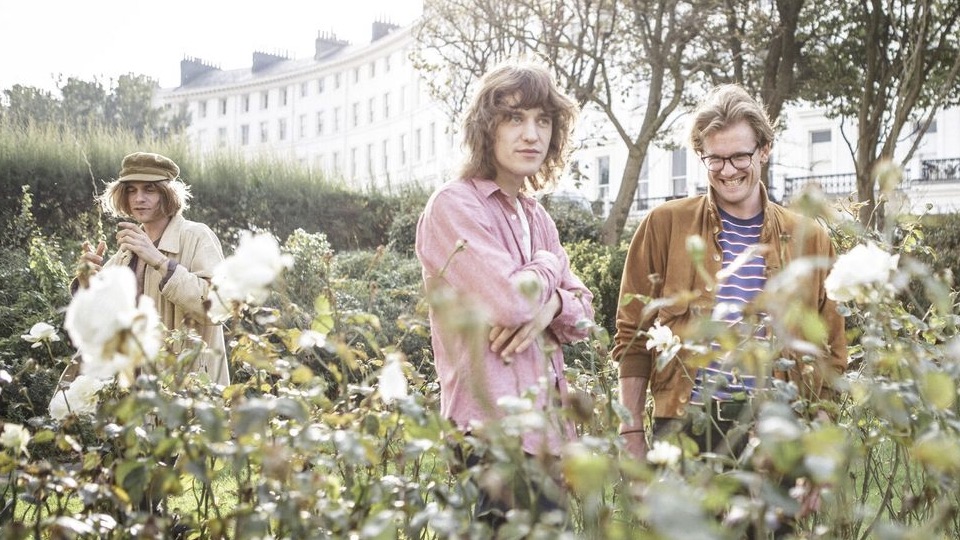 Hollow Hand is the psych-folk project of Brighton, UK-based Max Kinghorn-Mills. Working with fellow band members and co-producers Pan Andrs and Atlas Shrugs in a rehearsal space-studio called “Cosmic Ocean,” Kinghorn-Mills and co. recorded the endearingly lo-fi full-length Star Chamber, released on Talkshow Records last October. The songs cover themes both cosmic and earthly: like what matters most at the end of the world (“End of Everything”) or the ineffable pleasure and sweet pain of love (“Blackberry Wine”). Kinghorn-Mills’ sound evokes luminaries like Syd Barrett, Kevin Ayers, Robert Wyatt, Emmit Rhodes and Something Else to Lola-era Kinks. If that sounds intriguing grab hold and take a stroll with Hollow Hand.

“A World Outside” opens with natural sounds that conjure a walk down a country lane—complete with a cheery voice saying “Good morning!”—while a nylon-stringed guitar plays a gently descending line and we ease into the sun-dappled, pastoral universe of Hollow Hand. The song breezes along on jangly guitars and buoyant harmonies, occasionally kicking into a higher gear with crunchy, fuzz-toned chords but always coming back—albeit briefly—to the wistful guitar line that opened the track. Slight shifts along the way are never jarring but do keep one guessing: like momentarily losing one’s way down a wooded path only to emerge into the light again. A wonderful bit of timeless, sepia-toned pop.

The titular drink in this song is either an alchemical liquid with supernatural properties or simply a bottle of cheap booze that makes the object of the dreamy narrator’s affection pay no mind to the “painted design” he made just for her. The lyrics move from poetic (“All of the king’s men watch when you’re speaking … All of my silver just to know what you’re thinking”) to the prosaic (“How many weekends are you working?”) and it feels kind of like love does in the modern age—reaching for the grandiose to make the ordinary more palatable. Sometimes romance, art, and wine simply prove how much we yearn to see things through rose-colored glasses.

“Avalon” moves effortlessly from a Chaplin-esque shuffle to a courtly air and back again, aided by a regal piano and electric guitar. This song would not have been out of place on The Kinks’ Something Else or The Village Green Preservation Society. It also harkens back to music hall and, thematically, to Arthurian legend. Who can fault Kinghorn-MIlls for mining his country’s rich traditions for our entertainment? He wouldn’t be the first English-born songwriter to do so.

Kinghorn-Mills’ packs a lot of ideas into each song. Sonic layers and chord progressions build towards something and then just as quickly the mood shifts to satisfy some other whim. It’s an audacious act of plate spinning that’s thrilling when it works but could collapse into a sonic mess in lesser hands. Kinghorn-Mills is in full command, though, and the prog-like changes that propel “End of Everything” allow just the right flourishes to get in and out without overstaying their welcome. It’s just one of the many examples of the kind of magic Kevin Ayers created on his 1969 masterpiece Joy of a Toy and Ray Davies delivered on any number of his late-60s gems. That’s sacred territory but I believe Kinghorn-Mills and Hollow Hand are proving worthy of such comparisons.

2 comments on “Hollow Hand: If You Love Late-60s-Era Kinks…”