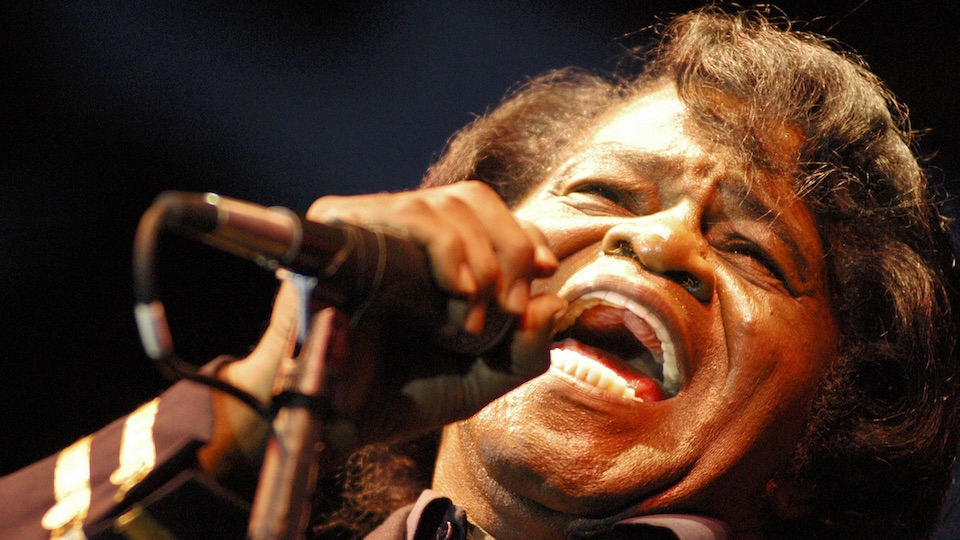 “The Godfather of Soul.” “Hardest Working Man In Show Business.”  “Soul Brother Number One.”  “Mr. Dynamite.” James Brown earned these well-deserved titles during his career. We all know the incredible dance moves (many of which would be mimicked by other artists). The super-tight musicians that he worked with. The songs that still get us dancing in the kitchen (OK, maybe that’s just me)… in the car …or wherever. His appeal is timeless. James Brown’s influence can be seen and heard in artists ranging from Mick Jagger to Michael Jackson and far, far beyond. And one of the reasons we’re now so familiar with Mr. Brown occurred on May 1st, 1966: James Brown appeared for the first time on The Ed Sullivan Show. Instead of the usual studio set-up, he insisted on bringing his complete band – and thus, gave middle America a taste of the “full” James Brown Show.

He would appear again later in 1966, but as with the Beatles, this first “Sullivan Show” appearance was an astonishing moment in show business.

In honor of that big James Brown milestone, here are some facts you might not know about this amazingly influential artist:

-He was born “Joseph James Brown” in 1933 in South Carolina. The names were reversed on his birth certificate. (Sorry, but “Joe” Brown just doesn’t have quite the same ring. Thank you, Music Gods.)

-He claimed that he had some Chinese ancestry.

-In his teens, Brown had a short career…as a boxer.

-Rolling Stone lists him at Number 7 on their list of “The 100 Greatest Artists of All Time.”

-Brown’s first “real” group was The Flames. But he started out as their drummer. After a few songs, they realized their goof and moved him to frontman. Wise choice.

-“Please, Please, Please” was James Brown and the Famous Flames’ first big chart hit. The title came from something Little Richard had scrawled on a cocktail napkin. Brown created lyrics (or whatever) around it. In 1956, it reached #6 on the R&B chart. (Watch below for the legendary “cape bit.”)

-In 1962, his band’s version of “Night Train” was their first entry onto the Billboard Hot 100 chart.

-Hard to fathom, but James Brown never had a #1 Pop hit. But there was some consolation: he had a total of 96 songs that reached into the Billboard Hot 100. That ranks only second to Elvis Presley.

-Brown had a long and difficult history with many band members (mostly related to money issues). Bootsy Collins and Maceo Parker are two famous names who left Brown’s act (they moved on to work with George Clinton, Prince, and many others).

-Brown was married four times. Lord knows the stories those wives could tell…

-He ranks as the “Most Sampled Artist” of all time.

-Brown has a statue in his honor in Augusta, GA,

-At one point in the late 60s and early 70s, Brown tried to reach outside of his base by recording a couple of albums of jazz standards. Then, he did some Christmas albums  (three of them, in fact).

-By the time the 60s ended, James Brown owned a Lear Jet, three radio stations and his own publishing company. Kudos for trying to push his business forward (although not long after, he would face complicated tax issues).

-In 1987, Brown appeared in an episode of Miami Vice. (Scoping it out on YouTube? The episode is called “Missing Hours.”)

James Brown: one of our great American musical treasures. All hail, the Godfather of Soul. Now… “get on up.”

0 comments on “17 Things About James Brown”